Learning Hindi has been made exciting and accessible by the subject matter experts at Vedantu with their lucid explanations of NCERT solutions for Class 11 Hindi Aroh Chapter 2 Miyan Nasirudden. Students can take their time to go through these solutions for a complete round-up of this chapter. The simple words and easily comprehensible NCERT solutions Class 11 Hindi miya nasiruddin will help students in getting better grades in Hindi.

The stellar team of Vedantu has followed the CBSE curriculum so that students will find Class 11 Aroh Chapter 2 solutions beneficial from an exam point of view. 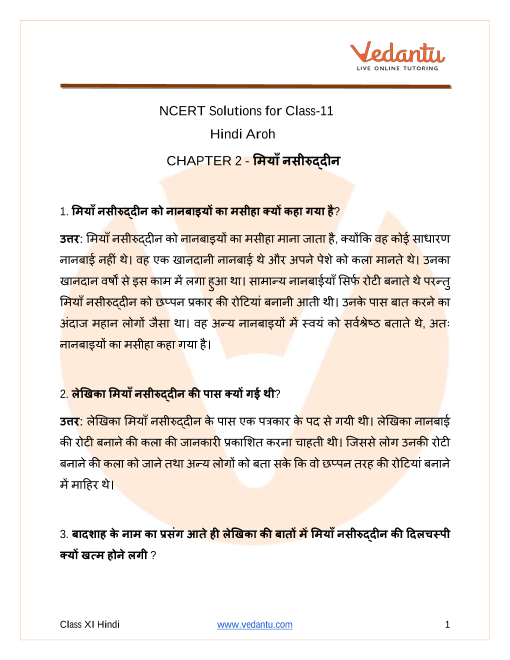 If you get the NCERT solution of Class 11 Hindi Aroh Chapter 2 in PDF form, then you can quickly revise all the main points of the chapter at your leisure. Class 11 Hindi Aroh ch 2 NCERT solutions PDF can now be downloaded from the official website of Vedantu anytime and from anywhere. Students can save them on their devices for offline viewing, even without internet connectivity.

Krishna Sobti is an eminent writer of her times who brought a fresh style of writing to Hindi literature. She was born on February 18, 1925, in Western Punjab which is now part of Pakistan. She passed away on January 25, 2019. Some of her most famous works include Zindaginama, Dilodanish, Ae Ladki, Samay Sargam (novel), Surajmukhi andhere ke (collection of stories), and Ham-Hashmat (memoirs). She has received many accolades and awards like Sahitya Academi Samman, Shalaka Samman from Hindi Academy, and many other national awards.

Krishna Ji is of the view that writing less brings out a special kind of creative writing. She earned her set of elite readers with her controlled and clean writing. She holds a special and permanent place in the Hindi literary world and has given many memorable characters like Mitro, Shahni, Hashmat, etc. Amongst all the classics written about India and Pakistan, Krishna Sobti’s works surely top the list. Her creation, “Zindaginama” holds the same high place in literature as the works of many prominent writers like Rahi Masoom Raza’s “Aadha Gaon”, Yashpal’s “Jhootha Sach”, and Bhishma Sahni’s “Tamas”.

In her memoirs, she has created a character Hashmat, who is her alter ego and presents her excellent experimental style of writing. The story presented here “Miyan Nasiruddin” is part of her Ham-Hashmat collection.

This story revolves around a hereditary baker, Miyan Nasiruddin. The writer has described the quirkiness and other specialities of this baker’s multidimensional personality through a funny anecdote. It explains how Miyan thought of his baking prowess as art and pompous about his capabilities to bake a huge variety of rotis.

One afternoon when the writer is roaming around Jama Masjid, she comes across a dark shop where a massive amount of dough was getting prepared. This piqued her curiosity, and she decided to go inside to find Miyan Nasiruddin enjoying a smoke on his bed. His face was shining with the attitude of an expert artist.

Initially, he thinks of her as a customer, but upon her way of asking, he realizes she is a journalist. She asks him from where did he learn how to bake to which he replies arrogantly that it is in their tradition and he belongs to a family of bakers. He learned it from his father. She further asks him what lessons did he learn from his ancestors to which instead of replying to her, he starts counter questioning. The writer finds his talks out of place and weird, and he just keeps weaving words around inane talks.

The writer then tries to understand if there are other bakers around and is again met with the same arrogance where he replies that there are many but no one who has inherited it as a family tradition. He then tells her that his ancestors had once cooked a novel dish for a king but refuses to tell her what that special dish was.

When she tries to know the name of the king for whom his ancestors worked, he starts giving roundabout answers and says a king’s name is king nothing else. The writer wants to know if he has kids, but the expressions on Miyan Nasiruddin’s face are so stern that she drops the idea of asking that question.

He tells the writer that he respects his subordinates and pays them for their work in the best possible manner. Miyan then loses interest in conversing with her so when she asks what kind of rotis were baked in his oven, he mechanically gives out some names like Sheermal, Bakar Khani, roomali, etc. to get rid of her. He lastly adds that there is no more such connoisseur of food that existed in the old days.

The writer is left very impressed with the passion and dedication of Miyan Nasiruddin to his profession.

CBSE Class 11 Hindi Aroh Chapter 2 solutions prepared by the team of experts at Vedantu is an invaluable resource for learning Hindi chapters for Class 11th students. Students would find it very beneficial because of the following reasons:

Q1 - Why did Miyan Nasiruddin lose interest in conversation when the writer asks him about which King did his ancestors work for?

Ans - Miyan Ji loses interest in the writer’s questioning when the topic turns towards the king’s name since he was not aware of it. He has only heard these stories from others, and the truth was that his ancestors never worked in the royal palace. That is why when the writer asks which special dish did their ancestor make for the king; he was unable to name it.

Q2 - List out some of the good qualities of Miyan Nasiruddin as learned in this chapter.

Ans - Some of the good qualities of Miyan Nasiruddin’s personality which comes out in this excerpt are: