Subtraction of Vectors for JEE

A vector can be defined as a quantity, measurement, or object that has both a magnitude and a direction. It is one of the most important and basic concepts in Physics that finds its applications in almost all the branches of the subject. A vector can be visualised geometrically as a directed line segment. The length of the line segment corresponds to the magnitude of the vector and the arrowhead corresponds to the direction of the vector. The direction of any vector is defined from its tail to its head where the arrow is there.

Most common examples of vector quantities include force, velocity, acceleration, displacement, momentum, electric field, etc. Basic algebraic operations can be applied to vectors, but they have their own rules for these operations. We cannot add or subtract vectors like we add or subtract numbers. Vectors have directions too, so this has to be taken into consideration. We will look at how to subtract vectors in detail in this article. 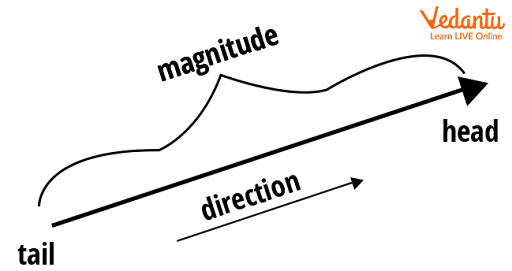 Image: Geometrical representation of a Vector

What is Subtraction of Vectors?

Suppose there are vectors a and b. The subtraction of these vectors is represented as, a-b. In simple words, it is just the addition of the vector -b to the vector a. It can be written as,

Let’s continue with the same vectors a and b. These vectors can be visualised in space as given in the diagram given below. To apply the parallelogram law the vectors have to be coterminal or their initial points should coincide. 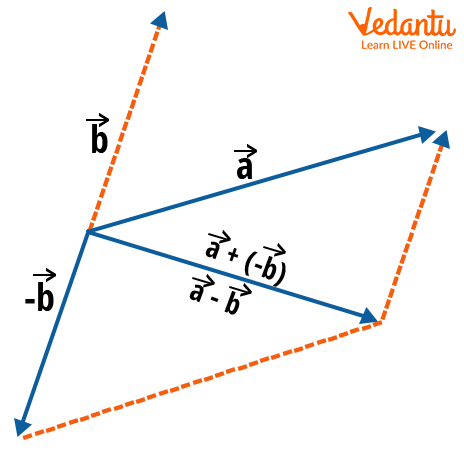 The above figure shows vectors a and b. Now subtraction basically means adding -b to a. If we rotate the vector b by 180°  and then add it to a, we’ll have our answer. The figure below helps visualise this process.

It can be visualised by using the figure below. 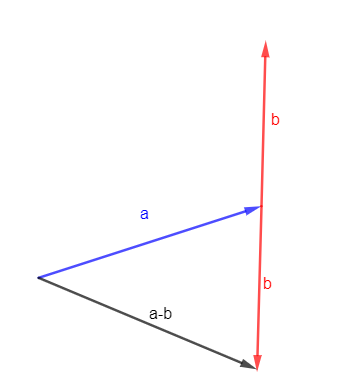 Here the vector b was rotated by 180° and then the resultant was drawn from the initial point of a to the tip of -b to get a-b.

Let’s continue with vectors a and b. Apart from the graphical ways of subtracting the vectors, they can also be subtracted by subtracting their respective components from each other. Let,

The respective components can be subtracted to get a-b.

This is the vector subtraction formula. This can be extended to any number of components that the vector has.

The subtraction will be given as,

Similarly, the triangle law can also be used to find the subtraction of vectors. The vectors have to be arranged by keeping the initial point of the second vector on the tip of the first vector and then drawing the resultant from the initial point of the first vector to the tip of the second vector. Also, the individual components can be subtracted to get the subtraction.

FAQs on Subtraction of Vectors for JEE

1. How do you add and subtract multiple vectors?

Multiple vectors can be subtracted in the same way used to subtract two vectors. Taking two vectors at a time and then repeating this process will allow subtracting any number of vectors. The parallelogram law of subtraction can also be used to subtract multiple vectors by arranging them in the form of a parallelogram and then forming diagonals from the initial points and then using this diagonal as one vector and subtracting another vector from it.