What is the Global Financial Crisis?

The Global Financial Crisis of 2008 was the result of a series of events, each with its own trigger, leading to the near-collapse of the banking system. It hit individuals and institutions around the world. The crisis is often called the 'Great Recession’ and did not come overnight. A recession is considered when a country's economy faces negative gross domestic product (GDP) growth, rising unemployment, declining retail sales, and declining income and manufacturing activity for an extended period of time.

There were many factors that led to the crisis, and its effects continue to this day. It was an epic financial and economic meltdown that cost many ordinary people jobs, life savings, homes, or all three. Looser credit requirements combined with easier money spurred a real estate boom that fueled speculation, boosted home prices, and created a real estate bubble. 2008 Subprime Crisis: How It All Started?

The changes in banking laws began in the 1980s that allowed banks to offer mortgages to subprime customers. Consumers took advantage of cheap credit to purchase durable goods such as appliances and houses. People who couldn't get a traditional mortgage were happy to be approved for these interest rate loans. As a result, between 2001 and 2007, the share of subprime mortgages doubled from 6% to 14%.

Now Instead of finding a credible solution, they decided to keep raising interest rates. They thought they could recoup their losses by paying regularly or at least charging higher interest rates to those who made a conscious effort to pay. The tax rate increased from 2.25% to 5.25%. Plagued by huge interest rates, defaults only increased. Banks promised safety and security with higher returns, but their actions weren't the same.

Causes of the 2008 Global Financial Crisis

The 2008 recession reasons are discussed below.

Financial deregulation was a major contributor to the 2008 financial crisis. The expectation that house prices will continue to rise led households, especially in the United States, to go into debt recklessly to buy and build homes. Similar expectations for property prices also encouraged developers and households to over-borrow. Many mortgages, especially in the United States, were close to or even exceeded the purchase price of a home.

So, the mixture of free credit score necessities and reasonably priced cash spurred a housing boom, which drove speculation, pushing up housing expenses and developing an actual property bubble. As a result, whilst house expenses commenced to fall, banks and buyers incurred huge losses due to the fact they had borrowed so much.

Meanwhile, after the year 2001, investment banks looking for easy profits created collateralized debt obligations from mortgages purchased on the secondary market. Because subprime mortgages were bundled with prime mortgages, investors had no way of understanding the risks associated with the product. The housing bubble that had been building for years finally burst as the CDO market began to warm. As house prices fell, subprime borrowers began defaulting on loans worth more than the house, accelerating the fall in house prices.

Regulations on subprime loans and MBS products were too lax and poorly regulated. Many individual borrowers not only made loans so large that they would be difficult to repay but also overestimated the income of the borrowers and made exaggerated promises by investors about the safety of the MBS products used. There was also an increase in fraudulent activities, such as they were sold. Moreover, as the crisis escalated, many central banks and governments failed to fully appreciate the expansion of non-performing loans during boom times and the multifaceted nature of mortgage losses across the financial system. 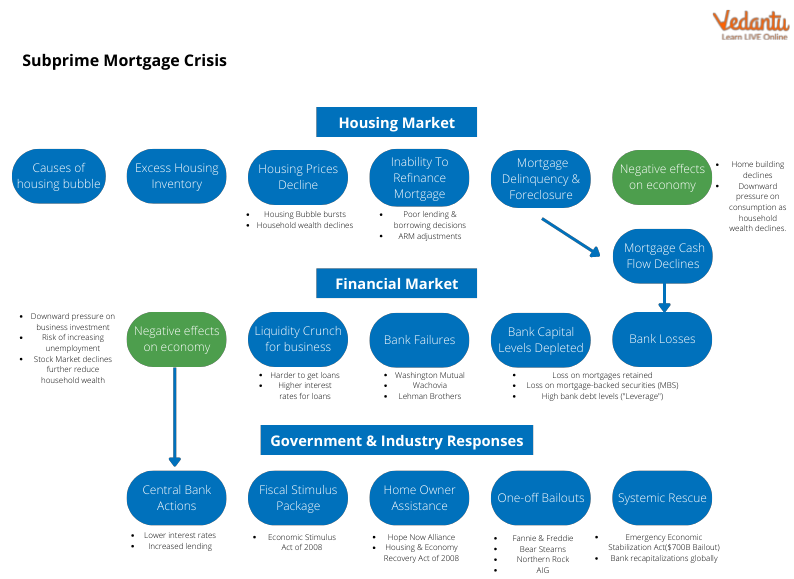 The policy responses by the central bank are discussed below in detail.

The global financial recession began in 2007 and hit nearly every country. If its consequences and growth are projected, its adverse and destructive effects. The impact on global and national economies could be partially neutralised. The financial crisis, like all crises, the 2007 recession had its own conditions and indicators that revealed global imbalances. The economy and state of the US financial system, a global rating agency and leader Economic analysts did not pay attention to or believe in the immortality and robustness of the United States.

The 2007-2008 financial crisis, also known as the subprime mortgage crisis, was a severe liquidity crisis in global financial markets that occurred in the United States as a result of the collapse of the US housing market. It has led to the collapse (or near collapse) of several large investments and commercial banks, mortgage lenders, insurance companies, savings and credit unions, causing the Great Recession. The financial crisis, like all crises, The 2007 recession, had its own conditions and indicators that revealed global imbalances. The economy and state of the US financial system, a global rating agency and leading Economic analysts did not pay attention to or believe in the immortality and robustness of the United States.

FAQs on Global Financial Crisis of 2008

1. What do you mean by Recession?

A recession is considered when a country's economy faces negative gross domestic product (GDP) growth, rising unemployment, falling retail sales, and declining incomes and manufacturing activity for an extended period of time. Recessions are an inevitable part of the business cycle or the predictable pace of expansion and contraction of a country's economy. During a recession, the economy weakens, people lose their jobs, business sales fall, and economic output across the country falls. The most common example of a recession is the global financial crisis of 2008.

2. State the difference between the Recession and Depression.

A recession is a deterioration in the economic cycle characterised by a decline in output and employment. It reduces household income and spending, resulting in many businesses and households delaying major investments and purchases.

A depression is characterised by a sharp decline in industrial production, widespread unemployment, a severe slowdown or halt to growth in construction, and a sharp slowdown in international trade and capital flows. One of the major differences between recession and depression is that, aside from the severity and impact of the two, a recession can be geographically limited, whereas depression is something that can happen in many countries.

The Financial Crisis of 2008, or the Global Financial Crisis, occurred at the beginning of the 21st century. It was the worst financial crisis that the world witnessed. Financial deregulation was a major contributor to the 2008 financial crisis, enabling speculation in cheap and wild mortgage-backed derivatives available even to those with questionable credit ratings. Rising real estate prices and easy mortgages have led many people to take out mortgages. This caused the real estate bubble. When the Fed raised interest rates in 2004, the resulting increase in mortgage payments put pressure on borrowers' ability to pay.