Often, we do not have an adequate amount of study material or notes to study from. When it is an important subject like Geography, we cannot afford to take the risk of studying with limited material as it won’t help in the exam. This is why Vedantu offers Social Science Geography revision notes for Class 9 students. If you are in Class 9 and want to study the physical Features of India, you must download CBSE revision notes for Class 9 Geography Chapter 2 Physical Features of India. It will provide you with all the requisite information about Chapter 2 which is about all the physical features of India. 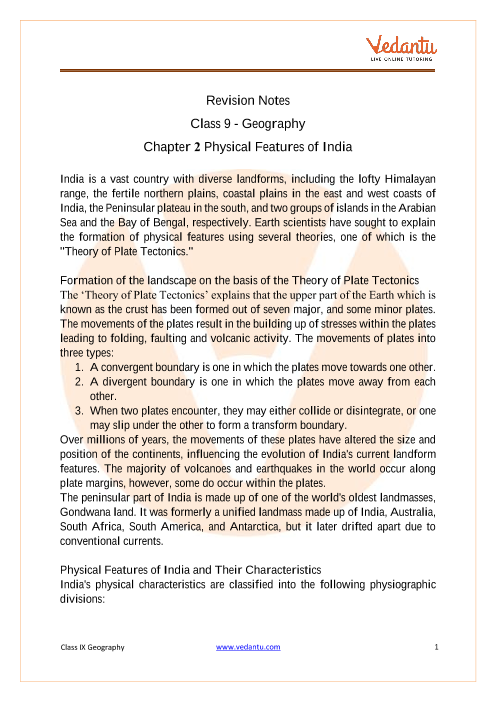 The Important Physiographic Division of India

These are the most important physiographic division that you must learn in Class 9 Geography Chapter 2 notes. The Physical Features of India Class 9 notes will inform you about this physical division in details.

Things to Learn About the Himalayan Mountains

Himalayan Mountains are stretched over the northern borders of India. From the Indus to the Brahmaputra, these mountain ranges run in the west-east direction. Also, in its longitudinal extent, it has three parallel ranges which have been discussed in Geography Class 9 Chapter 2 notes.

The three parallel ranges are the Great or Inner Himalayas which is also known as Himadri, Himachal or Lesser Himalaya and Shiwaliks. Below are the detailed descriptions of these ranges that you might require for Physical Features of India project.

Himadri is the northernmost range. It has the loftiest peaks and is regarded as the most continuous mountain range. It has an average height of 6,000 metres. The folds of Himadri are asymmetrical and the core of this section of Himalayas is composed of granite.

To the south of Himadri is the most rugged mountain system which is regarded as the lesser Himalaya or Himachal. It is also important to know that the Pir Panjal range is regarded as the most important and longest range. Lastly, the outermost Himalayan range is known as Shiwaliks which are composed of unconsolidated sediments. The longitudinal valley that lies between Himachal and Shiwaliks are known as Duns. The most popular Duns are Dehra Dun, Kotli Dun and Patli Dun.

The Himalayan bend sharply to the south beyond the Dihang gorge is known as Purvanchal that comprises Patkai hills, the Naga hills, the Manipur hills and the Mizo hills. All of these form an important part of the geographical features of India.

Lastly, with the help of The Physical Features of India Class 9 notes PDF, you will be able to understand the potential of these features in the future. For example, the mountains serve as the major source of water and forest wealth. On one hand, the northern plains are the granaries of the country, the plateaus are the storehouse of minerals and on the other hand, the coastal region provides for port activities and fishing. All of this information is highly essential not only to get good marks in exams but also increase knowledge about the geography of India.

1. Describe the Northern Plain and the Peninsular Plateau.

The interplay of 3 major rivers, the Indus, Ganga and Brahmaputra along with their tributaries has given birth to the northern plain. The northern plain spreads over 7 lakh sq. km. This plain is divided into Punjab plain, Ganga plain and Brahmaputra plain. Also, this region can be divided into 4 regions which are Bhabar, Terai, Bhangar and Kankar. In Geography Chapter 2 Class 9 Notes, you will also get to learn that the newer, younger deposits of the floodplains are called Khadar. It is a tableland composed of old crystalline, metamorphic and igneous rocks. This plateau was formed because of the drifting and breaking of Gondwanaland. The distinctive feature of this plateau is the Deccan trap which is the black soil area. The two important divisions of this plateau are the Central Highlands and The Deccan Plateau. The western and the eastern edges of the plateau are marked by the western and eastern Ghats respectively.

2. What are the Coastal Plains and the Islands of India?

This is a flat low-lying land that is next to the ocean. Two narrow pieces of land that are found in the east and the west of the peninsular plateau are known as Eastern Coastal Plain and Western Coastal Plain respectively. You can also avail this information by looking for physical features meaning in Hindi. An island is a sub-continental land surrounded by water. The group of islands are divided into two categories and are named the Andaman and the Nicobar Islands located in the north and south respectively. These islands lie close to the equator and you will understand them better if you make a Physical Features of India PPT on your own with the help of the Physical Features of India Notes.

3. How to study Chapter 2 of Class 9 Geography efficiently?

Many students find Geography as a dry and boring subject. Since it involves extensive reading, revision notes are a time-saving way to study Geography efficiently. Vedantu’s Class 9 Geography Chapter 2 Revision Notes are of great value to students for the following reasons -

The Vedantu revision notes can be downloaded free of cost from the vedantu website (vedantu.com).

5. What are the physical features of India?

Chapter 2 "Physical Features of India" explains the characteristics of the above-mentioned physical divisions of India. Each physiographic feature is explained in detail outlining the diverse geographical beauty of our nation. Students can use Vedantu’s Revision Notes for Class 9 Geography Chapter 2 for a better understanding of the chapter.