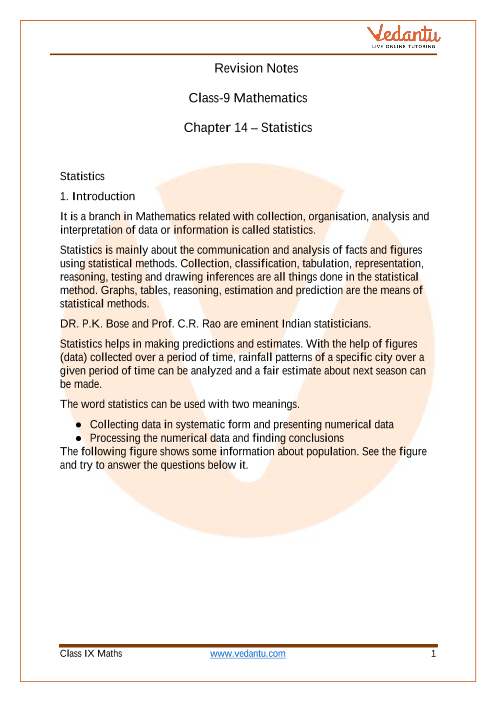 It is a branch in Mathematics related with collection, organisation, analysis and interpretation of data or information is called statistics.

Statistics helps in making predictions and estimates. With the help of figures (data) collected over a period of time, rainfall patterns of a specific city over a given period of time can be analyzed and a fair estimate about next season can be made.

The word statistics can be used with two meanings.

The following figure shows some information about population. See the figure and try to answer the questions below it.

What information about population does the figure represent?

We realize that the figure contains a variety of useful information that is easy to understand and analyze and this is what statistics helps us in.

Today, statistics has become a part of all branches of knowledge that we study or know. It is used to study problems in Biology, Psychology, Economics, Education, Sociology, Trade, Industry etc.

The statistical method of studying a problem mainly consists of the following steps:

The numerical expressions that represent the characteristic of a group (a large number of numerical data) are called measures of central tendency (or averages).

An average which is used to represent a whole series should not have either the lowest value or the highest value in the group but a value which is somewhere between the two extremities, preferably in the centre, where most of the items of the group cluster.

There are many types of statistical averages, for example mean, median and mode.

2. Numerical Data and Its Representation

A class consists of $64$ students. The teacher gives a test in English. The scores each student obtained out of $100$ are as follows:

These marks are the numerical data called raw data collected with the purpose of knowing attainment of the class in English.

The way in which the scores are presented hardly gives any idea about attainment of the class in English. It is necessary to present any such numerical data in a systematic manner so as to know some meaning of it.

There are different methods of presenting numerical data in systematic form.

In Table $2$ the same data is arranged in ascending order. Observe the table.

Information Gathered from the Table:

The minimum and maximum marks are $14$ and $73$ respectively. Some students have scored equal marks. The score $40$ has occurred five times, which is the maximum repetition.

Drawbacks of this Method:

Therefore to get more information, it becomes necessary to put it in a concentrated form.

The table $3$ given below is the ungrouped frequency distribution of the data of table $1$. The table is prepared as follows:

Start from the smallest number in the data and then write the numbers one below the other till the last. Now to track the repeated occurrence of numbers make a tally mark like this '|' next to that number. The fifth mark is drawn diagonally crossing the first four marks (||||in this way). This makes counting of tally marks easy. Make the sixth tally mark at a small distance from the first five. The total number of tallies or count corresponding to a number in the data is called the frequency of the number.

Such a frequency distribution table makes it very easy to observe and also the numerical data is more informative. Just by looking at the table it can be concluded that the number of students scoring marks between $44$ and $58$ is very large.

The table has a large span.

This drawback can be removed by creating a grouped frequency distribution table.

In this method, the numerical data is distributed into convenient groups or classes using tally marks.

The Important Points of this Table are:

Table $1$ shows marks of each student in a class. In terms of statistics, they are the scores of individuals of a group. This is the primary information collected. Such information is called Raw numerical data.

b. Range of the Data

In table $2$, the numbers are written in order which can be called as the data presented in order. Range of the data is defined as the difference between the largest and the smallest number of the data. The range of data in table $2$ is $73 - 14 = 59$.

Class interval is the range of that class.

e. Frequency of the Class

The number of tally marks or count corresponding to a class is called the frequency of the class.

The cumulative frequency less than the upper limit of a certain class is equal to the sum of the frequency of that particular class and the frequencies of all classes preceding it.

Table $5$ is a cumulative frequency table prepared from table $4$.

In this table, the column of cumulative frequency shows the number of scores more than the lower class limit of the corresponding class. Hence, such a table is called a cumulative-frequency-more-than table.

Numerical data can be represented in two forms:

There are two different forms of diagrammatic representation of numerical data.

Some graphical methods of representing numerical data are

A 2D representation in graphical form of a continuous frequency distribution is known as histogram, also a special type of bar diagram.

A histogram summarizes data pictorially and shows the distribution of the data. They are constructed from a frequency table that is a summary of the data. The general format for a histogram is a vertical scale which demonstrates frequencies and a horizontal scale which represents the individual intervals also known as classes. Bars are used to represent each individual interval where the height of the bar corresponds to the frequency.

A histogram is drawn by the steps given below.

A frequency distribution table is shown below.

From the above histogram the following points can be inferred.

A frequency polygon can be drawn by following the given steps.

By applying the method of point plotting, a frequency polygon can be drawn as follows:

Class-intervals on the x-axis and cumulative frequencies on the y-axis, the corresponding rectangles are drawn.

Draw a histogram and then join the midpoints of the rectangles by straight lines.

a. Arithmetic Mean for Ungrouped Data

The arithmetic mean of a set of raw data is the division of the sum of all the values of the variable given by the total number of values.

b. Direct Method for Arithmetic Mean of Ungrouped Data

Therefore the sum can be written as

Find the arithmetic mean for the given frequency distribution.

8.For Calculating the Mean Assumed Mean or Short-Cut Method

a. Short-Cut Method for Ungrouped Data

In this method, an assumed mean $\left( A \right)$ is taken from the scores, usually about the middle. If there are two middle scores, the one which has the higher frequency is taken as the assumed mean and then the arithmetic mean is obtained by using the formula.

b.  Shortcut Method for Grouped Data

In this method, an assumed mean $\left( A \right)$ is taken from the mid-values near about the middle of the table and then the Arithmetic Mean is obtained by using the following formula,

According to this method,

When the given statistical data is arranged in ascending or descending order of their values, then the value of the middle term is called the median.

Let '$n$' be the number of scores in ascending or descending order.

The number which appears the highest times in the given statistical data is called mode or it is the number whose frequency is maximum.

1. Why is NCERT Solutions for Chapter 14 of Class 9 Maths important?

The NCERT solutions for Chapter 14 of Class 9 Maths are an important study resource for a student of Class 9 because these are structured after some serious amount of planning and analysis of the previous year papers and the expected pattern of answers from the CBSE. Also, you will get the solution for all the problems even if you get stuck at some particular problem while solving. Secondly, NCERT solutions via Vedantu also offer PDF solutions available for free download, which will allow you to study from it later at your own convenient time.

2. What is the meaning of Statistics according to NCERT Solutions for Chapter 14 of Class 9 Maths?

Statistics is a branch of Mathematics that deals with a large number of given raw data and is associated with the collection, arrangement, tabulation, calculation, interpretation and finally the analysis of that data. These processes are carried out by certain statistical tools and methods which are pre-developed and help the users conduct their analysis in an easy manner. In Class 9, you will be introduced to this concept and you must concentrate on it properly to be able to solve the problems accurately.

When it comes to statistics, you will definitely come across the term called raw data or raw numerical data. This is basically the original or primary data that is collected by the researcher.  Raw data is unarranged scores of a group or an individual. Raw data are then needed to be arranged and interpreted for carrying out the particular analysis and present a conclusion that’s easily understood by the general population. You can refer to the Vedantu app or website for more information on Chapter 14 of Class 9 Maths.

4. What is the class boundary according to Chapter 14 of Class 9 Maths?

In Statistics, when you have a set of data, you also have lower limits and upper limits to the class from that data set. Now these upper and lower limits are nothing but the two ends of an entire set of scores or values given for analysis. The average is calculated for these two limits then what you will get is the class boundary. This is an important aspect of statistical analysis which helps you in conducting your interpretation and drawing results.

5. What is the range of data according to Chapter 14 of Class 9 Maths?

When you study the Statistics chapter from Vedantu you will get to know about the range of the data. This data is nothing but the scores and values that are primarily collected for interpretation. Now, this data is not endless. They have a starting and ending point. When you are given raw data, you need to first arrange that data properly and then you will notice the two extreme limits of that data set. The entire data that is present between these limits is called the range of data in statistics.