Air is the standard term for a mixture of gasses that constitute the Earth’s atmosphere. The gas is chiefly nitrogen, mixed with argon, water vapour, oxygen, trace gases, and carbon dioxide. Air contributes to a significant factor for the survival of living creatures. In this chapter, students will learn the significance of air and how it is essential for our survival. Students can refer to the Class 7 Geography Chapter 4 Notes to understand elaborate explanations on the structure of the atmosphere, composition of the atmosphere, and climate, weather, and so on. 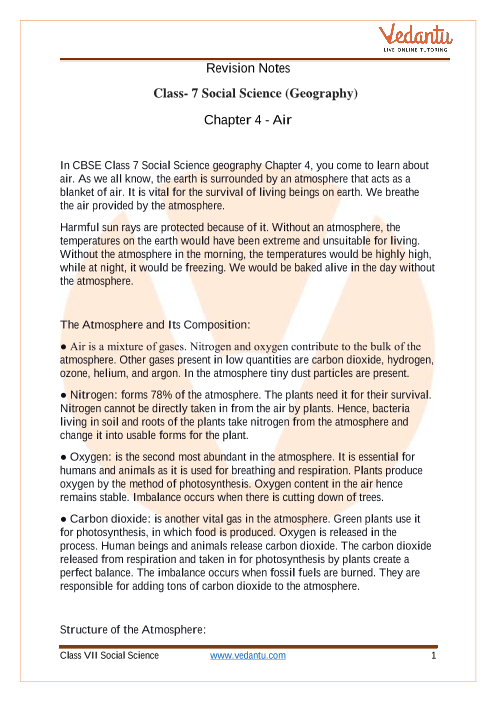 Composition of the Atmosphere

The atmosphere consists of different mixtures of gases. Out of these gases, oxygen, and nitrogen contribute in the majority to the atmosphere. Helium, carbon dial ode, ozone, hydrogen, and argon, on the other hand, are gasses doing in minimal quantities. Along with these gases, air also consists of tiny dust particles. Nitrogen is found in abundance in the air. We often inhale a certain amount of nitrogen into the lungs, thereby exhaling it. Nitrogen is a crucial factor for the survival of plants. In this chapter, students will learn more about how nitrogen helps plants and living creatures as a whole survive.

Plants cannot necessarily inhale nitrogen through the air directly. The bacteria that survive on roots and soil on plants, thus supply nitrogen from the air to these plants. Oxygen, on the other hand, is the second most abundant gas in the atmosphere. Students will learn more about all the gases that constitute the atmosphere. Maximal importance is given to nitrogen and oxygen.

Structure of the Atmosphere

The atmosphere is primarily categorized into five distinguishing layers, starting from the surface of the earth. These include- Troposphere, stratosphere, mesosphere, thermosphere, and exosphere. Students will learn in-depth about each of these layers. Students can refer to the Class 7 Geography Chapter 4 Notes to prepare well on this topic. The structure of the atmosphere is one of the most major topics of this chapter.

The troposphere is defined as the most significant layers of the atmosphere. The average height of this layer is about 13km. The air that humans and other living creatures breathe in exists in this layer. This layer also encounters all-weather phenomena like fog, rainfall, and hailstorm.

The stratosphere exists above the troposphere. The layer expands up to 50 km in height. This layer is independent of the clouds and its emerging weather phenomenon. This is why the layer is suitable for flying aeroplanes. The layer comprises a complete layer of ozone gas.

The mesosphere is defined as the third layer in the atmosphere. It exists right above the stratosphere. It expands up to 80 Kms in height. The meteorites that enter from space burn in this layer.

The thermosphere is the fourth layer of the atmosphere. This layer consists of a rapidly increasing temperature directly proportional to height. The ionosphere is a prominent part of the thermosphere.

The exosphere is the last and the uppermost layer in the atmosphere. This layer comprises drastically thin air. Light gases such as hydrogen and helium float in space through this layer.

The last section of this chapter deals with weather and climate. Under this section, you will learn about 4 core topics- temperature, air pressure, wind, and moisture.

The temperature that absorbs every day is the same as the atmosphere. The degree of coldness or hotness of the air is defined as temperature. The temperature generally alters between the night and the day, and even between seasons. Summers are usually much hotter than winters. In this section, students will learn more about temperature and how it plays a crucial role in the atmosphere.

Air pressure is known as the force exerted by air’s weight on the surface of the earth. As we go above the layers of our atmosphere, the pressure intensely falls. The air pressure is said to be highest at the sea level. Simultaneously, it lowers with height. Learn more about air pressure, how it operates, and how the temperature itself influences it in this section of the chapter.

The very motion of air from different high-pressure regions to low-pressure regions is defined as the wind. Winds are generally classified into three types. These are- permanent winds, seasonal winds, and local winds. Get deep insights into the three types of winds by referring to the class 7 geography chapter 4 notes.

The last section of the chapter tells us about the definition of moisture. When the water evaporates from different water bodies and land, it transforms into water vapour. The moisture present in the air is defined as humidity. When the air consists entirely of water vapour, it is known as a humid day. Learn more about moisture and how humidity comes into play when the air gets warmer.

1. What is the importance of rainfall?

Rainfall is essential due to several reasons. These include-

2. What are the different types of rainfall?

In brief, there are three types of rainfall. These include-

3. What is the importance of carbon dioxide?