The chapter Inside our Earth for the students of Class 7 Geography has a lot of interesting topics that can be used to understand the concept of the Earth’s interior. There are different points of interest such as Rocks found on earth, minerals, the interior of our earth, and so much more. It is really important for the students to have the facts regarding the planet’s interiors since these questions are most likely to appear in the examinations. Students can rely on the Class 7 Geography Chapter 2 notes to get the answers to every single question that they might have. 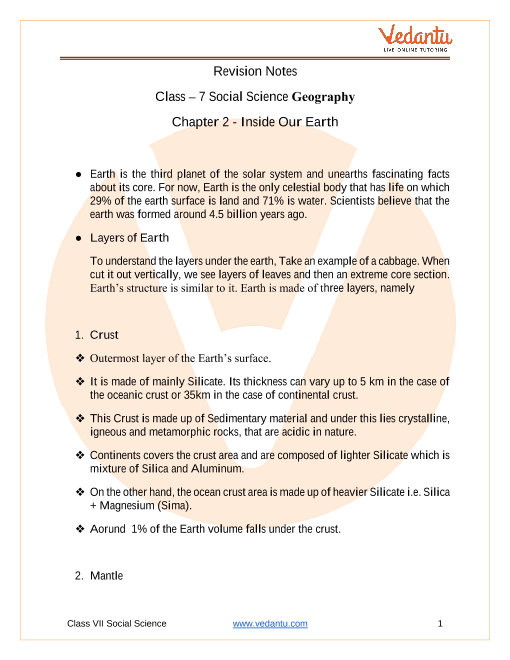 1. Earth is the third planet of the solar system and unearths fascinating facts about its core. For now, Earth is the only celestial body that has life on which 29% of the earth surface is land and 71% is water. Scientists believe that the earth was formed around 4.5 billion years ago.

To understand the layers under the earth. Take an example of a cabbage, when cut vertically, we see layers of leaves and then an extreme core section. Earth’s structure is similar to it.

Earth is made of three layers namely:

i. Outermost layer of the Earth’s surface.

iii. This Crust is made up of Sedimentary material and under this lies crystalline, igneous and metamorphic rocks, that are acidic in nature.

iv. Continents cover the crust area and are composed of lighter Silicate which is a mixture of Silica and Aluminum.

v. On the other hand, the ocean crust area is made up of heavier Silicate i.e. Silica + Magnesium (Sima).

vi. Around 1% of the Earth's volume falls under the crust.

i. Found beneath the Crust layer lies that runs for about 2900 km thick.

iii. Made up of silicate rich in Iron and Magnesium.

v. The high temperature allows the Silicate material to loosen up without changing its characteristics.

vi. The heat generated in the Mantle region causes the transfer of material in different directions that leads to landscape formation of the Earth. It also causes movement in tectonic plates which in turn causes volcanic eruptions, earthquakes, seabed movements and mountain formation.

i. Earth’s core is more like a furnace from where tremendous heat flows out and pressure which is known as geothermal gradient.

ii. The core is made up of Iron & Nickel.

iii. The core consists of two parts - The outer Core has a liquid portion which is quite malleable. The churning of this liquid portion creates and sustains the earth’s magnetic field. On the other hand, the Inner core is very hot and is a dense ball of Iron. The density and pressure inside this region prevent the iron from melting.

A rock is a mixture of several different minerals which are tightly held in a solid form. They occur naturally.

On the basis of their formation, they can be categorised into:

a. Igneous Rock: Formed by the solidification of lava or magma. Magma is obtained from the melted forms of rocks found in the mantle or crust. It is mainly of two types:

i. Intrusive or Plutonic Rock: Those rocks formed when the magma cools and crystallizes inside Earth’s Crust itself. Granite is an example of plutonic rocks.

ii. Extrusive or Volcanic Rock: In these, the magma comes out on the surface of the earth as a thick semi-solid form like lava and cools down. For example pumice or basalt rock.

b. Sedimentary Rock: These rocks are formed in water due to the accumulation and cementation of very small pieces of broken rocks, minerals, and organisms. Sandstones, limestone and shale are some of its examples. Several times sedimentary rocks contain fossils.

c. Metamorphic Rock: When either the sedimentary rocks or igneous rocks are subjected to high pressure and temperature conditions, their physical properties and chemical composition change. This phenomenon is known as metamorphism. Quartzite, marble etc. are examples of this.

Minerals are naturally occurring elements or compounds that have certain physical properties and definite chemical composition. Minerals are quite useful to us. They can be used in many ways like fuels (e.g, coal), natural gas and petroleum; in the industries in the form of iron, aluminium, gold, uranium to form other objects. They can also be used as fertilizers and as raw materials for minerals.

Overview of The Earth

Earth can be a very dynamic planet. There are so many changes that are constantly going on, both outside the earth and inside it. There are three different layers that constitute the interior of the Earth. These layers are known as the Crust, Mantle, and Core. Most rocks are situated in the Crust of the earth. Rocks can be classified into three major groups known as Igneous, Sedimentary, and Metamorphic. Most minerals tend to occur naturally and have some physical properties as well as definitely the composition of chemicals. Students need to have Inside our Earth Class 7 notes to completely understand these topics and score good marks.

A Look into The Earth’s Interior

There are various concentric layers that make up the Earth. These concentric layers are inside one another. The Crust is basically the layer that is uppermost and it is the thinnest one of all. The crust consists of 35km of landmasses and just 5 km of the floors of oceans. The constituents which make up most of the continental landmasses on the crust are alumina and silica. Hence, it is known as SiAl. Also, the minerals which make up the ocean masses are Magnesium and Silica. Hence, it is known as SiMa. You can find more details in the notes of Our Earth for class 2.

The layer which is situated beneath the Earth’s crust is known as Mantle. The depth of the entire layer of Mantle is about 2900 km right below the earth. The layer which is beneath the Mantle is known as the core and it is the innermost one. The total radius of the core is about 3500 km. Hence, it is definitely the largest one of the layers. The main materials found in the core are iron and nickel and it is known as NiFe. One of the most important things to know about the core is that it has a very high temperature and very high pressure. Students can find the details in the Class 7 Geography Chapter 2 notes.

A rock can be defined as any particular and natural mass consisting of mineral matter. Rocks are meant to cover up the earth’s crust. There are different sizes, colours, and textures of rocks.

The crust of the earth has a lot of different types of rocks that constitute the entire layer. We are going to classify these rocks into major groups.

These are the rocks that are formed after they fall down, hit one another, and crack to form smaller fragments. These fragments are known as sediments and these are transported properly and deposited at a certain location by water and wind. One of the examples of sedimentary rocks is Sandstone.

The Sedimentary and Igneous rocks, when subjected to great pressure and heat, often turn to metamorphic rock. Limestone changing to marble and clay changing to slate are a few examples.

The entire process through which the rocks go on changing from one form to another form can be known as the rock cycle. We hope that these Inside our Earth Class 7 notes are able to help you out properly in the examination.

1. What are the different layers of the Earth’s Interior?

The different layers of the Earth’s interior are known as the Crust, the Mantle, and the Core.

2. What is the radius of the Core of the Earth?

3. What are the different types of rocks found on the earth?

The different types of rocks are Igneous, Metamorphic, and Sedimentary.

There are three types of rocks. These are igneous rocks, sedimentary rocks and metamorphic rocks. Here are their respective definitions.

After a volcanic eruption, various components like dust particles, sediments are released into the environment. These components turn into different types of rocks. Igneous rocks are converted into sedimentary rocks. Sedimentary and igneous rocks are further converted into metamorphic rocks under high temperature and pressure. Metamorphic rocks change into sedimentary and igneous rocks due to wearing or melting. This process of conversion of rocks is known as the rock cycle.

7. Write the uses of rocks.

The uses of rocks are:

8. How to prepare Chapter 2 of Class 7 mentioned in the geography book?

To prepare Chapter 2 Inside Our Earth given in the Class 7 Geography book, follow the listed tips.