Verified
118.5k+ views
Hint: The biopsy of polar bodies is done as a form of preimplantation genetic screening (PGS). This screening test is useful in predicting the viability and pregnancy chance of the oocyte as well as the health of a person during pregnancy.

Complete answer:
Polar bodies are formed during oogenesis when the oocyte divides asymmetrically through the process of meiosis to form a large ovum and tiny polar bodies. During the first meiotic division of the primary oocyte, a large haploid secondary oocyte and the first polar body are produced. During the second meiotic division which takes place when the sperm enters the cytoplasm of the ovum, a haploid ovum and the second polar body are formed. The first polar body also divides, producing two polar bodies so in total there are three polar bodies formed from one ovum.

Additional Information: Let us look at the process of oogenesis.
-Oogenesis is the process of the formation of mature female gametes (ovum) from gamete mother cells (oogonia).
-The process of oogenesis starts during embryonic development when a couple of million oogonia are formed inside each fetal ovary.
-Oogonia starts dividing and gets temporarily arrested at the prophase-I of meiosis resulting in the formation of primary oocytes. These oocytes are covered by a layer of granulosa cells to form the primary follicle.
-Additional layers of granulosa cells result in the formation of secondary follicles. The secondary follicle develops further to produce a tertiary follicle which has a fluid-filled cavity known as antrum.
-The oocyte inside the tertiary follicles complete the first meiotic division to produce a secondary oocyte and now the follicle is known as a mature follicle or Graafian follicle.
-The secondary oocyte divides to form the ovum which is released from the Graafian follicle through the process of ovulation.
So, the correct option is ‘Oogenesis’.

Note: -The primary oocytes are arrested in the diplotene stage of prophase-I of the first meiotic division.
-Polar bodies are formed so as to divide the chromosome but they are tiny in size so that the maximum amount of cytoplasm is retained by the ovum so that it can nourish the developing embryo after fertilization.
-The remnant of the Graafian follicle form a structure known as corpus luteum which is responsible for maintaining the endometrial line of the uterus which is essential for pregnancy. 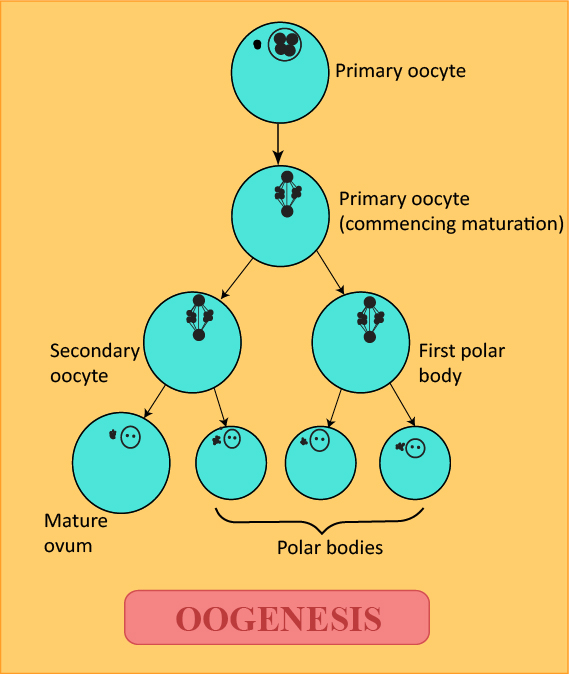