Throughout our history, mankind has always sought refuge in the divine. Even before we formed large groups and even larger kingdoms and empires; we have always looked to the unknowns for guidance. However, as we grew and our infrastructure developed, so did our quest in search of the divine. Various groups of people worshipped their own gods or goddesses. The NCERT Solution for Class 7 sst history Chapter 8 available at Vedantu will help students grasp the information from this chapter in a very short time and will also allow them to recall information if necessary. 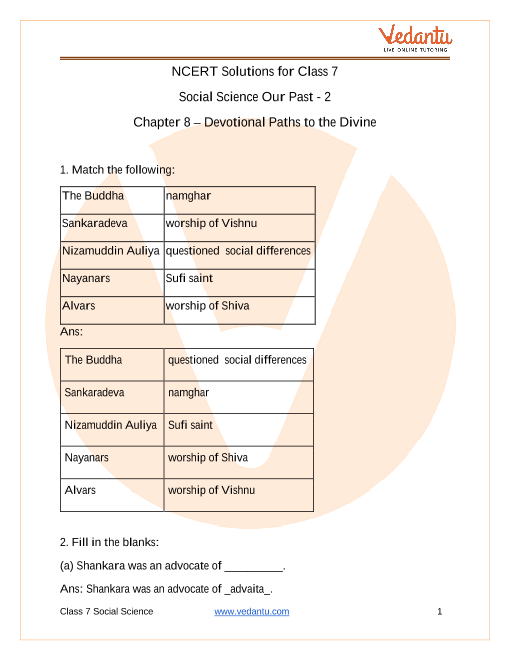 3. Describe the beliefs and practices of the Nathpanthis, Siddhas, and Yogis.

Ans: The Nathpanthis, Siddhas, and Yogis used straightforward, logical reasons to criticize the rituals and other elements of traditional religion and the social order. They believed that meditation on the formless Ultimate Reality was the way to salvation. They emphasized intensive mind-body training through yogasanas, breathing exercises, and meditation. These organizations grew especially popular among the "lower" classes.

4. What were the major ideas expressed by Kabir? How did he express these?

Ans: Kabir's teachings were founded on a total, if not outright rejection, of the main religious traditions. His lectures publicly mocked all kinds of outward worship in both Hinduism and Islam, as well as the priestly classes' dominance and the caste system. Kabir preached that the only way to redemption was via bhakti, or devotion, to a formless Supreme God.

Kabir's views were communicated through his poetry, which was a type of spoken Hindi that was widely understood by the general public. He also composed poems known as sakhis and dohas, which are still popular today.

5. What were the major beliefs and practices of the Sufis?

Ans: Following were the major practices and beliefs of the Sufis:

6. Why do you think many teachers rejected prevalent religious beliefs and practices?

Ans: Many teachers rejected prevalent religious beliefs and practices because these ideas favored social inequality and class division; they were burdensome and difficult to follow.  Hence, the teachers were drawn to the concept of a Supreme God who, if approached with devotion, might free humanity from slavery (or bhakti).

7. What were the major teachings of Baba Guru Nanak?

Ans: Following were the major teachings of Baba Guru Nanak:

8. For either the Virashaivas or the sants of Maharashtra, discuss their attitude towards caste.

9. Why do you think ordinary people preserved the memory of Mirabai?

Ans: Mirabai was completely devoted to Krishna and became a follower of Ravidas, a saint from a caste that is treated as "untouchable". Mirabai's memory has been perpetuated by ordinary people since her songs openly questioned upper-caste conventions.

The PDF will help answer important questions like those from the exercise given. A student’s ability to answer the questions will help determine their understanding of this chapter. You can download NCERT Solutions for Class 7 history for Chapter 8 for free and prepare for your exams without any hassle.

NCERT Solutions for Class 7 history devotional paths to the divine gives students another trove of information to learn from. Not only does this present the chapter in a different point of view, but also supplies answers to questions that will improve your understanding of our cultural heritage.

In many cases, our intense devotion for our gods has brought us together, and also torn us apart throughout history. In our search for the answers of the universe’s mysteries, our love and devotion to our gods and goddesses go undiminished; sustained by carrying on the tradition of prayer and rituals from one generation to the next.

The chapter specific to NCERT Solutions of Class 7 history Chapter 8 contains a few specific topics that will be summarized here:

The Idea of a Supreme God

In the early times of our history; even before thoughts of towns and cities could even be born, every group always looked for their way to explain the unexplainable. As we developed, we developed the concept of “nobility”, which meant not everyone was equal even at birth. As more people were subjected to this concept, they turned to the teachings of the Buddha and other deities. They longed for a supreme god; one who could free them of any bonds and grant them any wish they desired if they were simply approached with devotion or bhakti. The idea of bhakti gained popularity and has even been emulated by other religions.

The Change of Bhakthi in South India, Nayanars and Alvars

By the time Humans made it to the 9th century: They had two major sects of Hinduism made of people who came from all castes (even “untouchables”). The one thing the Alvars and Nayanars had in common was their devotion to their god (Vishnu and Shiva) respectively. However, while originally, these gods kept us apart; eventually, even our religious texts began to merge bhakti from various sources, creating the unified Hindu pantheon we see today.

The final goal of Bhakti was to purify one’s self through multiple lifetimes in order to attain a pure state that will allow one to become one with the Supreme God. It is believed that this is what will give the soul eternal salvation and leave them in a unified state of eternal bliss.

The history of Virashaivas, who strongly argued for the equality of women in a time when the Brahmanical laws suppressed them even in temples.

The Saints of Maharashtra

The saints of Maharashtra were, in fact, saint-poets who were often looked down upon because of their “untouchable” status. However, the beauty of their poems was conveyed through common Marathi. These poems spread the idea of a supreme god who lives within all and saw everyone equally without the concept of “Nobility” and “untouchability”.

Islam and Sufism have initially been unified. However, as Sufism promoted love, devotion, and compassion to all; Islam enforced strict religious laws that highlighted submission to the almighty. These Holy laws (Shariat) and Islamic theology slowly grew in popularity because of the highly personal relationship each member has with their god as well as a significant sense of community with one another.

Kabir was a saint who came from a Muslim family was one of the few saints who was loved by nearly every religious group that knew him. The beauty of his poems could move the hearts of Hindus and Muslims alike. His death was said to be a source of conflict because both Hindus and Muslims wanted to perform their sacred rites on his body. It is written that Kabir changed his body to flowers that could be equally distributed among both groups to perform their respective rites. Kabir always preached religious tolerance, and in fact, forbade mockery of other religions.

Guru Nanak was another religious figure who was loved by all groups and gained an enormous following of people simply by way of his words and poetry. Baba Guru Nanak preached the idea of equality regardless of caste, creed, or gender. He also always preached the importance of the right beliefs, honest living, helping others, and righteous worship.

This exercise is designed by experts to help you understand CBSE Class 7 Social Science History Chapter 8 solutions. It consists of the following:

Our experts designed the NCERT Solutions for Class 7th History Chapter 8 to help cover any issues students may suffer regarding this chapter. The key features of these solutions are as follows:

1. Was the religious belief ruled by the caste system?

2. Why was it so significant that the saints wrote in the common language?

Sanskrit was seen as a language of the “nobles” at this point, and great well-known poets only wrote their poems in this language which made it virtually inaccessible for most who did not have the benefit of learning Sanskrit. The saints who wrote in common languages like Marathi gave people poems that unified them under a single faith.

3. What were the major ideas expressed by Kabir?

Kabir was among the few saints who were praised by both Hindus and Muslims. His poems and ideas were expressed as a belief in the Supreme God by rejecting different types of religious traditions that were followed by people. Kabir chose the path of salvation as endless worship and devotion. The subject matter experts at Vedantu have established the solutions in a simplified manner on their official website (vedantu.com). These solutions are set by following the guidelines by the CBSE Board.

4. What were Class 7 teachings?

Kabir believed that all humans must worship a formless supreme god as different religions have different names. He taught the Muslim and Hindu community his poems that enlightened them to chose their path of salvation as devotion. Chapter 8 Class 7 Social Science is an interesting subject and teaches young minds about the formation of communities and devotion to God. For detailed information, you can download the vedantu app.

According to Kabir, as he tried to enlighten the people using his poems, there is only one formless supreme god where the different religions have given different names. He believed that the path to salvation must be worship and devotion. He spread this by teaching the Muslim and Hindu communities. Vedantu provides solutions to all the exercises in an easy manner to make studies effortless for students.

6. What were the basic principles Emphasised by the Nathpanthis Siddhas and yogis?

The Nathpanthis, Siddhas, and Yogis emphasized self-sacrifice by criticizing the traditions, rituals, or the cultures of the tradition by plain and reasoned arguments. They believed that the path to salvation is through devotion to one formless supreme god. The experts at Vedantu provide the students with a complete guide of revision notes, important questions, solutions to all the exercises, mock tests, etc. The students can access it anytime and download it for free.

7. What was the idea that Baba Guru Nanak preached?

Baba Guru Nanak believed that everyone must be treated with equality regardless of caste, race, creed, religion, or gender. He always preached the idea of following the right beliefs, helpful nature and their honest living. He believed in the importance of worshipping the righteous. The experts at Vedantu provide the students with a complete guide and solutions for Chapter 8 Class 7 Social Science free of cost.