Statement: In the ZnS (zinc blend) structure, the coordination number of each ion is 4.
State whether the given statement is true or false.

Verified
147.9k+ views
Hint: Zinc blend is also known as Sphalerite. It has a face-centered cubic structure. Each atom in the zinc blende or Sphalerite is surrounded by 4 atoms. ZnS also occurs in the Wurtzite form.

Complete step by step answer:
There are two common forms of ZnS. These are zinc blend, also known as Sphalerite and Wurtzite form.
Both of them have some common features:
i)- Both of them have a stoichiometry of 1:1 of Zn: S.
ii)- Each ion in both structures is surrounded by 4 atoms. They have coordination number 4.
iii)- Both of them have tetrahedral coordination.
The structure of the zinc blende (Sphalerite) is based on a face-centered cubic structure whereas the structure of Wurtzite is hexagonal cubic centered.
In both the structures there are 2 types of tetrahedral holes, in which half of them are occupied by the cations.
In both structures the bonding to the nearest neighbor atom is similar but with farther atoms the distance and bond angles are different.
There are 4 asymmetric units in zinc blende and 2 asymmetric units in Wurtzite.
Zinc blend has its own antitype i.e. both the cations and anions can switch their places and it does not affect the shape of the structure.
Hence it is a 4 coordinate ion and has a tetrahedral geometry.
The structure of the zinc blende is given below: 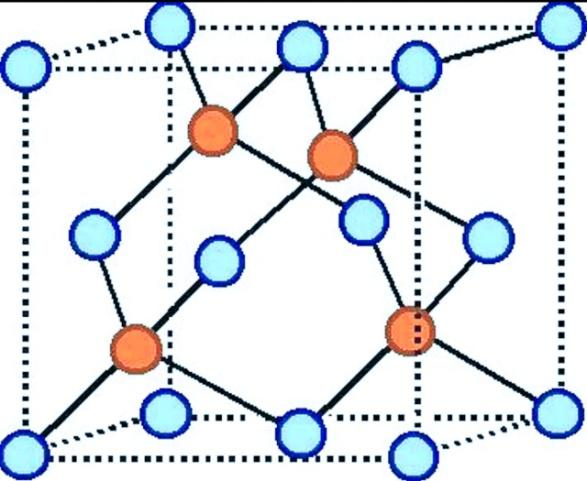 Hence, the statement ZnS (zinc blend) structure, the coordination number of each ion is 4 is true.