Verified
Hint: Electric dipole has equal charges, but of opposite sign, at both the ends separated by some distance. The force due to the electric field experienced by both the charges will be same in magnitude, but the direction will be opposite. As we know, an equal and opposite couple of forces generate torque and hence, the dipole will experience some torque acting on it while placed in an external electric field. We will calculate the value of this torque by calculating the magnitude of force generated by the electric field and using the relation between the force, torque and the distance of separation. 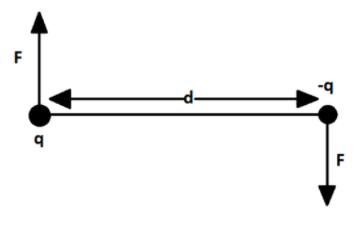