The solutions for the NCERT textbook for class 8th, Chapter 13 helps in increasing the understanding as well as the conceptual knowledge of the story, “ Anyay ke khilaf”. These solutions will help in providing a complete overview of the story as well as help in understanding what the writer wants to express. The importance of knowing and acknowledging what the writer has expressed using the story is very important.

The NCERT Solutions can help a student in preparing for any such questions which would involve a deeper understanding of the whole topic rather than what is simply mentioned. This can also lead to finding new links and can prove beneficial in the long run as it helps prepare for the future. As a language-based subject, a student can easily score good marks in this particular subject and thus obtain a better overall grade. NCERT textbooks on a whole can prove factorial positive in the long run, especially for students who seek to write for competitive exams. 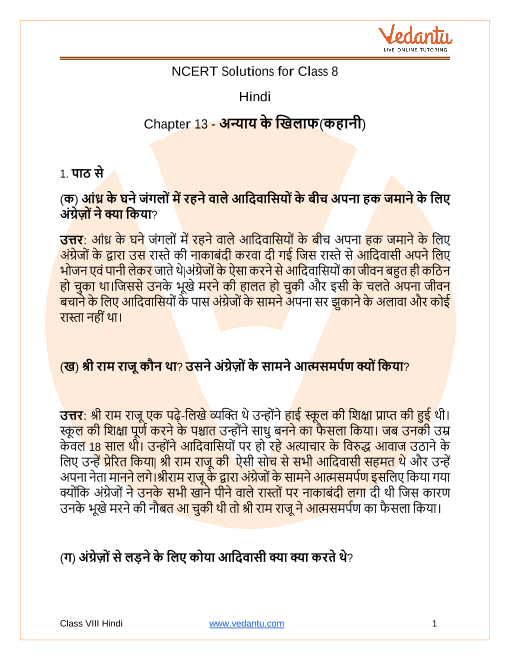 The PDF downloadable version of the solutions to the NCERT Hindi Textbook ’Durva’, provides ease, for every time a student does not need to go online to search for the solutions. This also helps in maintaining a constant flow of studies as the student will have every topic, handy and thus better performance during the examinations. The textbook solutions also provide a more holistic overview and solutions to all the questions mentioned in the textbook itself.

As per the guidelines of CBSE, each chapter in the textbook is important and so in order to better understand, a student can easily download the PDF version and use it as per their needs.

The story, “Anyay ke khilaf”, is set during the British era and revolves around the struggles of a tribe ‘Koya’ and a learned monk ‘Raju’. The story talks about the person Shree Ram Raju who completes his high school but looking at all the corruption that surrounds him, he decided to turn into a monk and live in the jungles. He was very lucky to find companions in the form of the tribal people. They would lead a war against the British army together.

The Britishers were to get a road built and forced the villagers and the tribal people to do their work for them. Having to refuse, the Britishers called on their army which led to a war between the Koya tribe and the Britishers. This was led by Raju, who encouraged the tribals to be one with the forest and rather use it to their advantage. They would attack the army by hiding in the small lanes that would and when the army would march by those lanes, the tribal people would attack them.

They would also loot the army and police station of their weapons. This led to a crucial fight between the Britishers and the Koya tribe. The story ends on a sorry note where Raju the protagonist of the story is killed by the British Army leaving the tribe to disarray.

The chapter does not have a particular weightage assigned to it but as a story based chapter, students can expect long 4 marks descriptive questions or 2 marks small answer based questions. For students to excel it is important that they go through every question and understand the story rather than simply mugging up the answers.

1. What Were the Ways in Which Koya Tribals Used to Fight the Britishers?

The Koya tribal people would hide in the forests, mostly around the narrow footpaths. They would use the forest as a resource to fight the Britishers and even if the British army would pass by those particular trials or small pathways, they would let the Indian army men out of them and kill him as soon as the English sergeant or captain was coming. They even attacked the police stations, army posts, looted them and fled.

2. Even After Studying Till High School, Why Would Raju Come Down to Live in a Jungle?

He has been very unhappy and his mind was upset with all the corruption spreading around the world, so this led to him becoming a monk. This must have made him drift away from society. It was also the time that he got into a rebellion against the British. This led him to come down and live in the forest, though luckily he found companions in there.