Reason for inclusion of NCERT Solutions for Class 10 Science chapter 5 is to help students understand the classification of different elements in the periodic table. The classification varies on the basis of characteristics, which is whether elements on this table are metal or a non-metal. This chapter has been divided into various segments ranging from Dobereiner's table, Mendeleev's table and their advantages as well as limitations.

With various activities, this chapter aims to help students to enhance their process of learning by making it interesting. The student is also provided with the illustration of three types of the periodic table that make explanation of the topic a lot simpler. 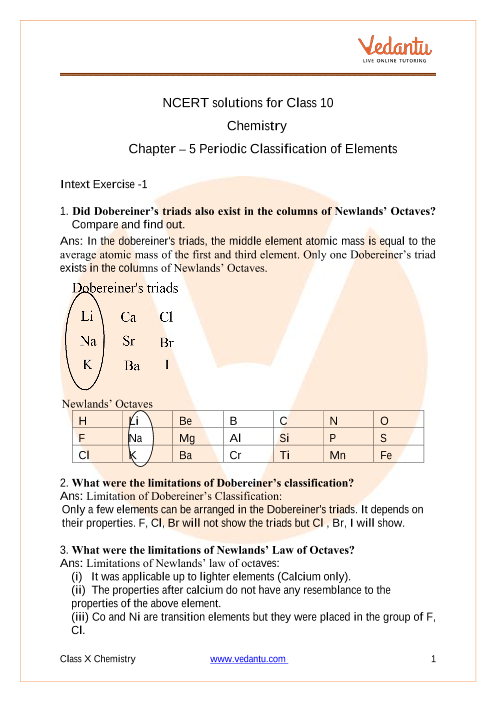 1. Did Dobereiner’s Triads Also Exist in the Columns of Newlands’ Octaves? Compare and Find Out.

Ans: In the dobereiner's triads, the middle element atomic mass is equal to the average atomic mass of the first and third element. Only one Dobereiner’s triad exists in the columns of Newlands’ Octaves.

2. What Were the Limitations of Dobereiner’s Classification?

Only a few elements can be arranged in the Dobereiner's triads. It depends on their properties. F, Cl, Br will not show the triads but Cl , Br, I will show.

3. What Were the Limitations of Newlands’ Law of Octaves?

(i)  It was applicable up to lighter elements (Calcium only).

(iii) Co and Ni are transition elements but they were placed in the group of F, Cl.

(iv) Iron properties are similar to the cobalt and nickel but placed in different columns.

1. Use Mendeleev’s Periodic Table To Predict the Formula for the Oxides of the Following Elements: K, C, Al, Si, Ba.

2. Besides Gallium, Which Other Elements Have Since Been Discovered That Were Left by Mendeleev in His Periodic Table? (Any Two)

3. What Were the Criteria Used by Mendeleev in Creating His Periodic Table?

a) Lithium, Sodium, Potassium Are All Metals That React With Water To Liberate Hydrogen Gas. Is There Any Similarity in the Atoms of These Elements?

Ans: Yes, all the three elements lithium, sodium, and potassium have one electron in the valence shells.

b) Helium is an Unreactive Gas and Neon is a Gas of Extremely Low Reactivity. What, if Anything, Do Their Atoms Have in Common?

Ans: Helium (He) and neon (Ne) are inert gas. Their outermost shells are completely filled. Helium has a duplet in its K shell, while neon has an octet in its K, L shell.

5. In the Modern Periodic Table, Which are the Metals Among the First Ten Elements?

Ans: Lithium (Li) and beryllium (Be) are metals among the first ten elements.

6. By Considering Their Position in the Periodic Table, Which One of the Following Elements Would You Expect To Have Maximum Metallic Characteristic? Ga, GE, As, Se and Be.

Ans: Be and Ga are expected to be more metallic but Metallic character increases when we go from top to bottom. Due to its larger size for gallium, it is the most metallic among the given elements.

1. Which of the following statements is not a correct statement about the trends when going from left to right across the periods of the periodic Table?

(In this period, the atom's size decreases so it is difficult to lose their electrons.)

2. Element X forms a Chloride with the Formula $XC{{l}_{2}}$ , Which is a Solid with a High Melting Point. X would most likely be in the same group of the Periodic Table as

Ans: Valency of X in the given compound is 2. Mg is in the group 2 in the periodic table.

a) Two shells, both of which are completely filled with electrons?

Ans: Neon has two shells, both of which are completely filled with Electrons

c) A Total of Three Shells, With Four Electrons in its Valence Shell?

Ans: Silicon has three shells, with four electrons in its valence shell

d) A total of two shells, with three electrons in its valence shell?

Ans: Boron has two shells, with three electrons in its valence shell

e) Twice as many electrons in its second shell as in its first shell?

Ans: Carbon has twice as many electrons in its second shell as in its first shell.

a) What property do all elements in the same column of the Periodic Table as boron have in common?

Ans: All the elements have the same number of valence electrons and the valency is equal to 3.

b) What property do all elements in the same column of the Periodic Table as fluorine have in common?

Ans: All the elements have the same number of valence electrons and they all have valency equal to 1.

a) What is the atomic number of this element?

Ans: Atomic number of the given configuration is 17.

b) To which of the following elements would it be chemically similar? (Atomic numbers are given in parentheses.)

6. The Position of Three Elements A, B and C in the Periodic Table are Shown Below

a) State whether A is a metal or nonmetal.

b) State whether C is more reactive or less reactive than A.

Ans: C is less reactive than A. Reactivity decreases down the group in halogens.

c) Will C be larger or smaller in size than B?

Ans: When we move from left to right, the atomic size decreases so C is smaller than B.

d) Which type of ion, cation or anion, will be formed by element A?

Ans: A is in group 17 so the valence electrons will be 7. It would form an anion and accept an electron to complete the octet.

7. Nitrogen (atomic number 7) and Phosphorus (atomic number 15) Belong to Group 15 of the Periodic Table. Write the Electronic Configuration of These Two Elements. Which of These Will Be More Electronegative? Why?

Ans: The electronic configuration of the group 15 elements.

8. How Does the Electronic Configuration of an Atom Relate to its Position in the Modern Periodic Table?

9. In the Modern Periodic Table, Calcium (Atomic Number 20) is Surrounded by Elements With Atomic Numbers 12, 19, 21, and 38. Which of These Have Physical and Chemical Properties Resembling Calcium?

Elements with atomic number 12 and 38 have the same chemical properties as that of calcium. Because both of them have the same number of valence electrons.

Students who are looking for NCERT Solutions for Class 10 Science Chapter 5 - Periodic Classification of Elements PDF can opt for Upcoming Exams and also You can Find the Solutions of All the Science Chapters below.

By referring to the 5 Science class 10 solutions available for NCERT, the students are able to avail a simpler procedure of learning. It consists of various to the point question and answers, followed by proper explanations of different subtopics. This solution is what students can avail when they are trying to comprehend the basic concept behind this chapter.

This primary knowledge will prove to be useful when a student moves on towards later years of their education. To understand chemistry as a subject, having a clear concept about elements on the periodic table is necessary.

In this segment of chapter 5 science Class 10, students will learn how elements were classified in the periodic table based on their properties. These elements were segregated from one another on the basis of whether they were gases, metals or non-metals.

A German chemist, known to all as Johann Wolfgang Dobereiner, had attempted to group elements based on their properties. Formation of these groups was known as triads.

In this section of the periodic classification of elements in Class 10 solutions, learn about how in this table, every eighth element displays properties that are similar to the first one. This law may appear in the examination so students will need to memorise it thoroughly.

In this section of the periodic classification of elements of class 10 NCERT solutions, an introduction to Mendeleev's periodic table has been provided. In this table, elements were arranged, based on their increasing atomic masses.

This periodic table present in Class 10 Science Chapter 5 NCERT solutions was able to predict the existence of certain elements that back then had not been discovered back then. These elements include Germanium (Ge), Gallium (Ga) and Scandium (Sc).

In this periodic table present in Ch 5 Science Class 10 NCERT solutions, there is no explanation found about Isotopes. Hydrogen in this table does not have a fixed position, and Mendeleev also fails to provide any explanation regarding the atomic masses being in the wrong order for some elements.

Elements present in this table of Class 10 Periodic Classification of Elements solutions have been arranged on the basis of their increasing atomic masses. Students will need to learn the order of the elements in this periodic table for their examinations.

This modern periodic table that we find in Class 10 Science Ch 5 solutions, consists of 7 periods and 18 groups. Elements in a period are set on the basis of the maximum number of electrons present.

There are different trends in the modern periodic table that have been noticed, which students will learn about in this section. Electronegativity, electron affinity, metallic character, atomic radius, etc. are some of the many trends.

With the help of NCERT solutions for Class 10 Science Chapter 5 Periodic Classification of Elements from Vedantu, score well in examinations.

1. What is there in for NCERT solutions for Class 10 Science chapter 5?

This chapter, Periodic Classification of Elements, includes exercises that talks about three different periodic tables. We first are informed about classification of elements in terms of their properties in the beginning. It then moves on to explain to students exactly what the Dobereiner's triad is and the concept behind it.

Students also learn about the Newland's Law of Octaves that later was removed and Mendeleev's periodic table was introduced. This chapter finally proceeds to explain the modern periodic table and the classification of the elements present on it.

2. What are the new topics to be learnt in chapter 5 class 10 Science?

The new topics to be learnt in Chapter 5 of NCERT Solutions for Class 10 Science are:

As a practical subject, you must have a clear concept about elements on the periodic table to understand chemistry.

3. Why should I refer to the NCERT Solutions for Class 10 Science Chapter 5?

Students can benefit from a simplified learning method by referring to the Science Chapter 5 of Class 10 answers available on the Vedantu website and on the Vedantu app at free of cost. Vedantu offers NCERT Solutions for Class 10 Science Chapter 5. It is made up of a series of short, to-the-point questions and answers, followed by thorough explanations of numerous subtopics. These are the high-quality solutions written by subject matter experts that students can refer to if they are having trouble grasping the core concept of this chapter.

4. What concepts can I learn using the NCERT Solutions for Class 10?

The inclusion of NCERT Solutions for Class 10 Science Chapter 5 aims to aid students in understanding the periodic table's classification of different elements. The categorization is based on features, such as whether or not the components in this table are metal or nonmetal. This chapter is separated into sections that cover everything from Dobereiner's Table through Mendeleev's Table, as well as its benefits and drawbacks. You can refer to Vedantu’s NCERT Solutions for Class 10 Science Chapter 5 to understand the concepts. These solutions will not only help students with board exams but also in various competitive exams.

Students will study how elements were categorised in the periodic table based on their characteristics in this part of Chapter 5 Science Class 10. Depending on whether they were gases, metals, or non-metals, these elements were separated from one another.

An introduction to Mendeleev's periodic table is offered in this portion of the periodic classification of elements of Class 10 NCERT answers. The elements were ordered in this table according to their increasing atomic masses. This is an important topic and questions might come from this portion in your exams. Download Vedantu’s NCERT Solutions for Class 10 Science Chapter 5 free of cost to learn the chapter better and score high marks in exams.