Write true or false and justify your answer in each of the following:
If a number of circles touch a given line segment PQ at a point A, then their centers lie on the perpendicular bisector of PQ.
(A) True
(B) False
(C) Ambiguous
(D) Data insufficient

Verified
129k+ views
Hint: To solve this question, we will draw a line and we will draw a number of circles touching that line. After doing this, we will find the focus of the centers of all these circles and then we will answer according to the options given in question

Complete step-by-step answer:
Now, in the question, it is given that a number of circles touch the given line segment at a point. So, we will draw the figure as the information given in question: 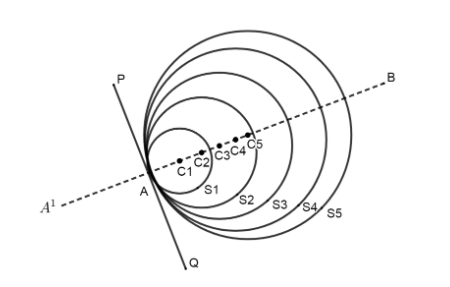 Note: Here, while solving the question, we have considered that the circles lie in the second plane (x-y plane). Even if there is a circle in a third plane (x-y-z plane) and it is touching a given line segment at point A, its center will be on the perpendicular bisector of PQ. Another thing to note is that the radius of the circle has no role in it. Any circle of real radius will satisfy the condition.