What type of stoichiometric defect is shown by AgCl?

Verified
145.8k+ views
Hint: AgCl is a chemical compound known as silver chloride. It is very less soluble in water. Each silver ion in the lattice’s interior binds with six chloride ions, and each chloride ion in the interior binds with six silver ions. Those ions on the lattice’s surface or edges bind to fewer than six ions and carry a partial charge.

Complete step by step answer:
-The two types of defects in any lattice structure are: Schottky defect and Frenkel defect. Schottky defect arises when equal numbers of cations and anions are missing from the lattice. It is a common defect in ionic compounds with high coordination numbers where both cations and anions are of the same size. Due to this, the density of the crystal decreases and it starts to conduct electricity to a smaller extent.
-On the other hand, Frenkel defect arises when some of the ions of the lattice occupy interstitial sites leaving the previous spaces vacant. This defect is found in ionic compounds in which the anion is much larger than the cation in size. The density of the compound does not change due to this defect and the overall composition remains the same.
-In AgCl, as the anion is much larger than the cation, it shows Frenkel defect. The silver ions are much smaller than the chloride ions. So, the silver ions occupy the interstitial sites, leaving a corresponding number of normal lattice sites vacant. 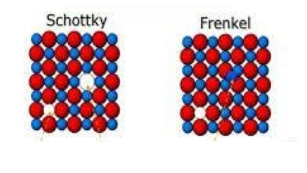