The Ti plasmid is often used for making transgenic plants. This plasmid is found in
A. Rhizobium of the roots of leguminous plants
B. Agrobacterium
C. Yeast as a 2 µm plasmid
D. Azotobacter

Verified
177k+ views
Hint: Ti plasmid is a member of a community of plasmids from several types of Alphaproteobacteria. Representatives of this plasmid family are defined by the presence of a preserved DNA region known as the repABC gene cassette, which facilitates the proliferation of the plasmid, the differentiation of the plasmid into the daughter cells during cell division, and also the preservation of the plasmid at small copy numbers in the cell.

Complete answer: Agrobacterium is a phytopathogenic type of bacteria able to pass fragments of its genome to plant cells. Tumour inducing (Ti) is a plasmid identified in Agrobacterium species. The portion, called "T-DNA," is situated on a large plasmid (Ti plasmid) in the microorganism. Upon transfer to the plant, T-DNA is firmly incorporated into the genome of the plant and therefore genetically converts its target cell. T-DNA could be designed to hold virtually any sequence without compromising the potential of the bacteria to manipulate its host. As a consequence, Agrobacterium was embraced as the chosen mode for the development of transgenic plants with unique traits of agronomic and scientific significance. 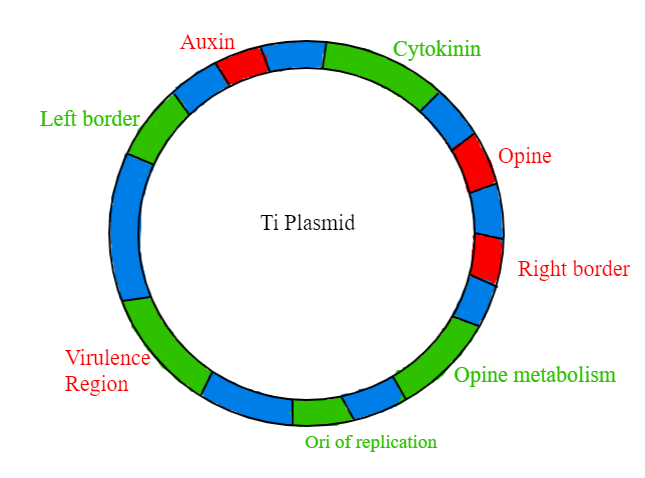 Hence, the correct option is (B).

Note: Agrobacterium tumefaciens is a gram-negative bacteria capable of infecting crops by delivering a specific segment of its genome to the nucleus of resistant plant cells. Greater knowledge of this mechanism will encourage the creation of better equipment for the production of genetically modified plants and thereby enhance our understanding of core cell functions and host-pathogen associations.
Recently Updated Pages
If ab and c are unit vectors then left ab2 right+bc2+ca2 class 12 maths JEE_Main