The larva of ‘tongue worm’ is known as
A. Veliger
B. Tornaria
C. Echinopluteus
D. None of the above

Verified
129.6k+ views
Hint: The Hemichordata Balanoglossus sp. is known as tongue worm. Tornaria larva is of some hemichordata species.

Complete answer: Balanoglossus sp. is a Hemichordate species. It belongs to the class Enteropneusta of the phylum Hemichordata.
Being a Hemichordate, it links between non-chordata and chordate animals. Because of this reason it has an important evolutionary significance. It is a burrowing animal and exclusively marine. These ocean-dwellers are also called acorn worms. In Hemichordates, their body is divisible into proboscis, collar, and trunk- this is the basic unique characteristic feature. Head and tail are absent in Balanoglossus.
The proboscis of this animal protrudes outside and appears like a tongue. This is the reason they are called ‘tongue worms’. The young swimming juveniles produced by them are called Tornaria larva. It is a planktonic larva. Tornaria appears very similar to the bipinnaria larvae of some Echinoderms (Starfishes). They have convoluted ciliary bands running around the body.
Tornaria larva was first described by Muller, in 1850. It possesses an oval and transparent body. It measures up to 3 mm in size. At the anterior end of its body, a tuft of cilia and a pair of eye spots are present. Its digestive system is differentiated into oesophagus, stomach and intestine. 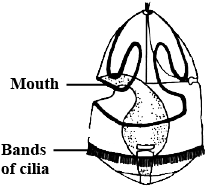 So, the correct answer is B. Tornaria.