The geologists of Darwin’s time were revising previous estimates of Earth’s age. Some suggested that Earth may be millions of years old, whereas previous assumptions were that it was only thousands of years old. Why was an older estimate of Earth’s age important to Darwin’s theory?
(a) Darwin observed evidence of migrations between continents, which would take long periods of time to complete.
(b) Darwin proposed natural selection as a slow and gradual process.
(c) DNA mutations are rare occurrences.
(d) Extinctions are rare events, but there is evidence of many extinct organisms.

Complete answer:Charles Lyell, a Scottish Geologist presented the idea that some natural processes which are still operating with the same intensity had shaped Earth.

James Hutton also contributed to this idea and proposed that the environment changes over time and individuals adapt to the changes accordingly. Both of them supported that the age of Earth is millions or billions of years old.
The processes that lead to changes in the organisms can be used to determine Earth’s age.
Also, the same processes cannot be completed within a few thousand years.

The organisms which are better adapted to such changes or natural processes survive, reproduce and the changes in them become heritable.
This idea is referred to as ‘natural selection’ by Charles Darwin.
He also concluded that natural selection is a slow and gradual process which brings variation in organisms and contributes to formation of new species, i.e. speciation. Natural selection is the most important concept of Darwinism.

So, the correct answer is ‘Darwin proposed natural selection as a slow and gradual process’.

Note:Charles Lyell and James Hutton were not really evolutionists.
They were Geologists who contributed their ideas to forward the fact that the Earth was much older. They opposed the belief of the scientific community that Earth was just a few thousand years old. 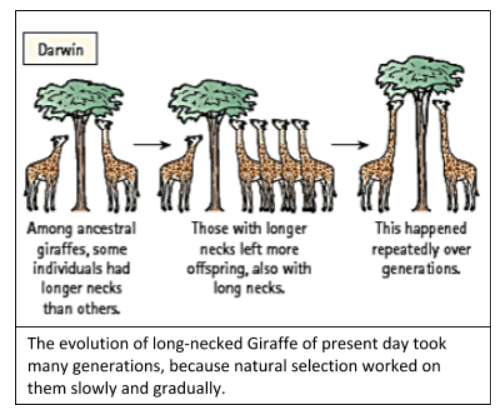