Verified
Hint: Silicate is actually a member of anions consisting of silicon and oxygen. It is found that these are stable and are fairly soluble in water. They also form several solid hydrates when crystallised from solution.
Complete step by step answer:
- $Si{{O}_{4}}^{4-}$ is called orthosilicate, which is the anion, or we can say any of its esters or salts. $Si{{O}_{4}}^{4-}$ is the basic structural unit of silicates. The structure of $Si{{O}_{4}}^{4-}$ is: 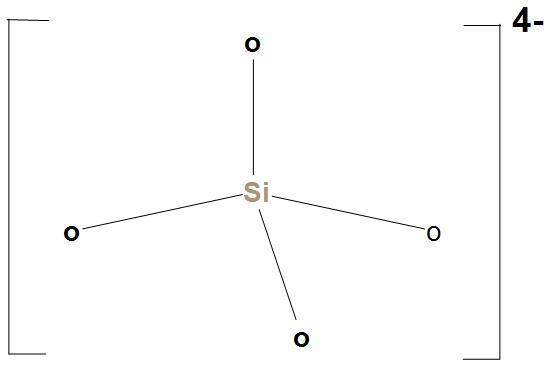 - It consists of a central silicon atom which is surrounded by four oxygen atoms. It is surrounded in the shape of a tetrahedron. The Si-O bond is 162pm long.
- In the anion, it is found that each oxygen carries a negative charge.
- Like sodium orthosilicate, orthosilicate salts are stable and also occur widely in nature as silicate minerals.
- Orthosilicate anion is found to be a strong base, which is a conjugate base of the extremely weak orthosilicate acid. This equilibrium is difficult to study since the acid tends to decompose into a hydrated silica condensate.
- Silicates are having wide applications. Some of the important applications are like:
- These are used to make ceramics and glass.
- These are also used as fillers in different dental filling materials.
- The silicate minerals are far the most abundant rock-forming minerals.
Hence, we can say that the correct option is (B), that is the basic structural unit of silicates is $Si{{O}_{4}}^{4-}$.
Note: $Si{{O}_{4}}^{4-}$ is also called silicon tetroxide anion. We should not get confused in terms of silicon and silicone. The main difference between both of these is that Silicon is a naturally occurring chemical element. Whereas, silicone is a synthetic substance.