Verified
147.3k+ views
Hint: A crystal or crystalline solid is a solid material whose constituent atoms, molecules, or ions are arranged in an orderly, repeating pattern extending in all three spatial dimensions. In crystallography, an anti-fluorite structure is acquired from a salt structure by exchanging anion and cation positions. 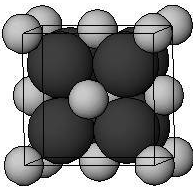 Additional Information
a.)Voids or interstitial spaces are the gaps present between various spheres of a crystalline solid.
b.)The tetrahedral void is formed when a particle in the second layer is above a void of the first layer.
c.)The octahedral void is formed when a void of the second layer is above the void of the first layer.
d.)There are twice the same number of octahedral gaps as there are tetrahedral openings, in a cross-section.
e.)Body-centered unit cell: When the lattice points are present at the eight corners of the unit cell as well as an additional point at the centre of the cell.