Verified
145.5k+ views
Hint: Mulliken Barker test is used to detect the presence of a mono nitro group in the compound. The presence of the nitro group can be observed by the shiny silver mirror that is formed at the end of the reaction.

Complete answer step by step:
The Mulliken Barker test is based on the fact that the nitro group $(-N{O}_{2})$ is reduced to hydroxylamine group $(-NHOH)$ with the help of a neutral reducing agent. The formed hydroxylamine compound $(-NHOH)$ reduces the Tollen's reagent $([Ag{(N{H}_{3})}_{2}]OH)$ and itself gets oxidised into a nitroso compound.
The following reaction takes place in Mulliken Barker test: 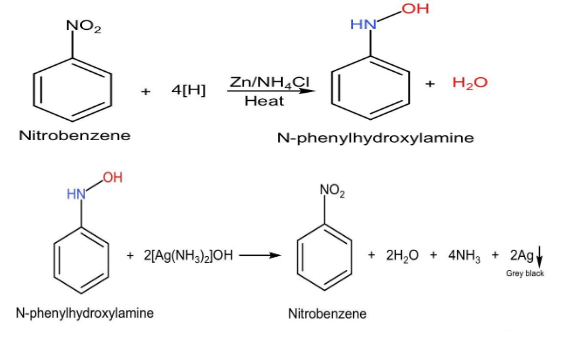 The given nitrobenzene is dissolved in dilute alcohol. To this solution we add a solution of ammonium chloride and zinc dust. Then boil the formed solution for about 2-3 minutes and then filter the solution to another test tube containing the Tollen's reagent. As you pour this solution to the reagent, a grey precipitate is formed and thus will turn to black which will indicate the presence of Nitro group or as we can say it will identify that the compound as nitrobenzene.