Malaria is caused by

Verified
91.8k+ views
Hint It is an infectious disease which is a mosquito-borne disease that affects human and other animals. It can cause various symptoms which include fever, vomiting, and headaches and can lead to yellow skin, coma, and death in severe cases.

Complete answer:
Malaria is caused by the female Anopheles mosquito which is a single-celled microorganism of the group plasmodium. On biting the mosquito introduces parasites from its saliva and transfers it into the person's blood. These parasites travel through the liver where they get matured and reproduce. In the life cycle of the malarial parasite, a mosquito infects by a bite and sporozoites get to enter into the bloodstream which migrates to the liver. These sporozoites the liver where they multiply in two merozoites and return to the bloodstream by rupturing the liver cells. Infect red blood cells and develop into ring forms, schizonts, and trophozoites which produce further merozoites. Other merozoites get to develop into immature gametocytes which are precursors of male and female gamete and the fertilized mosquito bite infected person through which the gametocytes are taken with the blood and mature into the mosquito gut. The form ookinetes and develop into new sporozoites that migrate to the insect salivary gland and infect the new vertebrate host. When a mosquito takes a blood meal sporozoites to get injected in the skin in the saliva.
The infection begins in 8 to 25 days and occurs later in those who have taken anti-malarial medications as prevention. The disease can be indicated by various symptoms which include fever, headache, shivering, vomiting, joint pain, jaundice, haemoglobin in the urine, retinal damage, and convulsion. Plasmodium has various five species that can infect and spread by humans. Plasmodium falciparum and plasmodium vivax are the general cause of malaria. Plasmodium knowlesi does not cause any disease in humans. Malaria can be diagnosed by the microscopic examination of blood by using blood films for an antigen-based rapid diagnostic test. The parasite’s DNA is detected by the polymerase chain reaction which gets developed and due to their cost and complexity are not used as where malaria is common. Malaria is white spread in the tropical and subtropical regions around the equator which includes Saharan Africa II and Latin America uh where there are 228 million cases of malaria which result in an estimated 405000 deaths. Malaria affects the places where it is associated with poverty and has a significant negative effect on its economic development. 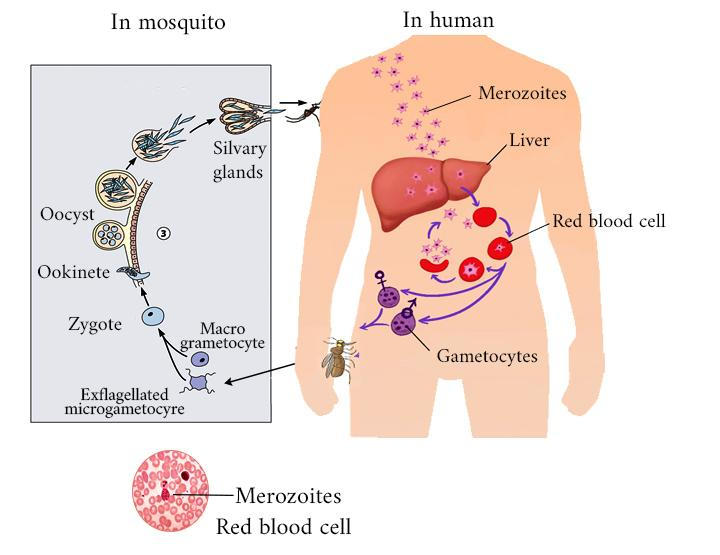