Give a balanced chemical equation for the carbylamine reaction.

Verified
118.8k+ views
Hint It is also called Hofmann isocyanide synthesis. This is also used for the preparation of secondary amines. 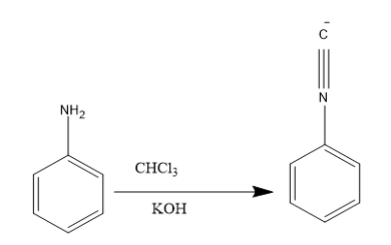 This reaction is also called Hofmann isocyanide synthesis and as it is used for the primary amine analysis test. It is also called as Saytzeff’s test.
The reaction is carried out through an intermediate formation and the intermediate formed here is dichlorocarbene. The intermediate to which the amine is added is the dehydrohalogenation product of the chloroform and the reaction proceeds through two successive steps in which the dehydrochlorination reaction takes place which yields the isocyanide.