What is the formal charge on atoms in carbonate and nitric acid?

Verified
Hint: The charge assigned to an atom in a molecule is known as formal charge and is calculated by the formula $FC = V - N - B/2$ .
Where V-> Number of valence electrons of an atom in its ground state.
N-> Number of nonbonding electrons
B-> The total number of electrons which are shared in covalent bond
Complete step by step answer:
Formal charge is calculated using $FC = V - N - B/2$
The carbonate ion \[[C{O_3}^{2 - }]\] already has a charge of 2- 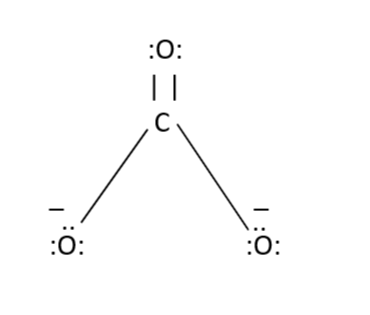 So, the carbonate ion carbon atom is connected with two oxygen atoms with the help of single bonds and with one oxygen atom by double bond as shown above.
Now let us calculate the formal charge of the oxygen atom which is connected to the carbon atom with the help of double bond-
Here,
$V = 6$ (Since oxygen has 6 valence electrons- 2 in 2s subshell and 4 in 2p subshell)
$N = 4$ (You can count it from the figure, that there are 4 electrons which are not taking place in bonding)
$B = 4$ (A double bond between C and O which means 4 electrons)
On calculating we get-
$
6 - 4 - 4/2 = 0 \\
\\
$