Draw the structure of acetonitrile.

Verified
92.1k+ views
Hint:. Acetonitrile is also known as methyl cyanide. It is a chemical compound with the molecular formula \[C{H_3}C \equiv N\]. We know that carbon will be the central metal atom and Nitrogen and the other carbon atom with methyl group will be attached to it. 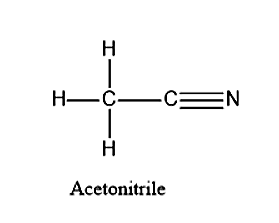 Additional information: Acetonitrile have the following characteristics.
- Acetonitrile is a transparent liquid.
- It has an aromatic odour.
- It is a polar aprotic solvent.
- There are other names for acetonitrile, they are ethyl nitrile, methyl cyanide and ethane nitrile.
- Acetonitrile has various applications such as, it is used in perfumes, pharmaceuticals, nail polish removers, pesticides and rubber products.