Verified
Hint: Lipids are also known as fats. They are found underneath our skin all over the body. The main function of lipids is to store energy. Lipids are used by our body in different ways.

Complete answer:
A lipid is a macromolecule and it is generally insoluble in polar solvents like water. Lipids are organic molecules, generally hydrocarbons i.e. they are formed of long chains containing carbon and hydrogen and also contain oxygen or alcohol groups.
Lipid is the main part of a cell membrane and is present in every cell of the human body.
We find lipids in the adipose tissue which is the layer beneath our skin and hence is found all over the body. Its function is the store energy in the form of fat.
However, we can divide lipids into two parts, generally simple lipids and complex lipids. The main difference is that simple lipids do not carry other molecules but complex lipids are fatty acids with alcohols or other molecules.
We can define complex lipids as esters containing lipids which contain a fatty acid, an alcohol and other molecules in addition. Generally complex lipids are of two types namely phospholipids and glycolipids.
Now we will discuss the functions of lipids-
-Complex lipids are water insoluble and therefore can be stored in the body and acts as an energy reservoir and it is an important constituent of our cell membrane and lipids have high calorific value hence provides us with energy.
-Phospholipids play an important role in transportation and absorption of fatty acids. They also acts as a carrier of natural fat soluble vitamins like A, D and E.
Examples of lipids- Cholesterol is a lipid as well as a protein. Other common examples of lipids are butter, oil, steroids and waxes. 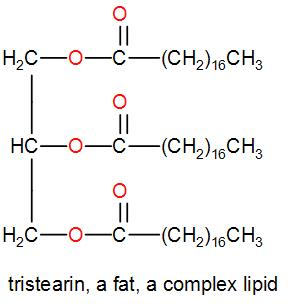 Note: Lipids are generally insoluble in polar solvents and can store food in the form of energy as they are non-polar. Our bodies generally use biosynthetic pathways to synthesize and break down lipids but there are a few essential lipids that can’t be synthesized in this way like omega-3 and omega-6 fatty acid and therefore we need to obtain it by diet.

Difference Between Lipids and Fats

Conjugate of a Complex Number

Difference Between Simple and Complex Tissues