Commercial electric motors do not use:
A. An electromagnet to rotate the armature.
B. Effectively a large number of turns of conducting wires used in the current carrying coil
C. A permanent magnet to crate the armature
D. A soft iron core on which the coil is wound.

Complete step by step answer:
The principle of an electric motor is working on the basis of the magnetic field produced around the current carrying conductor. A current carrying conductor is placed perpendicular to the magnetic field so that it is felt by a force. The coil is made up of copper wire. It is because copper is such an excellent conductor. It is now wind on an armature coil. The coil will become an electromagnet when a current flows through it. The DC motor is used to be a readymade generator that will produce electricity. All that you have to do is to turn the Axle of the generator which is mechanical outside the source of energy. the electric motors will not use a permanent magnet to crate the armature. Instead they are using electromagnets. 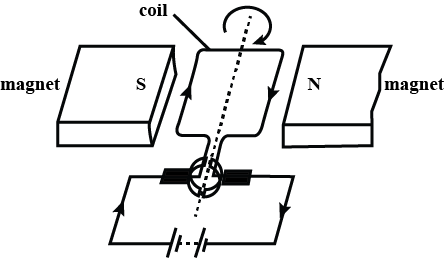