Verified
178.2k+ views
Hint: Antibodies are produced as part of the acquired immunity which is pathogen-specific. Acquired immunity has a memory which means that when the body is exposed to pathogens for the first time it produces a low-intensity primary response, but the secondary response is much stronger because of memory.

Complete answer:
Antibodies are produced by plasma cells also known as plasma B cells which are white blood cells (leukocytes) in response to pathogens in the body. Antibodies carry out acquired immunity which is mediated by two types of cells known as B-lymphocytes and T-lymphocytes. The B-lymphocytes are cells that produce proteins called antibodies whereas T-cells help the B-cells in producing the antibodies. Antibodies are proteins consisting of four peptide chains out of which two are small and called light chains and the other two are long known as heavy chains. Thus, H2 L2 is used to represent an antibody.

Additional Information:
Histiocytes: Also known as macrophages, it is a type of white blood cell created by the bone marrow. These are specialized cells that are involved in the detection, phagocytosis, and destruction of pathogens. They are also responsible for presenting antigens to T-cells and initiating inflammation.
Mast cells: Mast cells play an important role in inflammation, defense against pathogens, and allergic reactions. These cells are present in the boundaries between tissues and external environments such as mucosal surfaces of the gut and lungs.
Fibroblasts: A fibroblast is a type of spindle-shaped cells that is present in the interstitial spaces of organs and is the primary source of extracellular matrix (ECM) proteins like collagen.

So, the correct option is ‘Plasma cells’.

Note: -Antibodies are of different types such as IgG, IgA, IgM, IgE, IgD.
-Since antibodies are found in the blood, antibody-mediated immunity is also known as humoral immune response.
-There is another type of acquired immunity that is cell-mediated in which the T-lymphocytes kill cells that are not part of the body. 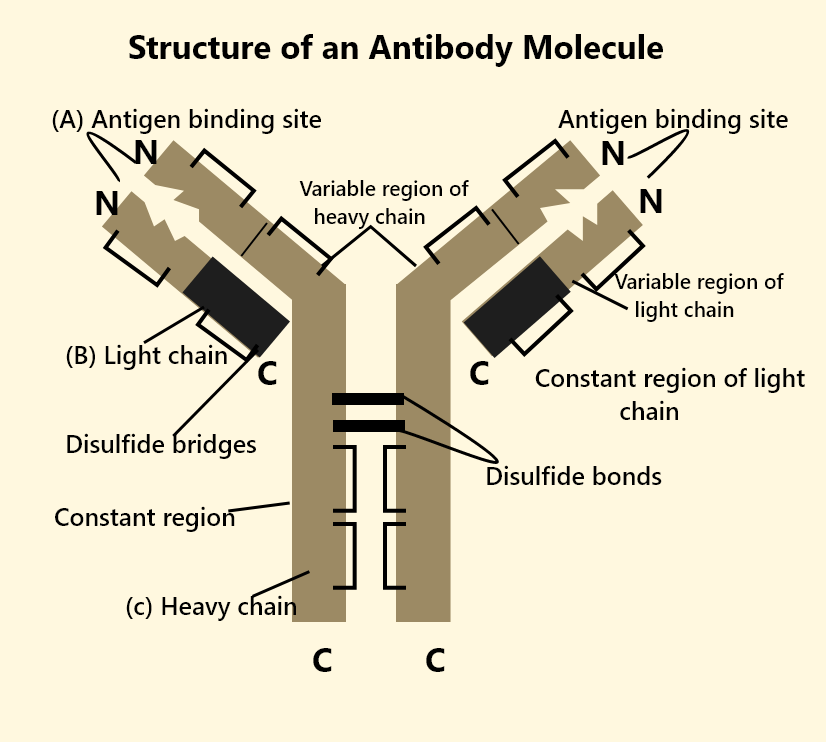