The world is constantly getting changed with the help of History. Individuals get to explore the triumphs and wonders of the past through History. Mankind gets inspired by the progress from the past, puts efforts in the present, aspiring to bring about changes in the future. The NCERT Solution Class 10 History Chapter 2 of The Contemporary World II enables the learners to travel back in time. They receive their education on the Age of Industrialization and the Growth of the Nationalist Movement.

The learnings of students are tested by multiple-choice questions and answers format along with objective and subjective questions with their respective answers. The students should use Class 10 History Chapter 2 NCERT Solution for group studies and also to study individually as a supplement revision material and appear for the board exams with utmost confidence. Subjects like Science, Maths, English,Hindi and Social Science will become easy to study if you have access to NCERT Solution for Class 10 Science, Maths solutions and solutions of other subjects. You can also download NCERT Solutions for Class 10 Maths to help you to revise complete syllabus and score more marks in your examinations.
Trending pages
CBSE Syllabus for Class 10 Social Science Term (1 & 2) 2021-22 Board Exam 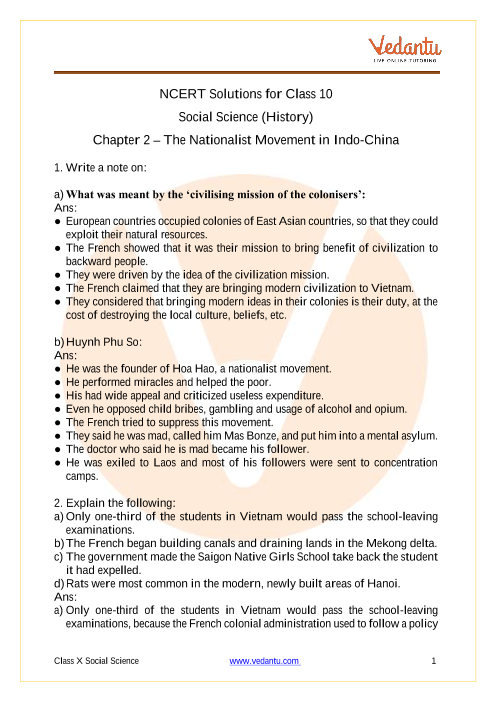 Ans: Only one-third of the students in Vietnam would pass the school-leaving examinations because the French colonial administration used to follow a policy of failing students in the final year examination which was deliberately done so that they could not qualify for better-paid jobs. Very less rich Vietnamese were able to afford enrolment in these kinds of expensive schools.

Ans: The French in the Mekong delta started to build the canals and draining lands for increased cultivation. This was done under a garb to “civilise” Vietnam on a European model. It was an economic idea to increase the production of rice and export rice to the global market.

Ans: When the French principal of Saigon Native Girls School expelled the students protesting another student’s expulsion, there was remonstration. Considering the situation, the government decided to control the protest by providing an outlet- making the school take back the students.

Ans: Rats were found commonly in the modern and newly built areas of Hanoi since hygienic sewage provided ideal breeding grounds for rodents apart from being a good transport system as well, for rats. Sewage from the old city was drained out because of heavy rains into the river. Larger sewers became a protected breeding and living space for rats. Hanoi became the chief cause of the plague in 1903.

3. Describe the ideas behind the Tonkin Free School. To what extent is it a typical example of colonial ideas in Vietnam?

Ans: The ideas behind the Tonkin free school system are given below:

4. What was Phan Chu Trinh’s objective for Vietnam? How were his ideas different from those of Phan Boi Chau?

1. With reference to what you have read in this chapter, discuss the influence of China on Vietnam’s culture and life.

Ans: The influence of China on Vietnam’s culture and life are discussed below:

2. What was the role of religious groups in the development of anti-colonial feelings in Vietnam?

Ans: The role of the religious groups in the field of development of anti-colonial feelings in Vietnam are given below:

3. Explain the causes of the US involvement in the war in Vietnam. What effect did this involvement have on life within the US itself?

Ans: The US got involved in the war in Vietnam since it feared that a communist government would come to power in Vietnam after the National Liberation Front formed a coalition with the Ho Chi Minh government in the North. US policy planners feared a spread of communist to other countries in the area.

Involvement in the Vietnam war affected life within the US itself because of widespread public dissent. Only university graduates were exempted from compulsory service in the army and this caused even more anger in the minorities and working-class families.

4. Write an evaluation of the Vietnamese war against the US from the point of

Ans: From 1965 to 1972, there were huge causalities caused to Vietnam and the USA, as the US-Vietnam war going on.

The Vietnam people suffered property and human losses, then also they never stopped their struggle for freedom. The role played by the porters in getting freedom and unity in Vietnam was important. Porters set out without fear on Ho Chi Minh Trail, which was a great expansive network of roads and footpaths. The porters carried 25 kg to 70 kg of weight on their bicycles and backs. They walked on the narrow, dangerous roads. They did not feel afraid of being shot down by aircraft’s guns. This shows that porters were patriotic and heroic.

Ans: The Vietnamese women played important role in the US-Vietnam war. They were both workers and warriors. As warriors and soldiers, they constructed 6 airstrips, neutralised thousands of bombs and shoot down 15 planes. There were 1.5 million Vietnamese women in the regular army, the militia, the local forces and professional teams.

Ans: The role of women in the nationalist struggle in India are mentioned below:

In Class 10th History Chapter 2 - The Nationalist Movement in Indo-China, Vietnam which happens to be one of the most significant states of the Peninsula is introduced. The emergence of the Indo-China region is discussed. It covers how Cambodia, Laos, and Vietnam came out stronger from China’s shadow.

The 10th Class History Chapter 2 also goes on to discuss very important issues like diseases and everyday resistance, hygiene, religion and anti-colonialism, the dilemma of colonial education, vision of modernization, etc. You will also learn about the communist movement and the Vietnamese Nationalism. What was the role of women in the anti-imperialist movement of Vietnam? In this chapter, there are a total of nine questions asked in all the exercises combined.

Why Should You Download NCERT Solutions Class 10 History Chapter 2 PDF?

The answers relevant to the questions asked in the exercises of the textbook are explained in the NCERT Solutions for Class 10 History Chapter 2. A much-qualified team is in charge of designing the solutions given in the NCERT Class 10 History Ch 2 Solutions PDF. The PDF files which are available for download contain solutions that have taken a specialized effort by an expert team. The comprehensive ability of Class 10 students has been taken into consideration before solving the questions.

The team of experts has given a detailed explanation of the topics relating to the chapter for a better understanding of the students. And, better understanding always results in quick grasping. The solutions are framed strictly as per the C.B.S.E. guidelines. All the NCERT Solutions Class 10 History Chapter 2 is given to make the process of studying interesting and simple. NCERT Solutions Class 10 Social Science History Chapter 2 can also be downloaded to revise the syllabus and increase the score in the exams.

Vedantu’s Class 10 History Chapter 2 NCERT solutions have solutions to the questions in the exercises from the chapter ‘The Nationalist Movement in Indo-China’. You could view and download those solutions from Vedantu’s PDF Ch 2 History Class 10 NCERT Solutions. At Vedantu, an immense amount of emphasis is laid on making the answers to the point and relevant. Vedantu ensures the solutions to the questions are specific. Vedantu tries to ease the process of learning, as a result, making you score better.

The team of experts at Vedantu give out solutions that are up to the mark. The concepts are clearly explained in detail. The revision and learning of the answers by the students can be pretty quick for Chapter 2 - The Nationalist Movement in Indo-China. The detailed description also helps in clearing doubts of the students. The doubt clearing sessions are given by Vedantu also facilitates a better understanding of social studies chapters in Class 10.

1. How Does Referring to a History Solution Guide Make you Better?

When you refer to Lesson 2 History Class 10 solution guide you get to study precise answers in a simple language style. You learn how to make impressive answers with simple vocab. That’s how referring to a History solution guide could make you better at answering the questions.

2. Why do you Need Class 10 History Chapter 2 NCERT Solutions?

In order to write answers to the questions on History topics, you require specific knowledge on historical topics along with writing skills to write the answers precisely. Using the SST Ch 2 History Class 10 NCERT solutions help you understand the format for writing the answers the best way.

The following are the benefits of the Ch 2 History Class 10 NCERT Solutions.

4. Which are the main topics covered in Chapter 2 of NCERT History Solutions for Class 10?

Students should study all the above-mentioned topics to be thorough with Chapter 2.

5. How can I use the NCERT Solutions for Class 10 History Chapter 2 more effectively?

You can download the NCERT Solutions for Class 10 History Chapter 2 PDF for free from Vedantu. You can read them for better understanding, and revise them as notes before the exam. As the language is lucid and the explanation is simple, you can learn the chapter on your own by reading the solutions. You can also learn how to write the answers in the exams to secure high marks. These solutions are available at free of cost at Vedantu's official website(vedantu.com) and mobile app.

6. Write a short note on the civilizing mission of the colonizers?

The civilizing mission of the colonizers meant that the East Asian countries were occupied by the European countries to exploit their natural resources. The mission of the French was to help backward people by civilizing them. They were inspired by the civilizing mission. The French believed that they must bring modern and new ideas to their colonies by destroying local culture and beliefs. The mission aimed to civilize the people of their colonies by making changes in their living habits too.

7. Why did the French start building canals and draining lands in the Mekong Delta?

The main aim of building canals and draining lands was to enhance cultivation. Building canals and draining canals helped to increase the production of rice due to the sufficient availability of water. It also helped in increasing the export of rice to the international market. The area for cultivation for rice increased many times which increased the production of rice. Vietnam started exporting rice and it became the third-largest exporter of rice throughout the world.

8. What led to the end of the war between the US and Vietnam?

Many reasons led to the end of the war between the US and Vietnam. The war did not give any benefits to the US because many people died in the US during the war. The war was shown on television which made the people against the policy of war followed by the US. people were questioning the government which led to the end of the war. Moreover, the wishes of the US could not be fulfilled which ended the war.

Chapter 1 - The Rise of Nationalism in Europe
Chapter 3 - Nationalism in India
Chapter 4 - The Making of a Global World
Chapter 5 - The Age of Industrialisation
Chapter 6 - Work, Life and Leisure