What is Dipole Moment?

δ+ and δ- indicate positive and negative charges, which are separated by distance d. These charges are equal in magnitude but opposite in sign.

The arrow signifies the shifting of electron density in the molecule.

Dipole Moment Formula
Dipole moment definition can be given as the product of magnitude of electronic charge of the molecule and the internuclear distance between the atoms in a molecule. It is given by the equation:
Dipole moment (µ) = Charge (Q) × Distance of separation (d)
(µ) = (Q) × (d)
where, μ is the bond dipole moment, Q is the magnitude of the partial charges 𝛿+ and 𝛿–, and d is the distance between 𝛿+ and 𝛿–.
It is measured in Debye units, represented by D.
D = 3.33564 ×10-30 Cm; C = Coulomb, m = meter.

5. In tetra-atomic boron trihydride (BH3), the dipole moment is zero, but that of ammonia (NH3) is 1.49D. This is because BH3 has a symmetrical structure and the 3 B-H bonds are placed at an angle of 120 degrees to each other. As the 3 bonds are in a single plane, dipole moments cancel each other, with net dipole moment equal to zero. On the other hand, NH3 has a pyramidal structure, with 3 N-H bonds and a lone pair on nitrogen atom. This gives the resultant dipole moment as 1.49D. 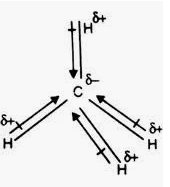 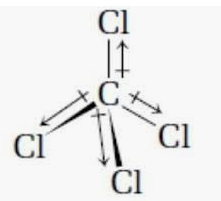 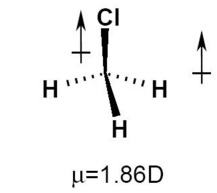