Which of the following are bidentate monoanionic ligands?
1. Acetylacetonato
2. Oxalate ion
3. Dimethylglyoximato
Select the correct answer using the codes given below:
A. 1 only
B. 1 and 3 only
C. 2 only
D. 2 and 3 only

Verified
179.7k+ views
Hint: Ligands in coordination chemistry are the donor atoms, molecules or ions which can donate a pair of electrons to the metal atom to form a coordinate bond.
The term ‘monoanion’ in chemistry is used to refer to an anion carrying only a single negative charge.

Complete step by step answer:
The ligands attached to the central metal atom in coordination compounds may contain one or more than one donor atom.
If only one donor atom is present in the coordination compound which can coordinate to the central metal atom, then the ligand is called a unidentate ligand. Unidentate means having one point of attachment or having one tooth as ‘uni’ means one and ‘dent’ means tooth. Unidentate ligands are also known as monodentate ligands. For example, ammonia, water etc. are unidentate ligands.
Similarly, if the ligand contains two donor atoms which can coordinate to the central metal atom or ion, then the ligand is called a bidentate or tridentate ligand. Bidentate or tridentate means having two points of attachment. The two donor atoms are positioned in such a way that a five or a six membered ring is formed with the metal ion. This ring is called a chelate ring and the resulting complex is called a metal chelate.
Let us first consider the acetylacetonate ion. It is denoted by the symbol ‘acac’. From its structure, it can be seen that acac contains two oxygen donor atoms and carries only a single negative charge. Thus, it is a bidentate monoanionic ligand. 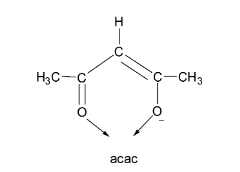 Next, the oxalate ion denoted by the symbol ‘ox’ has two oxygen donor atoms and carries two negative charges. Thus, ox is a bidentate dianion ligand.

Lastly, the dimethylglyoximato ion denoted by the symbol ‘dmg’ has two donor atoms, one nitrogen and one oxygen donor atom and carries only a single negative charge. Thus, dmg is a bidentate monoanionic ligand.

So, both 1 and 3 are correct and so the correct option is B.

Note:
Chelating ligands can form more stable complexes than the unidentate ligands. This is known as the chelating effect.
More the denticity of ligands, more stable is the chelate formed.
Chelates are used in the softening of hard water and also in the separation of lanthanoids and actinoids.
Read Less