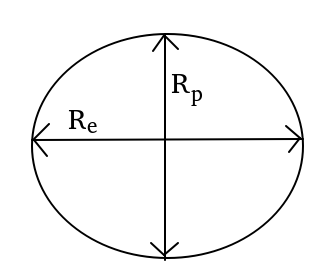 We can observe from the above image that earth is not a perfect sphere. It is slightly bulged at the equator, and flattened at the poles. Thus, from the above diagram we can observe that;
$R_e > R_p$
where, $R_e$ is the diameter at the equator, $R_p$ is the diameter at the poles
We know from the gravitational attraction and thus the acceleration due to gravity ‘g’ becomes:
$\begin{align}
& g=\dfrac{GM}{{{r}^{2}}} \\
& \Rightarrow g\propto \dfrac{1}{{{r}^{2}}} \\
\end{align}$


×
Sorry!, This page is not available for now to bookmark.
Bookmark added to your notes.
View Notes
×

The Making of a Scientist

Changing the Period of a Pendulum

Evolution of Life on Earth

Why Doesn't The Moon Fall Into The Earth?

The Ghat of the Only World Summary