Diamond is the hardest allotrope of carbon. Give reason for its hardness.

Verified
129.3k+ views
Hint: Carbon has well known allotropes like graphite and diamond. It is very interesting to know that both are made up of the same element, carbon, yet diamond is the hardest known mineral whereas graphite is very soft. The reason lies in the physical structure of the two. 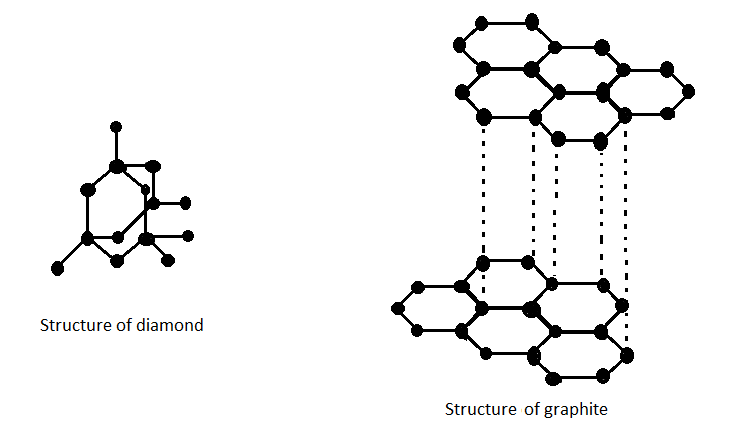 Each carbon atom in a diamond is covalently bonded to four other carbons forming a tetrahedral structure. These tetrahedrons together form a 3-dimensional network of carbon rings. This stable network of covalent bonds and hexagonal rings makes diamond the hardest allotrope of carbon and also the hardest mineral. Graphite has covalent structure where each carbon atom is joined to three carbon atoms by covalent bond. The carbon atoms form layers with a hexagonal arrangement of atoms.
Carbon is known to form many allotropes due to its valency. There are 8 allotropes of carbon, the most common being diamond and graphite.
Note: Contrast to diamond, graphite is a very soft allotrope of carbon. It is dull and dark unlike diamond which is known for its shining and luster. However, graphite can conduct electricity and diamond cannot. The reason lies again in the difference of structure between the two.