In this day to day growing world, sources of online education have also grown so far which makes it even more difficult for students to choose a reliable platform for them. Nowadays, finding NCERT Solutions online or offline is easy as there are sufficient resources available but the tough part is choosing the best one out of them for yourself. Vedantu is the one such platform you can blindly trust if you want to score high in your exams. We provide you the solutions that you need to score higher marks in every examination.

We provide you the best study material for Class 6 from which you can boost up your preparation. The best part of Vedantu is you can find all your solutions here in just a click. Vedantu provides you all the books in PDF format with their proper NCERT Solutions by experts. 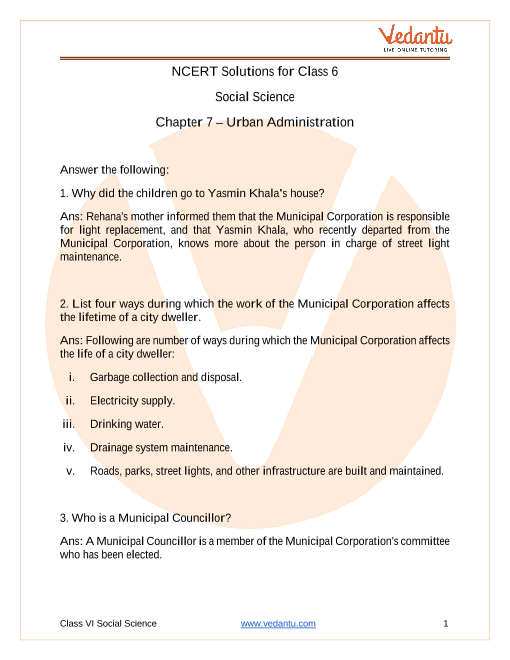 Q1. Why did the children go to Yasmin Khala's house?

Q2. List four ways during which the work of the Municipal Corporation affects the lifetime of a city dweller.

Ans: Following are number of  ways during which the Municipal Corporation affects the life of a city dweller:

Roads, parks, street lights, and other infrastructure are built and maintained.

Q3. Who is a Municipal Councillor?

Ans: A Municipal Councillor is a member of the Municipal Corporation's committee who has been elected.

Q4. What did Gangabai do and why?

Ans: Gangabai collected a group of ladies and marched to the Ward Councillor, raising slogans against the situation of the road. She did this because there was rubbish strewn over the street, bringing mosquitoes, flies, dogs, and rats to the area.

Q5. How does the Municipal Corporation earn the cash to try to do its work?

Ans: The Municipal Corporation receives funds from a variety of sources:

In the two photographs you see alternative ways of collecting and disposing garbage.

Which way do you think provides safety to the person disposing garbage?

What are the risks of collecting garbage in the manner shown within the first photograph?

Why does one think that proper ways of disposing garbage aren’t available to those that add municipalities?

Ans: i.) The waste disposal method in the second photo is better.

ii.) The major dangers of collecting garbage in that manner are health hazards. Those people may get infected or may fall ill.

iii.) The unavailability of proper ways of disposing of garbage is due to a lack of finances. Another reason could be the irresponsible attitude of the municipal officers towards the well-being of the workers.

Q7. Several poor people in the city work as domestic servants as well as work for the Corporation, keeping the city clean. Yet the slums in which they live are quite filthy. This is because these slums seldom have any water and sanitation facilities. The reason often given by the Municipal Corporation is that the land during which the poor have found out their homes doesn’t belong to them and that slum-dwellers do not pay taxes. However people living in middle class neighbourhoods pay very little in taxes compared to the quantity of cash the corporation spends on them in setting up parks, street lighting facilities, regular garbage collection etc. Also as you read during this chapter, the property taxes collected by the Municipality makes up only 25-30 per cent of its money. Why do you think it is important that the Corporation should spend more money on slum localities? Why is it important that the Municipal Corporation provide the poor within the city with the same facilities that the rich get?

Ans: The Municipal Corporation should pay more money and attention towards the sanitation of slum communities.

Because slum regions are also a part of the society, the government should invest in them. If the government does not do so, it is immediately discrimination on the basis of economic status.

Taxes are imposed on those who live near slum regions. The lack of services in slum regions has an impact on the lifestyle of neighbouring communities who pay taxes.

Diseases from the slums might spread to the communities around them.

NCERT Social Science is divided into three parts which include History, Geography, and Civics (Social and Political Life). History contains 12 chapters, Geography has 8 chapters and Civics includes 9 chapters as per the new syllabus of 2020-21. All detailed solutions of NCERT Class 6 Social Science Chapter 7 by top-class educators are provided here at Vedantu.

NCERT Class 6 Social and Political Life chapter 7 Urban Administration contains eight questions based on the concepts of the chapter. All the answers available on the Vedantu platform are written in easy and understandable language so that you not only understand it well but also you can score more.

NCERT Class 6 Social Science has 3 parts and a total of 18 chapters which includes 12-History, 9-Civics, and 8- Geography. Each chapter has questions divided as long and short. All the solutions are available in PDF format on Vedantu.

NCERT Solutions Class 6 Social Science sst all the detailed answers are available on Vedantu. The links to the solutions of the chapter in pdf format is given below:

NCERT is said to be the mother of all the books and the questions as the content in this book is accurate and helpful for many other competitive exams also. The questions of NCERT books are selective so everyone should practice all the questions. The pattern of NCERT is universal.

This year CBSE board has reduced the 30% syllabus from the board classes mainly 12th. Vedantu provides you all the latest updates and Solutions with sample papers which makes your preparation better than others.

Vedantu is a multi-service platform that provides you everything regarding your preparation. On our platform, you can find all the study materials including  NCERT books and their solutions in PDF format.

Here, everything is provided by the experts so Vedantu is all you for your examination requires. NCERT book of all the classes and subjects with their detailed chapter-wise solutions are available just a click away.

1. Are the solutions provided by vedantu accurate enough for the Class 6 Social and Political Life exam?

2. How beneficial is Vedantu for my Class 6 Social Science preparations?

Vedantu boosts your preparations with it's study materials. We provide you the best NCERT Solutions you can have on the internet which lets you understand the chapters even better. Unlike other e-learning platforms you don't have to worry about too much surfing and searching for solutions here you get all you want in just a click. So Vedantu is the best option for your Class 6 preparations.

The Earth Our Habitat
History - Our Past