Class 12 Biology Chapter 12 is all about biotechnology. It is comparatively a newer division of science and engineering where biological forms are developed and made better using certain scientific techniques. This chapter will explain how such techniques are developed and utilized.

To understand the concepts of this chapter, refer to the Biotechnology notes prepared by the experts. Find out how the experts have explained these concepts in a concise format and develop your knowledge. Learn how you can answer the exercise questions from the solutions framed by the experts to sharpen your answering skills.

1. The bacterium which causes a plant disease called crown gall is ………………

Ans: The correct option is (b) Agrobacterium tumefaciens.

The Agrobacterium tumefaciens attacks the plant if there is any injury or wound in the plant. The gram-negative bacteria contain the Ti plasmid that is responsible for the tumour in the host cells. When the bacteria enter the plant, the tumour-causing genes in the Ti plasmid cause the growth of tumours in the host plant. This results in the formation of galls on various parts of the plant such as roots, branches, stems, etc. Hence, the disease caused by this bacteria is called crown gall disease.

2. The enzyme nuclease hydrolyses ……………… of polynucleotide chain of DNA.

Ans: The correct option is (b) Phosphodiester bonds.

PCR is an amplification technique that is generally used to create millions to billions of copies of DNA from a small segment of DNA. It consists of mainly three steps that are denaturation, annealing and extension. This technique is very important in DNA fingerprinting, gene therapy, parental testing and detecting point mutations. The PCR method is becoming very useful in various fields of science as it is a faster method.

4. Which of the following is the recognition sequence of restriction enzyme hind III?

Hind III is an endonuclease that is isolated from the bacterium Haemophilus influenzae. This endonuclease identifies and cuts the DNA at a specific segment which is 5’---A-A-G-C-T-T---3’. Hence, the recognition sequence of the HindIII restriction enzyme is 5’---A-A-G-C-T-T---3’. This restriction enzyme works in the presence of magnesium ion, which acts as a cofactor.

5. Recombinant protein ………………….. is used to dissolve blood clots present in the body.

Ans: The correct option is (b) Tissue plasminogen activator.

The Tissue plasminogen activator is a serine protease enzyme that is produced from the cells that form the inner lining of blood vessels or endothelial cells. Tissue plasminogen activator plays a very important role in the breakdown and dissolution of blood clots that occur in the body. It is also made in the laboratory to treat various problems related to the heart and lungs.

1. Name the vector which is used in production of human insulin through recombinant DNA technology.

Ans: The cloning vector which is used in the synthesis of human insulin through recombinant DNA technology is pBR322. The pBR322 is present as a circular plasmid in the E.coli bacteria. It is extracted from the bacteria and cut by restriction enzymes. After this, the human insulin-producing genes are inserted into the gap of the cloning vector. The genetically modified plasmid is now introduced into the bacteria such as E. coli or yeast such as Saccharomyces cerevisiae. As these bacterial or yeast cells divide, human insulin is produced.

2. Which cells from Langerhans of pancreas do produce a peptide hormone insulin?

Ans: The beta cells that form about 75 percent of each islet of Langerhans of the pancreas are responsible for the production of the peptide hormone insulin.

3. Give the role of Ca⁺⁺ ions in the transfer of recombinant vector into bacterial host cell.

4. Expand the following acronyms which are used in the field of protechnology.

Ans: The acronyms are expanded below:

b. RE: Restriction Enzyme

5. Fill in the blanks and complete the chart.

Ans: The complete chart is:

1. Explain the properties of a good and ideal cloning vector for rDNA technology.

Ans: There are some properties that a good and ideal cloning vector should have:

2. A PCR machine can rise temperature upto 100℃ but after that, it is not able to lower the temperature below 70℃ automatically. Which step of PCR will be hampered first in this faulty machine? Explain why?

3. In the process of rDNA technology, if two separate restriction enzymes are used to cut vector and donor DNA then which problem will arise in the formation of rDNA or chimeric DNA? Explain.

4. Match and write the pairs.

Ans: The correct matches are:

2. Explain the steps in the process of rDNA technology with suitable diagrams.

Ans: The steps involved in the process of rDNA technology are: 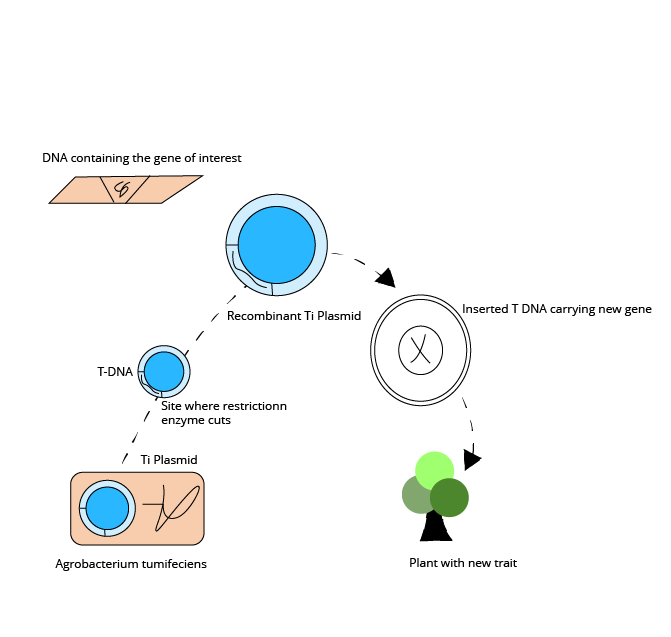 3. Explain the gene therapy. Give two types of it.

Ans: Gene therapy is the treatment of certain diseases using nucleic acid polymers that will replace or alter the mutated gene with the correct gene. This will treat the genetic abnormalities.

There are two types of gene therapy:

4. How are transgenic mice used in cancer research?

Ans: Transgenic mice are widely used in cancer research in the following ways:

5. Give the steps in PCR or polymerase chain reaction with suitable diagrams.

Ans: PCR is an amplification technique that is generally used to create millions to billions of copies of DNA from a small segment of DNA. It consists of mainly three steps that are denaturation, annealing and extension. 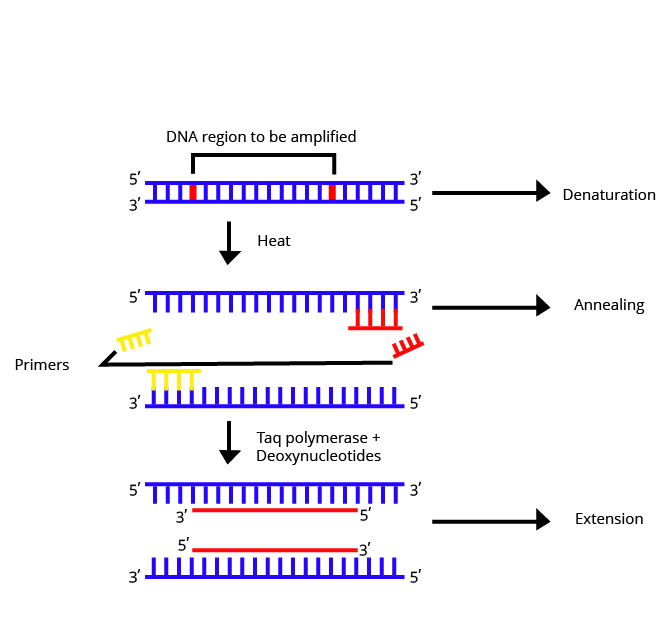 6. What is a vaccine? Give advantages to oral vaccines or edible vaccines.

Ans: A vaccine is a biological product in which weakened or dead microorganisms are used to increase the immunity of the human body against a specific disease causing organism. Hence, this vaccine acts as a prevention to a certain disease.

There are several advantages of oral or edible vaccines. These are:

Ans: The different types of restriction enzymes used in rDNA technology are:

The role of restriction enzymes is: They play a very important role in recombinant DNA technology. These enzymes are used to cut the DNA sequence at specific locations to get the desired DNA sequence or fragment.

8. Enlist and write in brief about the different biological tools required in rDNA technology.

Ans: The different biological tools required in rDNA technology are:

Class 12 Biology Chapter 12 of the Maharashtra Board deals with the different aspects of biotechnology. In this chapter, you will find the definition of this interdisciplinary domain of science and technology.

Biotechnology deals with the formation and alteration of various biological forms for the benefit of humans and the ecosystem. This is a unique branch of science where the techniques are developed to create new breeds for food, medicines, etc. The prime focus of biotechnology is to progress and make these aspects more sustainable.

Biotechnology has been modernized by the introduction of DNA technology. Previously, it was based on the use of microorganisms to prepare food, medicine, and other important products. Now, we can alter the genetic impression of a species using biotechnological methods and can prepare higher quality products or outcomes in particular fields.

This chapter also explains the cores of these technologies used in biotechnology. One of its cores is genetic engineering. As mentioned earlier, the genetic impression of various species can be altered using various methods. It is done to create better species for better outcomes.

Another core is chemical engineering. In this domain, various biotechnological processes are adopted to develop products like vaccines, enzymes, antibodies, therapeutics, etc in a sterile environment. To understand these concepts, refer to the Biotechnology Class 12 notes prepared by the experts.

Get the free PDF version of the Maharashtra Board Class 12 Biology notes Chapter 12 Biotechnology and prepare this chapter exceptionally. Get a simpler description of the concepts, scientific terms, definitions, etc. in this chapter and make your preparation better. Find out how the experts have answered all exercise questions to develop better answering skills.

The process of genetic manipulation of organisms for various purposes is called biotechnology.

Cloning is a biotechnological process where an entire copy of the genetic impression of an organism is replicated.

3. Why do we perform genetic engineering?

We perform genetic engineering to alter the genetic impression of an organism to make it better or to fulfill our particular requirements.  One of the biggest successes of biotechnology is mass-producing insulin and reducing its price.

Deoxyribose nucleic acid is the unit of hereditary material present in the chromosomes of living organisms. It maintains a sequence and carries the genetic information of an organism.

5. Why is the sequence of DNA determined?

The sequence of DNA is determined so that it can be cloned or identified as a gene. The determination results in performing various biotechnological functions.