Every organism reproduces to start another generation of the same species. This is the way of life. Plants are no different. They also have developed and followed different reproductive methods to carry on life.

Plants produce using different techniques. The plants belonging to the primitive classification adopt reproductive measures that are different from the higher ones. In Class 12 Biology Chapter 1 Reproduction in Lower and Higher Plants, we will learn about these methods. You can seek reference from the solutions of this chapter framed by the experts to develop a strong conceptual foundation.

4. Which of the following types require pollination but the result is genetically similar to autogamy?

5. If the diploid chromosome number in a flowering plant is 12, then which one of the following will have 6 chromosomes?

1. Name the part of gynoecium that determines the compatible nature of pollen grain.

Ans: Stigma is the part of gynoecium(pistil) that determines the compatible nature of pollen grain. Stigma ensures the intraspecific pollen germinates only, other than that the pollen having intraspecific differences should be prevented from getting germinated.

2. How many haploid cells are present in a mature embryo sac?

Ans: The number of haploid cells present in the mature embryo sac is 8 in number.

3. Even though each pollen grain has 2 male gametes, why are at least 20 pollen grains required to fertilize 20 ovules in a particular carpel?

Ans: The process of formation of haploid cells from the diploid cells is called meiotic division. The megaspore mother cell has a diploid number of chromosomes when it undergoes successive cell division and forms a haploid megaspore cell. This process is termed Megasporogenesis. Megasporogenesis takes place in the female gametophyte.

Ans: The pollination carried/facilitated by the water is termed hydrophily. Example-  Vallisneria, Ceratophyllum. The adaptation they hold are as follows-

6. Name the layer which supplies nourishment to the developing pollen grains.

Ans: The layer that supplies nourishment to the developing pollen grains is the tapetum layer found inside the anther.

Ans:  The development of fruit without fertilization is termed parthenocarpy. As a result of parthenocarpy, seedless fruits could be acquired. The term parthenocarpy was given by Noll in 1902.

8. Are pollination and fertilization necessary in apomixis?

Ans:  The development of an embryo without fertilization is termed apomixis.

9. Name the parts of the pistil which develop into fruits and seeds.

10. What is the function of a filiform apparatus?

1. How can polyembryony be commercially exploited?

2. Pollination and seed formation are very crucial for fruit formation. Justify the statement.

3. Incompatibility is a natural barrier in the fusion of gametes. How will you explain this statement?

4. Describe three devices by which cross-pollination is encouraged in Angiosperms by avoiding self-pollination.

1. Describe the process of double fertilization.

2. Explain the stages involved in the maturation of microspores into male gametophytes.

3. Explain the development of the dicot embryo.

Ans: The development of the dicot embryo can be classified in the following levels-

4. Draw a labeled diagram of the L.S. of the anatropous ovule and list the components of the embryo sac and mention their fate after fertilization. 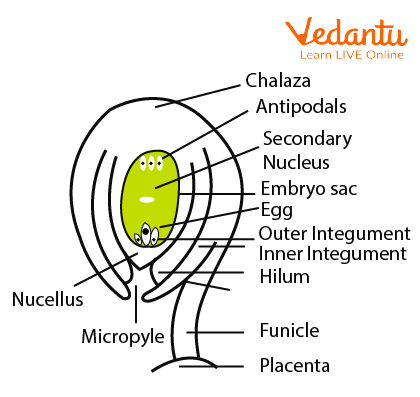 L.S. of The Anatropous Ovule

Fill in the Blanks

a fertilized egg grows into a seed from which the new plants can grow.

Ans: Syngamy takes place when one male gamete and egg fuse together.

Ans:  Pollination is the transfer of pollen grains from the anther of the flower to the stigma of the same or a different flower.

It is carried out by using different agents such as water, air animals, and birds.

Ans:  Once the pollen reaches the stigma, the pollen tube traverses down the stigma to the ovary where fertilization occurs.

Ans: The thalamus is the base of the flower to which other floral parts are attached.

Ans: The whorl calyx is green which protects the flower until it opens.

The calyx is a leafy structure that surrounds the flower' corolla', androecium, and gynoecium present within it.

As mentioned earlier, every organism reproduces. There are different methods of reproduction that a species has developed over the years. It is an essential process that ensures the continuity of life. In fact, it is a characteristic that defines life. A living organism will surely follow a way to reproduce and give birth to the next generation.

On the other hand, asexual reproduction is something different. In this method of reproduction, there is no involvement of gametes. Gametes are not produced or fertilized to create offspring. In this aspect, plants follow spore formation, budding, fission, fragmentation, and other asexual methods to produce young ones.

Most asexual methods are vegetative in nature. The process follows where the parent plant gives birth to an identical plant from any of its parts. Various such methods have also been developed artificially to promote vegetative reproduction in agriculture.

You can now download and get the free PDF version of the solutions along with the notes for the chapter Reproduction in Lower and Higher Plants. Find out a detailed explanation of the concepts related to reproduction in plants with examples in these solutions. Resolve your queries, make your preparation better and score well in the board exams.

1. What is binary fission?

The reproductive cells of plants are called gametes. They can be either male or female in nature.

The process of the formation of a zygote from the union of a male and female gamete in sexual reproduction is called fertilisation. This is the primary process where seeds are formed.

An embryo is formed when two haploid gametes unite to form a diploid zygote. This process occurs during sexual reproduction in plants.

5. How many sets of chromosomes does a plant embryo possess?

An embryo contains two sets of chromosomes and each set is received from each of the gametes.