What are Redox Reactions? 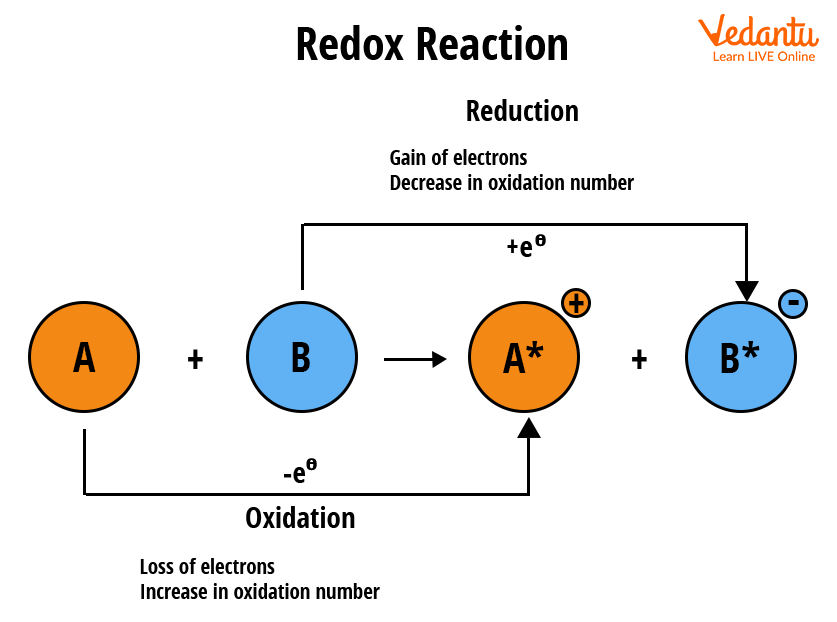 A redox reaction is a chemical reaction in which reactants lose and gain electrons. Changes in the oxidation states of the reacting species can be used to detect this electron transfer.

The breakdown of a substance into various compounds is what this type of reaction involves. In the first reaction sodium is being reduced from +1 to 0 while hydrogen oxidizes from -1 to 0. In the second reaction hydrogen reduces from +1 to 0 while oxygen goes from -2 to 0. Both these reactions are examples of  decomposition redox reactions.

These reactions are the inverse of decomposition processes, in these reactions two compounds combine  to generate a single compound in the form

Copper is reduced from +2 to 0 and zinc is oxidized from 0 to +2. This reaction is a displacement fresox reaction.

Disproportionation reactions are those that involve the same reactant being oxidized and reduced.

Phosphorus is oxidized and reduced from 0 to +1 in NaH2PO3 and -3 in PH3 hence this is an example of redox disproportionation reaction. Hence these are different types of redox reactions.

Redox reaction type examples with answers are as follows:-

These are two examples of redox reactions.

Oxidation number or oxidation state is the charge on an atom if all its bonds were assumed to be completely ionic. The element with higher electronegativity gets a negative charge and the atom with less electronegativity gets a positive charge. In a molecule one atom makes bonds with many other elements. The oxidation state of an element is proportional to the number of electrons involved in bond formation. Oxidation number can be zero, positive or negative. Depending on how many electrons are gained or lost, the atom might have different oxidation states. Oxidation number helps us to understand which element is being oxidized and which is being reduced in a chemical reaction.

Oxidation is defined as the loss of electrons and the resulting increase in the oxidation state of a given reactant. For example

Reduction is the process of gaining electrons and decreasing the oxidation state of a reactant. For example

Oxidizing agents are electron-accepting species that tend to undergo a reduction in redox processes.

Some examples of oxidizing agent are

A reducing agent is an electron-donating substance that has a tendency to lose  electrons.

Some examples of reducing agents are

Identification of oxidizing and Reducing Agent

In a compound, if an element is in its highest possible oxidation state. It has the ability to act as an oxidizing agent. KMnO4, K2Cr2O7, HNO3, H2SO4, HClO4 are some examples.

When an element in a compound has the lowest oxidation state, it can act as a reducing agent. H2S, H2C2O4, FeSO4, SnCl2 are some examples.

The compound will function as an oxidizing agent if a highly electronegative element is in its highest oxidation state.

The compound functions as a reducing agent when a highly electronegative element is in its lowest oxidation state.

The redox reaction can be balanced in two ways. The change in oxidation number of the oxidizing and reducing agents is one technique, while the other is based on separating the redox reaction into two half processes, one of reduction and the other of oxidation.

Multiply the reaction with 5

Multiply the reaction by 2

Oxidation number or oxidation state is the charge on an atom if all its bonds were assumed to be completely ionic. Depending on how many electrons are gained or lost, the atom might have different oxidation states. The oxidation state of neutral atoms is zero. The reaction can be balanced by any of the two methods.

FAQs on Types of Redox Reactions - Important Topic of JEE

1. When KMnO4 acts as an oxidizing agent and ultimately forms  MnO24-, MnO2, Mn2O3 and Mn+2. Then what is the number of electrons trans­ferred in each case?

Any chemical reaction in which the oxidation number of a molecule, atom, or ion changes by gaining or losing an electron is known as a redox reaction.

2. What is redox titration?

A redox reaction between the titrant and the analyte is used to determine the concentration of a given analyte in a laboratory setting. A potentiometer or a redox indicator may be required for these types of titrations.

The titrant and the analyte undergo an oxidation-reduction reaction, which is used in redox titration. One of the most common laboratory methods for determining the quantity of unknown analytes is redox titration. The titration of potassium permanganate (KMnO4) against oxalic acid (C2H2O4) is an example of a redox titration.