J. J. Thomson's plum pudding model failed to explain experimental findings of atomic structure. There was still no clear model that defined atoms, so Ernest Rutherford, a British scientist, conducted an experiment in 1909 and discovered and postulated the atomic structure of elements and the Rutherford Atomic Theory Model based on his findings.

In this experiment, a piece of a radioactive substance (radium) is placed in a lead block. Only a limited beam of alpha particles might escape since the block is designed with slits. A high-energy a-particle beam was focused on a thin gold foil (thickness of about 100 nm). A moveable circular screen coated with zinc sulphide is placed around the gold foil to detect the a-particles after scattering.

When alpha particles collide with the zinc sulphide screen, light flashes or scintillations appear, which can be observed. It was feasible to determine the proportions of the a-particles that were deflected through various angles by looking at different parts of the screen. 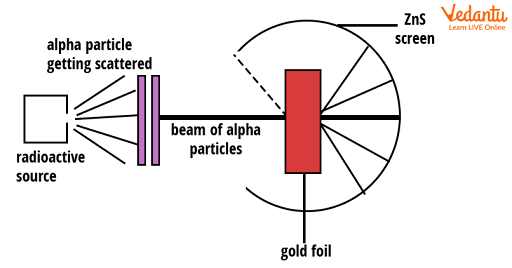 1. Rutherford's observations led him to the conclusion that: “A large proportion of the α-particles that bombarded the gold sheet passed through it without deflection”. Hence, the majority of the space in an atom is empty.

2. Only a few particles deflected back (deflection angle of 180 degrees). As a result, positively charged particles in an atom occupy a small fraction of the overall volume of the atom.

3. According to Thomson's Model, if the atom's positive charge was uniformly distributed, positively charged a-particles with a significant mass (4 a.m.u.) would pass through a weak electric field mostly undeflected or slightly deflected. He did discover that several of the a-particles had significant deflections. Some particles even resurfaced from the foil. As a result, Thomson's Model was eliminated as it couldn't explain this data.

Rutherford explained these observations as follows:

(i) As the majority of the alpha-particles passed through the gold foil undeflected, there must be a significant amount of unoccupied space within the atom.

(iii) The direct collision with the massive positively charged bulk was explained as the cause of the strong deflections or even bouncing back of alpha particles from the foil.

The nucleus is the positively charged heavy mass that occupies only a limited volume in an atom. It is thought to be present in the atom's nucleus.

Figure 1 depicts all these different sorts of alpha-particle deflections from atoms. The graphic shows that alpha-particles passing far away from the nucleus experience no deflections, those passing close to the nucleus experience small deflection and the few that hit the nucleus are either deflected to enormous angles or retrace their routes. Rutherford proposed a hypothesis for the structure of the atom termed Rutherford's Nuclear Model of Atom based on the above experiments and observations.

Let us explain the Rutherford model of an atom. The main features of this model are:

(i) The whole mass and positive charge of an atom are concentrated in the nucleus, a very small region near the centre. When compared to the whole volume of the atom, it was discovered that the nucleus occupies a negligible amount of space.

(ii) The nucleus is surrounded by negatively charged electrons that orbit the nucleus at extremely high speeds in circular routes known as ‘orbits’.

As a result, Rutherford's atom model resembles the solar system, with the nucleus acting as the sun and circulating electrons acting as planets.

(iii) The electrostatic forces of attraction hold the electrons and nuclei together.

(iv) The majority of the space between the nucleus and the rotating electrons in an atom is vacant.

Limitations of the Rutherford Model

According to the Rutherford Model, electrons circulate the nucleus in well-defined orbits. When a body moves in an orbit, it accelerates (if its speed is constant, it must be accelerated by the change in direction). In the nuclear model, an electron is accelerating.

When charged particles are accelerated, according to Maxwell's electromagnetic theory, they should create electromagnetic radiation (it is not applicable for planets because they are uncharged). As a result, an electron in an orbit will produce radiation, which is carried by energy carried by electronic motion. As a result, the orbit will continue to shorten. (Calculations show that an electron spiralling into the nucleus should take only 10-8 seconds.)

However, this does not occur. As a result, the Rutherford model fails to explain atom stability. Electrostatic attraction between the dense nucleus and the electrons would drive the electrons toward the nucleus to produce a tiny version of Thomson's model of the atom if the electrons were deemed stationary.

Furthermore, this model reveals nothing about atoms' electronic structure, how electrons are organized around the nucleus and what energies are associated with them.

1. What is the charge of an alpha particle and what is its mass?

The nuclei of some radioactive elements spontaneously release a positively charged particle. It is the same as a helium nucleus with a mass number of 4 and a positive electrostatic charge. It has short-range and low penetration power (a few centimetres in the air). Two protons and two neutrons constitute an alpha particle. As a result, whenever a nucleus emits an alpha particle, it loses two protons, decreasing its atomic number by two. They are made of heavy elements like radium, thorium, uranium and plutonium which decay radioactively.

Two new notions played a vital influence throughout the development of new models to improve the Rutherford model of an atom. These are the following:

Electromagnetic radiation has a dual behavior. This implies that light possesses both particles and wave qualities. Atomic spectra are the second type of atomic spectra. The experimental facts concerning atomic spectra can be explained only by assuming quantised (fixed) electronic energy levels in atoms.

Bohr was the first to discover that electrons move about the nucleus in different orbits and that the number of electrons in the valence shell can be used to predict an element's properties.