Metals are compounds that are mainly characterised by distinctive properties like high thermal and electrical conductivity and high reactivity.  Some metals like copper, gold, silver, etc are found in a free state. Most metals are found in the earth's crust as metal ores like oxides, sulphides, silicates, etc. Most of the metals have high malleability, ductility and strength. Sodium and potassium are soft metals that do not show these properties. Except for mercury, which is found in a liquid state, almost all other metals are found in a solid state.w

Around one-third of elements are metals. They are characterised by metallic bonding, where the valence electrons are delocalised or free to move. Due to this, most metals show high conductivity. Metals find extensive applications in automobiles, satellites, electronics, manufacturing industries, utensils, etc. because of their distinctive properties and their abundance in nature. Generally, metal atoms contain less than half the full amount of electrons in their outermost shell. Some metals like lithium and sodium are highly reactive, but noble metals like gold and silver are non-reactive. The most reactive metal in the periodic table is Cesium. The reactivity series of metals is an arrangement of metals in descending order of reactivity.

The chemical reaction of metal is based on the reactivity of metals. Most of the metals react with oxygen, water and acids. Generally, alkali metals and alkaline metals show high reactivity and react with dilute acids, oxygen and water. Let us see some examples of reactions with metals.

Reaction of Metals with Oxygen

Oxygen is a strong reactive non-metal and a powerful oxidising agent. Most of the metals react with oxygen and form metal oxide. These metal oxides are basic, with some exceptions like aluminium and zinc oxide. Some reactions are as follows:

Compounds like Na2O2, which are rich in oxygen are called ‘peroxides’.

Reaction of Metals with Water

The reaction of calcium is not that violent.

Reaction of Metals with Acid

The reaction of acid with metals is discussed below:

Reaction of Metals with Base

Some metals react with base to give corresponding salt and hydrogen gas.

Reaction of Metals with Non-metals

Some reactions between metals and nonmetals are:

And finally, anions and cations react to form NaCl.

Ionic compounds have strong electrostatic forces between oppositely charged ions. Hence, they have high melting points. Ionic compounds have free electrons in their crystal lattice which allow them to conduct electricity when molten or in an aqueous solution.

Reaction of Metals with Solution of Other Metal Salts 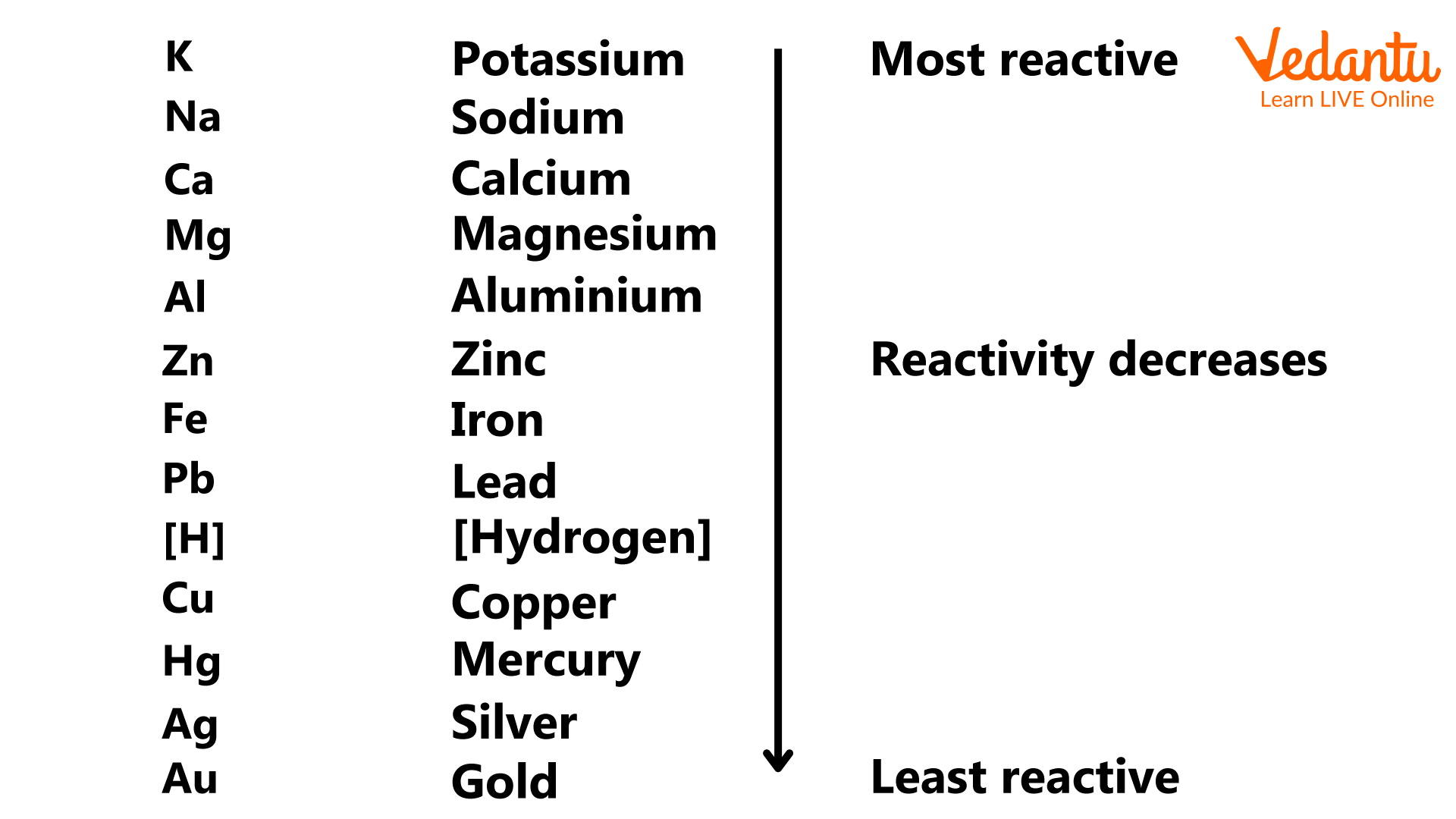 Reactivity Series of Some Common Metals

Elements are mainly divided into two groups: metals and non-metals. Most of the metals are lustrous, malleable, ductile and have high conductivity for heat and electricity. Some metals can form positive ions by losing electrons to nonmetals and they form ionic compounds. Most of the metals combine with oxygen to form basic oxides but aluminium oxide and zinc oxide are amphoteric. Based on reactivity, different metals react with water and dilute acids and form salt and hydrogen. In the reactivity series based on the reactivity, metals are arranged in order of their decreasing reactivity. A more reactive metal that is higher in the reactivity series displaces a less reactive metal from its salt solution.

1. What is an Electrochemical Cell?

Corrosion is a natural process that happens due to electrochemical reactions between materials and substances in their environment. Corrosion is the gradual destruction of pure metals by the action of air, moisture or a chemical on their surface. For example, rusting of iron. Most metals can be easily oxidised as they tend to lose electrons to oxygen in air or water. The oxygen gets reduced and forms an oxide layer on the metal surface. When reduction and oxidation take place on different kinds of metal in contact with one another, the process is called ‘galvanic corrosion’. Some materials gain natural passivity or resistance to corrosion.