Methods of Preparation of Aldehydes and Ketones for JEE

We come across many organic compounds containing a (–C=O) group in our everyday life. Biomolecules such as protein, carbohydrate, etc. that make up all plants and animals contain carbonyl groups. The members of the aldehyde ketone and carboxylic acid group play an important role in the metabolic process. For example, pyridoxal, an aldehyde derived from vitamin B, functions as a coenzyme. Carbonyl compounds are  the main constituents of fabrics, plastic, and drugs. Formaldehyde (an aldehyde), which is used for the manufacture of bakelite and paracetamol drugs (p– acetylated aminophenol), a drug used to reduce fever, contains a carbonyl group. In this unit, we will learn about the preparation, properties, and uses of aldehyde, ketone, and carboxylic acid.

Nomenclature of Aldehydes and Ketones

The carbonyl carbon ( –C=O) is sp2 hybridised and the carbon–oxygen bond is similar to carbon–carbon double bond in alkenes. The carbonyl carbon forms three σ bonds using their three sp2 hybridised orbital. One of the sigma bonds is formed with oxygen and the other two with hydrogen and carbon (in aldehydes) or with two carbons (in ketones). All the three 'σ' bonded atoms lie on the same plane as shown in image 1.

The fourth valence electron of carbon remains in its unhybridized ‘2p’ orbital which lies perpendicular to the plane and overlaps with the 2p orbital of oxygen to form a carbon–oxygen p bond. The oxygen atom evidently has two nonbonding pairs of electrons, which will occupy its remaining two p-orbitals. Oxygen, the second most electronegative atom, attracts the shared pair of electrons between the carbon and oxygen towards itself. Hence, the bond is polar. This polarisation plays a major role in the reaction of aldehydes and ketones.

Methods of Preparation of Aldehydes and Ketones

Preparation of Aldehydes and Ketones by Dehydrogenation of Alcohols

We know that generally the oxidation of primary alcohol gives aldehydes and secondary alcohol gives a ketone. Oxidising agents such as acidified Na2Cr2O7, KMnO4, and PCC are used for oxidation. Oxidation using PCC yields aldehydes. Other oxidising agents further oxidise the aldehydes / ketones into carboxylic acids. When vapours of alcohol are passed over heavy metal catalysts such as Cu and Ag, alcohols give aldehydes and ketones.

Ozonolysis of Alkenes to Form Aldehydes and Ketones

Alkenes react with ozone molecules to form ozonide, which on subsequent cleavage with zinc atoms and water give aldehydes and ketones. Zinc dust removes H2O2 formed, which otherwise can oxidise aldehydes/ketones. Terminal olefins give formaldehyde as one of the products. We know that the hydration of alkynes in presence of 40% dilute sulfuric acid and 1% HgSO4 gives the corresponding aldehydes / ketones.

(i) Hydration of Acetylene Yields Acetaldehyde

(ii) Hydration of Alkynes, Other than Acetylene gives Ketones

Aldehydes and ketones may be obtained by the dry distillation of calcium salts of carboxylic acid groups.

a) Aldehydes can be prepared when the mixture of calcium salt of carboxylic acid and calcium formate is subjected to dry distillation. b) Symmetrical ketones can be obtained by the dry distillation of the calcium salt of a member of the carboxylic acid group. Formic acid is an exception. Aldehydes can be prepared by the hydrogenation of acid chloride, in the presence of a palladium catalyst supported by barium sulphate (BaSO4). This reaction is called Rosenmund reduction. In this reaction, barium sulphate acts as a catalytic poison to palladium catalyst, so this does not lead to the conversion of aldehyde to alcohol. Formaldehyde and Keto group members cannot be prepared by this method.

When alkyl cyanides are reduced using SnCl2 /HCl , imines are formed, which on

hydrolysis give the corresponding aldehyde.

Side Chain Oxidation of Toluene and Toluene Derivatives

When we use chromyl chloride as an oxidising agent, toluene gives benzaldehyde. This reaction is called the Etard reaction. Acetic anhydride and Chromyl Chloride (CrO3) can also be used for this reaction.

This reaction is a variant of Friedel – Crafts acylation reaction. In this method, the reaction of carbon monoxide (CO) and hydrochloric acid (HCl) generates an intermediate which reacts like formyl chloride. Manufacture of Benzaldehyde From Toluene

Side chain chlorination of toluene yields benzal chloride, which when hydrolysed gives the compound benzaldehyde. This is the commercial method that is used for the manufacture of benzaldehyde.

Image 11: Manufacture of Benzaldehyde from Toluene

Ketones can be prepared by the reaction between acid chloride with dialkyl cadmium. 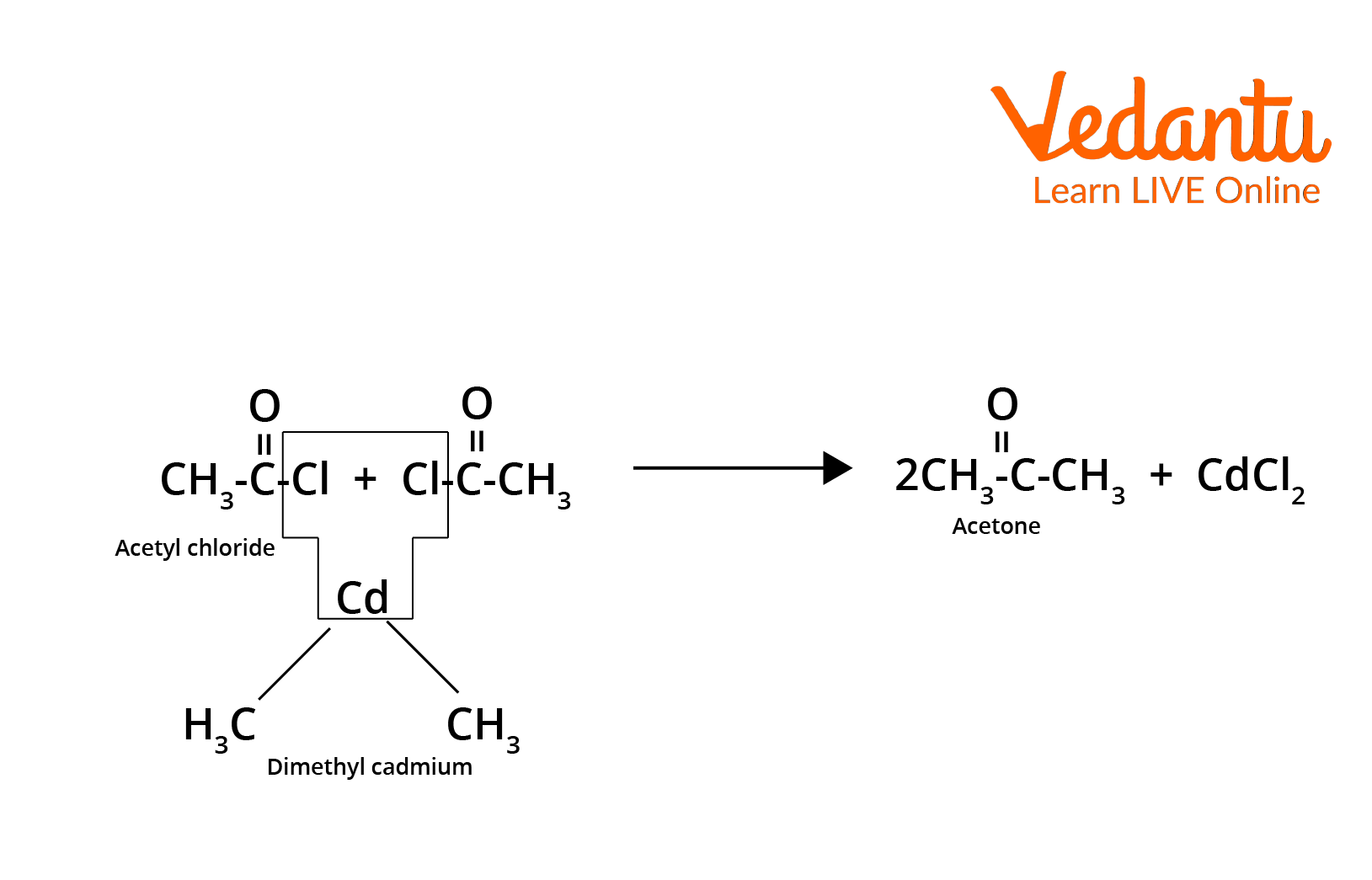 The Friedel Crafts Acylation is the best method ever known for preparing alkyl aryl ketones or diaryl ketones. The success of this reaction can only be seen with benzene and activated benzene derivatives. 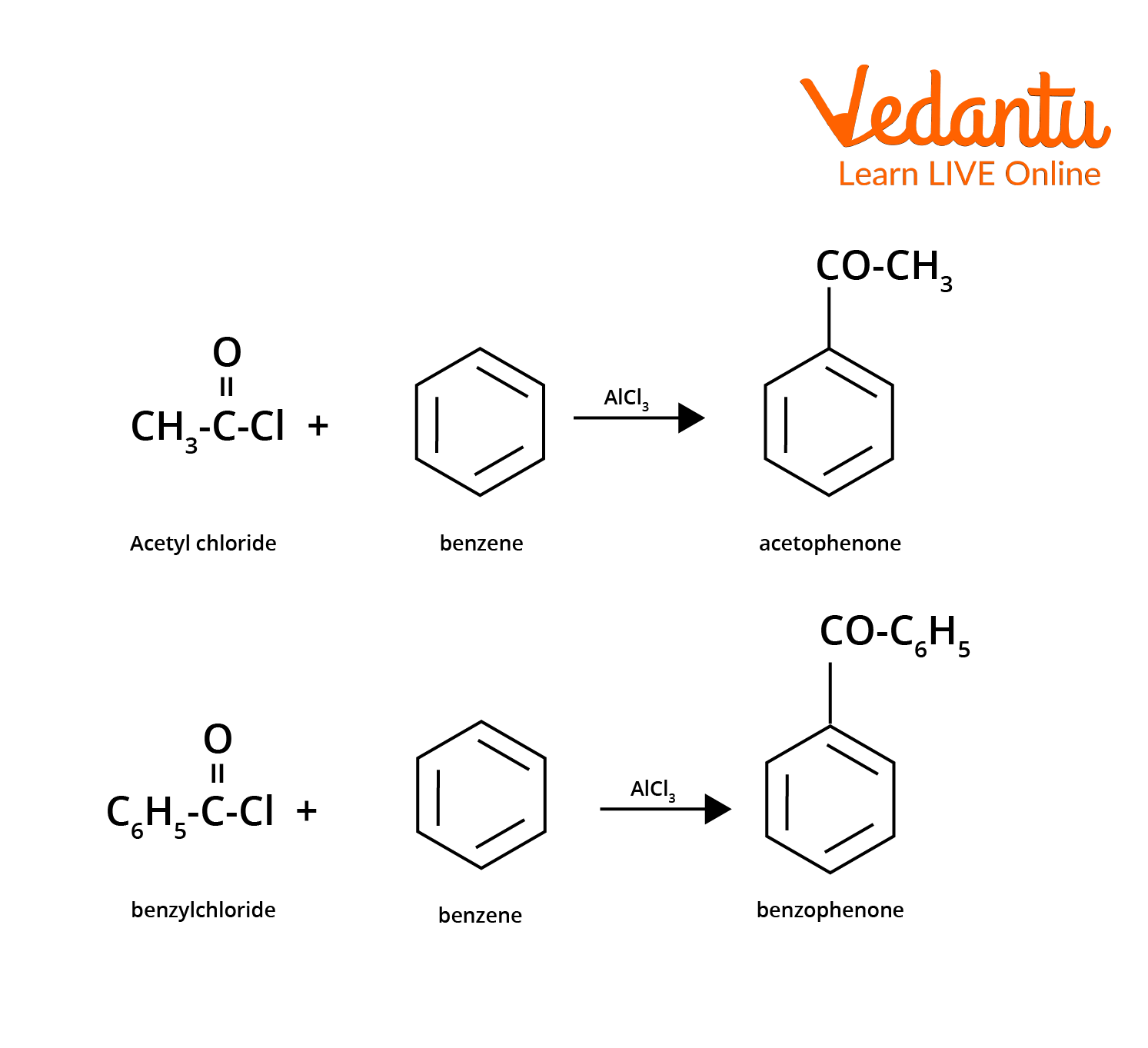 The carbonyl compounds containing the (–C=O) are generally called aldehydes and ketones. Aldehydes and ketones can be prepared by many methods like oxidation and catalytic dehydrogenation of alcohols, ozonolysis of alkenes, Gattermann – Koch reaction, Friedel – Crafts acylation, etc. 40% of the aqueous solution of formaldehyde is termed as formalin. We studied the preparation reactions of aldehydes and ketones. It can be used for preserving the biological specimens. Paraldehyde is used in medicine as a hypnotic while acetaldehyde is used for silvering of mirrors. We can use acetone as a nail polish remover. Benzophenone is used in perfumery and in the preparation of benzhydrol, which is an eye drop.

FAQs on Methods of Preparation of Aldehydes and Ketones for JEE

1. Explain the tests to identify the presence of aldehyde groups.

Tollens reagent is an ammoniacal silver nitrate solution. When an aldehyde is warmed with the Tollens reagent, a bright silver mirror is formed due to the formation of silver metal in the test tube. This reaction is also called the silver mirror test for aldehydes.

2. Explain the oxidation of ketones.

Ketones are not easily oxidised. Under drastic conditions or with powerful oxidising agents like Conc.HNO3, H+/KMnO4, H+/K2Cr2O7, cleavage of carbon-carbon bond takes place to give a mixture of carboxylic acids with less number of carbon atom than the parent ketone.