An Introduction to Lattice Energy

In an ionic compound, the strength of the ionic bond between two oppositely charged ions depends mainly on the charge of ions and the distance between the ions when they are in a crystal form. An approximate estimate of the strength of ionic bonds can be obtained by calculating lattice energy. Lattice energy is the energy change accompanied when oppositely charged ions in the gas phase come together and form crystalline ionic solids. As it is difficult to isolate gaseous ions, the experimental determination of lattice energy is difficult. However, it can be estimated by using the Born-Haber cycle.

As mentioned, lattice energy is defined as the heat of formation accompanied when 1 mole of crystalline ionic solid is formed from its constituent ions which are in their gaseous state. For example, the lattice energy of NaCl is the energy change of reaction when sodium and chlorine ions react to form NaCl crystal and is equal to -786 $\dfrac{kJ}{mol}$.

We can define lattice enthalpy as

U = The amount of energy required to dissociate 1 mol of an ionic solid into the gaseous ions. It is a positive number

Q1 and Q2= The charges on the ions

$\Delta V_{m}=$ Change in molar volume due to formation of the lattice.

Energy is the state of a system and it is energy associated with the molecular configuration and motion of molecules constituting the system. Enthalpy can be referred to as the total heat content of a system. Enthalpy change is an energy change between two states of a particular system or heat added or removed when a chemical change happens.

How to Calculate Lattice Energy?

Lattice energy can be calculated from the Born-Lande equation which is derived from the electric potential of the ionic lattice and repulsive potential energy. It is given by

Z+ = Charge number of the cation

Z- = Charge number of the anion

The standard atomisation enthalpy is the enthalpy change accompanied when 1 mole of gaseous atoms is formed from the element in its standard state and is always positive. This is because we need to supply energy to divide an element into its separate gaseous atoms. An understanding of the following concepts is required to calculate the lattice energy

The following are the steps in the Born-Haber cycle

This is the standard lattice enthalpy of NaCl. 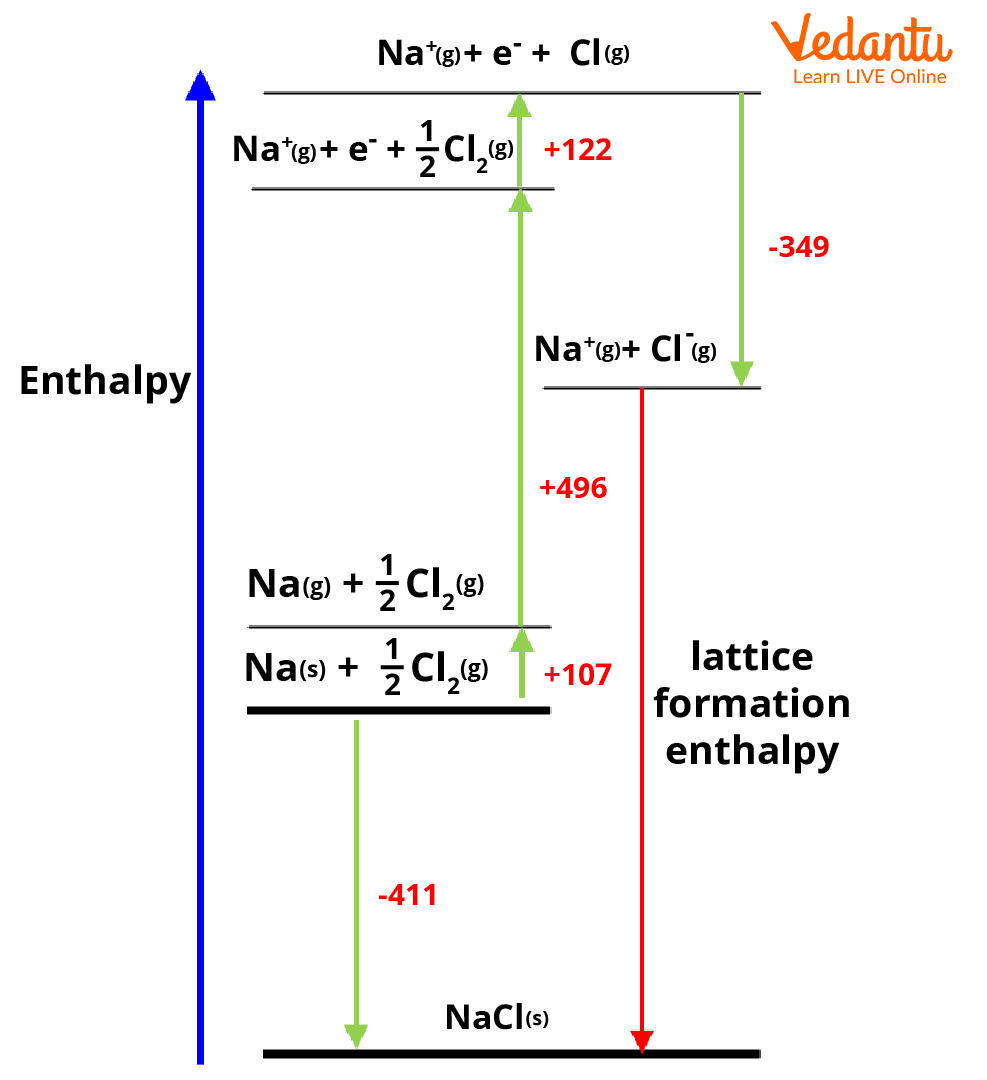 The factors affecting lattice energy are as follows:

The Charges on the Ions

The ionic bond is formed due to the electrostatic force of attraction between the opposite ions. Hence, the bond should be stronger as the charge on the ions becomes larger. This means lattice energies will be more if the charge on the ion becomes larger. Consider the lattice energy example of barium oxide (BaO) and NaCl, both have similar crystal structures and therefore have the same Madelung constant. The lattice enthalpy of BaO is  −3054 $\dfrac{kJ}{mol}$ which is very much higher than that of sodium chloride (lattice enthalpy of NaCl = −786 $\dfrac{kJ}{mol}$). This is because BaO has charge numbers of (+2,−2) which are higher than NaCl charge numbers (+1,−1). According to the Born–Lande equation, the difference in charge numbers is the principal reason for the large difference in lattice energies.

The Radius of the Ions

The lattice energy can be measured by a theoretical estimate by the Born-Lande equation or by the Born-Haber cycle which uses experimental enthalpy values. The main factors affecting lattice energy are the charge of the constituent ions and the size of ionic radii.

1. What is the relation between lattice energy and solubility? Explain

Lattice energies can be used to predict compound solubilities. The Born-Haber cycle for dissolving a salt in water is the sum of two processes: 1.  the vaporisation of the salt to give gaseous ions, which is characterised by the lattice enthalpy and 2. the hydration of those gaseous ions to make the solution. The total enthalpy change for the process is the sum of those two steps.

2. What is the Hess's Law of Constant Heat Summation?

Hess's law states that the enthalpy change during a chemical reaction is the same whether the reaction takes place in one step or multiple steps, provided that the initial and final states of the reactants and products are the same as the main reaction. This law is derived on the basis that  enthalpy of a chemical process is independent of the path taken from the initial to the final state. This means enthalpy is a state function.