What is Inductive Effect?

A partial shift/displacement of electrons towards a more electronegative atom of a bond is known as the inductive effect. This means single bond electrons shift towards an atom with a higher electronegativity value. The associated negative or positive charge is conveyed across the carbon chain by the atoms belonging to it when an electron-releasing or electron-withdrawing species is introduced to a chain of atoms (usually a carbon chain).

The inductive effect is the formation of a permanent dipole in the molecule as a consequence of EDG or EWG. When a covalent connection is formed between atoms with different electronegativity, the electron density shifts towards the more electronegative atoms.

Example of an inductive effect is:

The distance between the substituted group and the primary group that reacts affects the strength of the inductive action. The longer the distance, the weaker the impact. 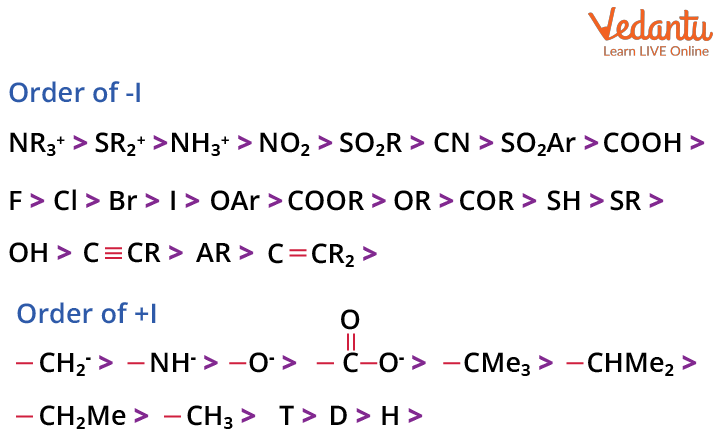 Acidic strength is a measurement of an acid's ability to lose its H+ ion. A strong acid's dissociation in solution is nearly complete. Powerful acids include hydrochloric acid, perchloric acid, nitric acid, and sulfuric acid.

A weak acid partially dissociates in the presence of both the undissociated acid and its dissociation products in the solution. Take acetic acid for example. A weak organic acid's strength is determined by substituent effects. As a result, evaluating the relative strength of substituents attached by the inductive effect order can be used to predict the order of acidic strength.

How to Determine Acidic Strength?

Acidic molecules contain structural characteristics that allow the conjugate base anion to delocalize its charge over a larger area. The molecule is more stable when the negative charge is delocalized. The electronegativity, hybridization, and size of the atom on which the negative charge is placed, the electron-withdrawing actions of nearby electronegative atoms, and resonance effects are the most critical features that stabilise negative charges. Hence, by estimating the stability of a conjugate base formed, we can estimate and compare the acidic strength of an organic compound.

Image: Effect of EWG and EDG on Carboxylic Acid

FAQs on Inductive Effect and Acidic Strength - Types, Relation and Applications for JEE

1. What are resonance structures?

A group of two or more Lewis structures that collectively represent the electronic bonding of a single polyatomic species, including fractional bonds and fractional charges, is known as a resonance structure.