Fluid Pressure and Its Properties

The pressure at a point inside the fluid due to the fluid’s weight is referred to as liquid pressure or pressure in a fluid. This pressure might increase with a change in the fluid’s velocity or any hydraulic mechanism. Fluid pressure can also be defined as the force applied per unit area acting on an object placed inside a fluid or on the surface of a container.  The pressure applied by a fluid or a liquid is in all directions as liquids do not have a definite shape.  Let us discuss a few more concepts of liquid pressure.

What is Meant by Fluid?

Anything that flows and easily deforms its shape under the influence of stress or an external force are termed as fluids. Therefore, fluids do not have a definite shape and take the shape of the container that they are placed in. Liquids and gases in general are termed as fluids. These can be classified into different types like compressible fluid, real fluid, ideal fluid, newtonian fluid, non-newtonian fluid, and so on. 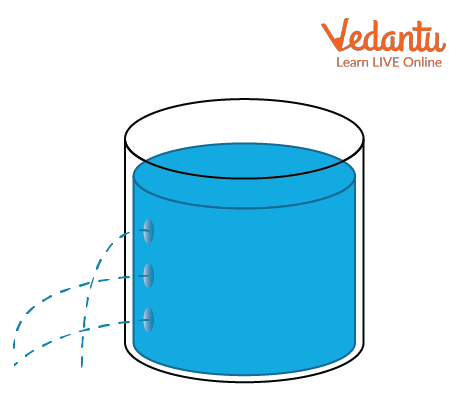 The image above shows a container filled with fluid which is punctured with holes at three levels. The fluid oozes out of the top hole with the least pressure as it covers less area, whereas the fluid from the last hole oozes with the maximum pressure due to the pressure applied by the fluid above it. 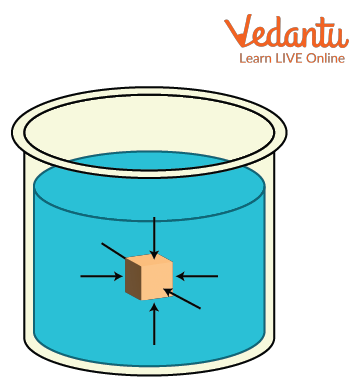 Pressure on a Object Inside a Liquid Filled Container

At a given depth the pressure in a fluid is the same in all directions. Refer to the image below that depicts an object placed at a certain depth of a container filled with a fluid. As at a given depth pressure is the same in all directions therefore the molecules of fluid or liquid direct an equal pressure on the object. If the pressure were not to be equal the liquid or fluid would have flowed. 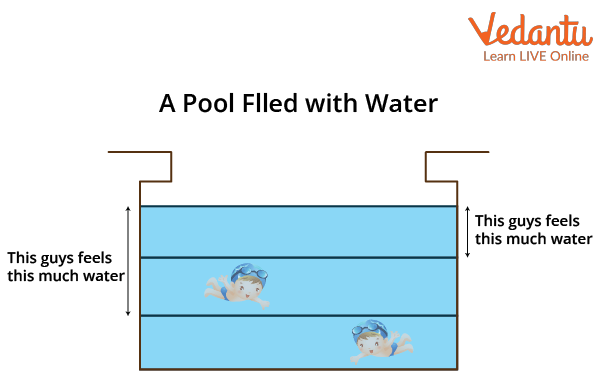 A man in the pool experiences different liquid/fluid pressure at different points due to the pressure of the fluid acting above it. At the depth of the pool the man experiences the highest pressure.

Where F is a constant force being applied on a surface area A.

$\rho$ is the fluid density which can be calculated as the ratio of mass of fluid to volume of the fluid. It can be denoted as $\rho=\dfrac{m}{V}$

Example 2: Calculate the pressure exerted on a scuba driver which is at 14 metres below the surface of the ocean. Assume standard atmospheric pressure.

Some of the properties of liquid pressure include:

Method to Find the Centre of Pressure

The centre of pressure can be said as the point where the force acting on the surface of an object produces the same effect as the continuous distribution of forces on the surface in the liquid.

1. Which device is used to measure pressure in a liquid /fluid?

2. What are the types of Fluid pressure?