Causes and Effects of Unemployment

Unemployed people are more likely to face a variety of challenges, including difficulty finding future employment and lower income. Unemployment has an impact on the economy and society as a whole. The longer a person is unemployed, the more likely they are to suffer negative consequences and contribute to the multiplier effect that unemployment has on the community.

In this piece, we look at what it means to be unemployed and how it affects people, society, and the economy. Furthermore, even if they expect to be hired again for the same position, people who are temporarily laid off are still considered unemployed. Let us know more about it in this article.

When a person is actively engaged in a job, business, trade, or profession, they are considered to be employed. Unemployed people are those who are actively looking for work but are currently unemployed. Every government's macroeconomic goal is to keep the unemployment rate low and solve the problem of unemployment. Full employment occurs when every worker is employed. The unemployment rate is 0%, which means that everyone who is able and willing to work is working. 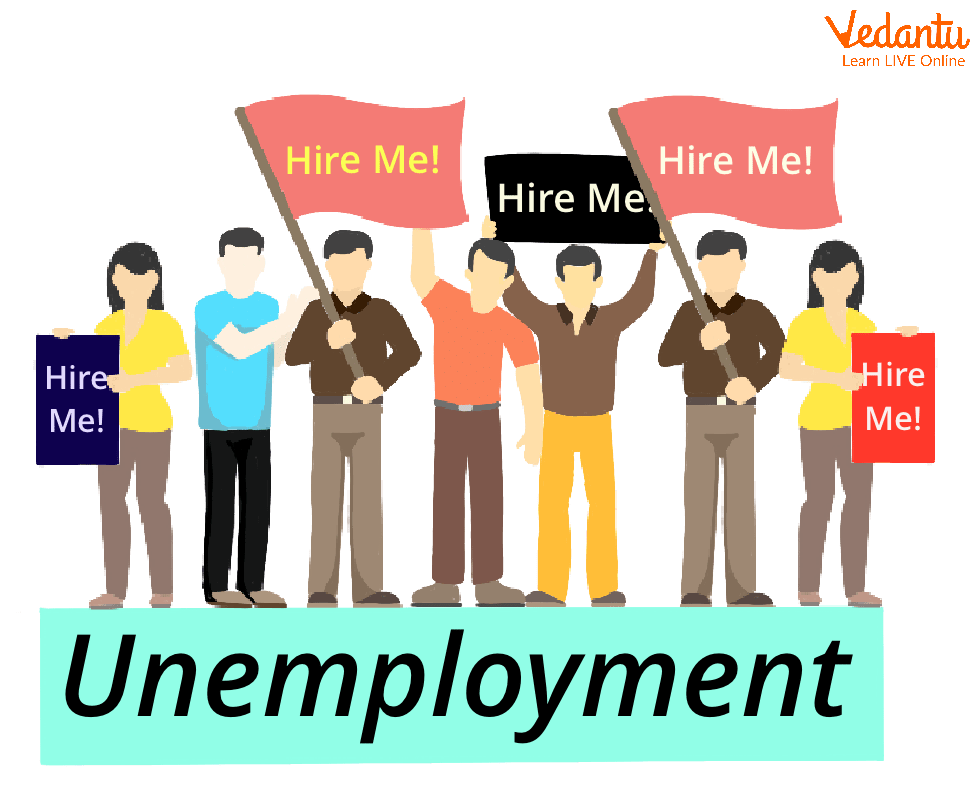 Unemployed people can face a variety of challenges. There has been a difference between everyone and everybody. The longer someone is out of work, the more difficult these issues become. Individual consequences of unemployment include the following:

Unemployed people's income is reduced as a direct result of their inability to find work. Because wages are earned through employment, losing one reduces a person's available income.

Given how stressful being unemployed is, it's possible that it will lead to stress-related health problems like headaches, high blood pressure, diabetes, heart disease, back pain, and sleeplessness. These health problems frequently lead to more frequent doctor visits and more frequent usage of medications to treat the underlying diseases.

3. Negative Effects on the Family

The family of an unemployed person is also vulnerable to the negative effects of unemployment. Unemployed people face more challenges in their families and are less satisfied with their marriages and families, according to the Society for the Psychological Study of Social Issues. 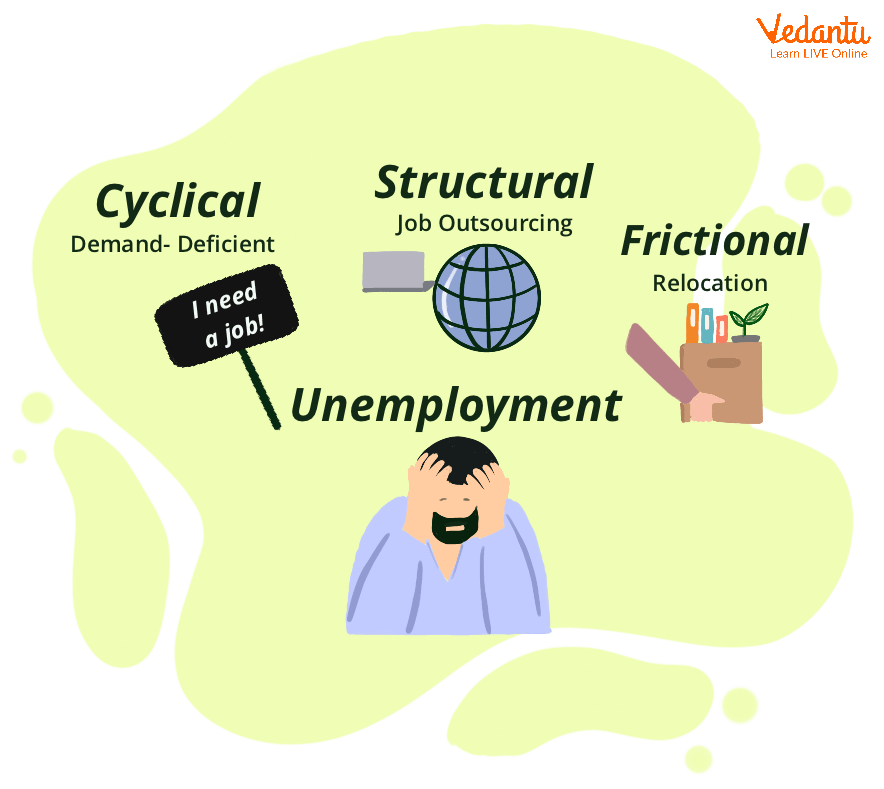 1. The Productivity-Wage Gap is Widening

In the country, inflation is still present, causing prices to rise. As a result, labourers demand higher pay and benefits, raising the cost and price of commodities while decreasing demand. This follows a period of declining output and, as a result, growing unemployment.

Despite scientific advances, agriculture in India is still depending on the whims of nature. Every year, millions of workers are forced to quit their jobs due to droughts, floods, and other natural disasters, causing agricultural uncertainty and unemployment.

There has never been a comprehensive or urgent employment programme in India. It is true that the problem of unemployment cannot be solved unless a strong employment-oriented development policy is formulated and implemented by the country's stable administration.

One of the key issues is the country’s educated population’s need for a job. They do not want to set up any startup or separate manufacturing facility. This negative attitude has increased unemployment as well.

Besides these, unemployment is worsening due to difficulties in the manufacturing process, the social environment, societal ills, religious superstitions, political uncertainty, and industrial unrest.

The Indian subcontinent faces Unemployment, both involuntary and voluntary, which can be examined under two broad categories, in relation to one another.

A majority of the Indian population resides in rural areas and thrive on agriculture as a primary means of livelihood. But this agrarian industry does not make up for adequate Employment for the entire population living in these areas. This leads to rural Unemployment which can be categorised into three major types, as have been discussed below.

In India, the downturn is systemic. To put it another way, economic output is insufficient to provide enough jobs. This has been going on for a while.

One of the most basic Unemployment situations is when an unemployed individual, seeking and available for work, is unable to get a job with a regular payment. This is termed open Unemployment. A major reason for this type of Unemployment is a rapidly expanding labour force in an economy with a slower growth rate. When it comes to open redundancy, identifying those who are unemployed is a simple task. Agriculture is a short-term occupation in India, and there is usually a high need for labour during sowing, weddings, and harvesting, but demand for labour drops significantly during the slack season.

The duration of periodic Unemployment in India varies by state, based on farming practices, soil type, and the potential of multiple cropping. Farmers in rainy agriculture are unemployed for four to six months per year. They are unable to find an alternative job at this time due to their illiteracy, poverty, and bad health.

This type of Unemployment is particularly rampant in the agricultural industry, contributing as the most common form of rural Unemployment in India. It presents a circumstance in which more individuals are engaged in a work than what is required due to lack of alternative job opportunities. This indicates that the removal of some of the workforce would not make a major difference in the production of a farm; that is, this surplus manpower has negligible to zero marginal productivity. The disguisedly impoverished are individuals who work for themselves and are overly numerous in relation to the resources with which they work, such that if a number of them were to be reassigned to other sectors of the country, the total output of the sector from which they were reassigned would not be affected, even if no significant reorganization took place. Another important cause of uncertainty is the high rate of Unemployment among educated rural youth. The growth of education has resulted in a large number of unemployed young people looking for work. However, they are unable to find work in the labour market. Unemployment of this nature has devastating implications. It causes some people to be frustrated and others to be dissatisfied.

This type of Unemployment is seen with people working in industries with seasonal production. Industries like agriculture only need additional laborers for particular times of the year, for instance, harvest season. In such cases, these specific workers remain unemployed during the rest of the year, giving rise to Unemployment in rural areas.

With rapid immigration and a population boom, India has seen remarkable growth in urban Unemployment in recent years. These can be further categorised into three types.

This is the most commonly observed type of urban Employment due to an increasing rate of migration of workers from rural to urban areas. Every year, thousands of illiterate individuals travel to more developed areas in search of jobs of menial labour in production units and factories. Due to high demand, most of them suffer from industrial Unemployment meaning their inability to secure such jobs.

Referred to as educated Unemployment, this is probably the most disappointing type of Unemployment. Structural Unemployment arises when an educated individual fails to find a job matching their qualifications. This occurs due to a lack of adequate job opportunities in concerned fields compared to the number of learned individuals.

Rapid advancement in technology is leading to Unemployment of individuals who fail to match or adapt to required skills and, thus, become obsolete for the industry. This is mostly seen in employees belonging to the retiring age group.

Following is a list of some of the most common causes of Unemployment in India.

Elevated enterprises account for a considerable amount of new jobs created, as measured by Employment expansion rates, and are important contributors to the country's economic growth. Small and medium-sized businesses (SMEs) create more net jobs than larger corporations. SMEs are key Employment producers, according to much research. According to these findings, job creation and job contraction occur hand in hand in all countries. It is common to see some companies shed employees while others gain, and some of them exhibit a considerable increase in the labour force, even in the same industry or market.

The World Bank Group's commitment to entrepreneurship development as a major aspect of its tool for enhancing economic growth, Employment, and poverty alleviation in various countries is established in the World Bank Group's evaluation on small company activities (World Bank Review, 2001). The importance of SMEs in long-term global and regional economic recovery is increasingly becoming more widely recognised.

However, due to a lack of data, very little research has been done in this area. Small and medium-sized enterprises (SMEs) play a vital role in a country's industrial growth since they create more gainful Employment, utilise fewer resources, generate more money, and reduce poverty. It's plausible to assume that if SMEs had been given more weight in industrial development, prior patterns of disastrous economic development may have been averted. However, the significant role in a country's economic progress is seldom fully appreciated. As a result of the relevance and contribution of SMEs to economic activity, there is a substantial opportunity to boost their growth by increasing their operational efficiency.

Discuss in detail the case of how has the covid-19 Pandemic affected employment in our country where a lot of its population is already unemployed.

Ans: The pandemic has significantly worsened India's jobless situation, which is not surprising. The Indian economy has struggled to escape the grip of unemployment since all economic activity ceased in March 2020.

To understand how serious the situation is, consider that India's unemployment rate in 2018 was only 6.1 per cent. Before the pandemic, India's economy was already contracting; the lockdown exacerbated the situation.

It is unfortunate that so many intelligent, qualified people are unable to find work due to a lack of job opportunities. Today's large, prosperous corporations simply want to hire the best of the best.

A large corporation will not hire people who are unsure of what to do in a professional setting. Unemployed people frequently experience sadness and depression, so if you have a family member or friend who is unemployed, make sure you are available to them during their time of need and self-doubt.

FAQs on Causes and Effects of Unemployment

1. What are the Consequences of Unemployment?

Rural Unemployment has important repercussions for rural life, even though its effects are less visible than those of urban Unemployment.

2. How does migration affect the lives of people?

Migration has a tremendous influence on the social and familial spheres. The joint family structure is rapidly disintegrating, resulting in the emergence of the nuclear family system.

3. What are the Key Sources of Official Information on India’s Employment?

There are three most relevant sources for official data and statistics on the country’s employment. These are:

4. What is the Definition of Harmonised Unemployment Rates?

5. What Do You Understand about the Unemployment Trap?

The unemployment trap or poverty trap refers to circumstances in which unemployment welfare systems put off unemployed individuals from joining the job industry. In such situations, individuals benefiting from unemployment feel that entering an average-paying work will not bring any significant improvement in their standard of living. The additional cost of going to work, along with the liability of paying taxes, adds to more losses than returns which urge these individuals to continue with their status of unemployment.