Government is a structure governing an arranged community and usually comprises legislature, executive, and judiciary. Government policy is an announcement of government political activities, schemes, and targets relating to a particular purpose. Free markets are often assumed to have a minute to no government intervention. However, governments intercede to stabilise markets, synchronise transactions, set up institutional frameworks, and impose contract law and property rights regulations. When markets break down, governments can intervene with bailouts and other measures.

Governments have the position to make extensive changes to monetary and fiscal policy, raising or lowering interest rates, which has an enormous impact on business. They can uplift the currency, which temporarily raises corporate profits and share prices but eventually lowers values and penetrates interest rates. Governments can intercede when corporations or entire segments of the economy lack or threaten to erode the whole economic system by providing rescue.

Governments can make subsidies, taxing the general and giving the money to an industry, or tariffs, adding taxes to foreign products to raise prices and make domestic products more alluring. Higher taxes, fees, and greater regulations can impede businesses or entire industries.

Government policies carry the rationale for things to be finished in a definite way and the cause for doing in that direction. Public problems can occur in limitless ways and require non-identical policy responses.

Governments put in place many policies that lead the way to businesses. The government can amend the fiscal policy, which provokes changes in taxes, commerce, subsidies, regulations, interest rates, licensing, and more. Businesses should be supple enough to respond to changing rules and policies.

Government policies are material at all levels, from national to local levels, such as states and municipalities. These local authorities have their own sets of laws. There are some international treaties which can shape the way corporations do business.

Governments get revenue to disburse from the taxes. Increased disbursement requires increases in taxes or borrowing. Any tax increase will dishearten investment, especially among business people who take the chance of starting and managing businesses. Increased expenses also eat into the limited pool of funds, leaving less money for private investment.

The government policy can affect how much tax the section pays, pensions, relocation status and laws, penalties or fines for violation of rules, education system, business and trade in an economy. 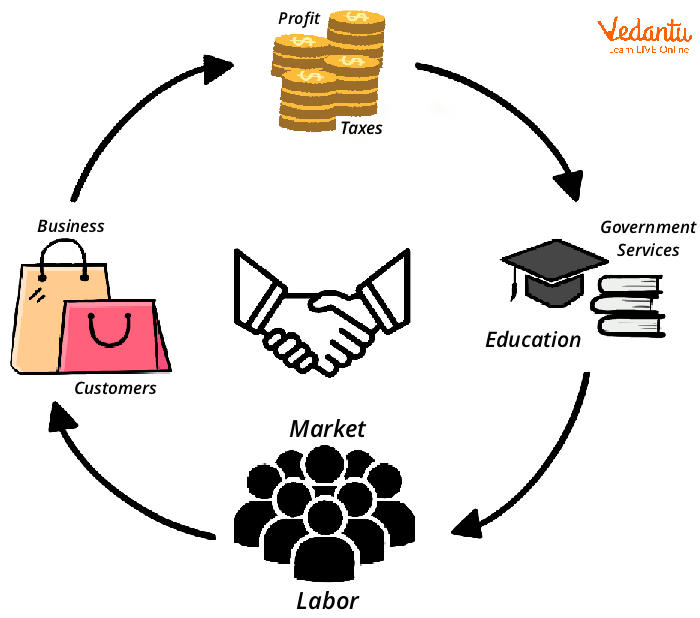 Role of Government in Business

The government executes a policy that changes social behaviour in the business environment. The government can penetrate agreements to evolve new technology to bring the required change. A decrease in private investments reduces the production of goods and services. That, as a result, may lead to unemployment.

Government policy can affect interest rates, which increases borrowing costs. Higher rates will lead to reduced consumer spending, but lower interest rates attract investments as businesses increase production. Businesses can not prosper when there is a high rate of inflation.

Government Intervention in the Economy

Government intervention refers to government involvement in the marketplace. Demand and supply forces in the free market often cannot establish allocative and productive efficiency. On this occasion, the government decides to step up and intervene.

The government takes this regulatory step to try and overcome market failure. It aims to replace the decisions made by individuals, groups, and organisations about social and economic matters. 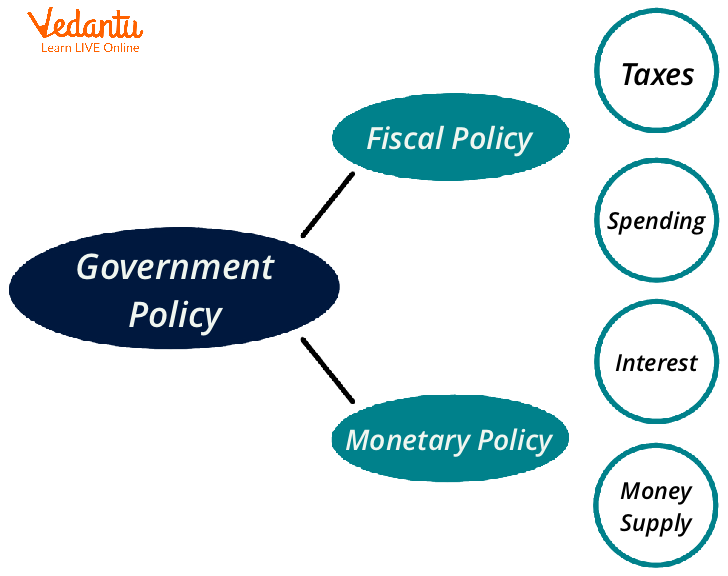 When policymakers look to influence the economy, they have two main tools: monetary policy and fiscal policy. Central banks indirectly aim at activity by impacting the money supply through adjustments to interest rates, the buying and selling of government securities, bank reserve requirements, and foreign exchange. Governments impact the economy by changing the level and types of taxes, the extent and composition of investment, and the degree and form of borrowing.

Governments influence directly and indirectly the way resources are used in the economy. A basic equation of national income accounting that calculates the output of an economy or gross domestic product(GDP), according to spending, is given below:

GDP is the value of all the final goods and services manufactured in the economy. On the right side, there are the sources of aggregate expenditure or demand - private consumption (C), private investment (I), goods and services purchased by the government (G), and exports fewer imports (i.e., net exports, NX). This equation makes it clear that governments affect economic activity (GDP) through their policies, controlling G directly and impacting C, I, and NX indirectly. Fiscal policy is called expansionary or “loose” if it increases aggregate demand directly through an increase in government spending. By contrast, if fiscal policy reduces demand via lower spending, it is often considered contractionary or “tight.”

Role of Government in an Economy

In an economy, the government plays a very critical role.

The government provides the legal framework and services required for a market economy to operate effectively and efficiently. The legal framework lays out the legal status of business enterprises, certain the rights of private ownership, and allows the drafting and enforcement of contracts. Government interference is presumed to improve the allocation of resources.

Competition is the basic regulatory tool in the market system. When businesses face competition in the market for customers, it results in lower prices, high-quality goods at reasonable prices, and more innovation.

Redistribution assumes both benefits and costs. The proposed benefits are greater “fairness”; the proposed costs are fewer incentives to work, save, invest, and produce, which results in a loss of total output and income. The government uses the personal income tax to take a larger amount of the income of the rich than of the poor, thus reducing the after-tax income difference between high-income and low-income earners. Redistribution involves taxes and giving them back through services, public goods, social security, aid for the disabled etc.

The government reallocates the resources through its budgetary policy to meet social and economic objectives. Private companies do not produce public goods like roads, bridges, parks etc. The government, to maximise social welfare, produces goods for public needs by allocating its resources.

In Agra, the government subsidises the construction of sports stadiums to hold onto sports teams. Write an argument for this government action, using the economic functions of the government in support of your answer.

Ans: Public support for sports stadiums might be regarded as an example of correcting for externalities. The economic argument for taxpayer-financed subsidisation is that the sports teams provide substantial external benefits. The city achieves visibility that might allure new businesses and visitors who will spend money in the city. Thus, many people benefit, including those who never attend stadium events.

Governments play an important role in the financial world. Regulations, subsidies, and taxes can have immediate, long-lasting impacts on companies. For this reason, legal and political risk is considered a notable factor when pricing stocks. A good investment can turn out to be not that efficient if it's at risk of seeing its competitive advantage and profits diminish as a result of certain government actions. Political factors play an important role before going into any business.

1. What are the reasons for government intervention in the market?

No real model of a society run in the non-appearance of government intervention exists. There must be some state safety of property rights and payout on national defence. Inequality can be created in a free market economy, not from ability and handwork but from privilege and monopoly power. Without government intervention, corporations can exploit monopoly power to reward low wages to workers and charge high prices to customers. Governments intervene in the free market for the following reasons:

2. What is the role of government in markets according to conservatism?

3. What do you mean by the free market economy? Give any two examples.

A free market economy is one without government intervention. Free markets are usually featured by the absence of tariffs, taxes, quotas, regulations, subsidies, and other government restrictions. In today’s world, free markets tend not to exist as most governments exercise significant influence in the economy. Singapore is an example of a free-market economy, where Individuals are permitted to transport up to $30,000 in Singaporean dollars without event. Hong Kong is another example of the free market that we see today.