Electronic configuration is defined as the distribution of the electrons of an atom into its orbitals according to the rules. This distribution is fixed for every element. Every element has a definite number of protons which its atomic number. The number of electrons is same as the number of protons in an atom. Therefore, we can say that in its neutral state, the atomic number of the element is equal to the number of electrons. The atomic number is the characteristic feature of an atom. The unique distribution of electrons along atomic orbitals is responsible for the element’s specific chemical and physical properties. Therefore, it’s very important to know and study the electronic configuration of all elements.
In order to understand the electronic configuration of elements; it’s important to have a basic understanding of the shells, subshells and orbitals. Filling of the electrons/distribution of the electrons occurs in the atomic orbitals. Different subshells have different number of orbitals. And each shell has a different number of subshells.
Every shell is designated a value which is basically the Principal Quantum number, ‘n’. So, for the 1st shell n=1, for the 2nd shell n=2, for the 3rd shell n=3 and so on.
n = 1 2 3 4…
Shell = K L M N…
The number of subshells in a shell is equal to the value of its principal quantum number and each subshell is designated a value which is called the Azimuthal Quantum number, ‘l’. For instance, for the 1st shell, n=1, so the number of possible subshell is just 1 and the value for ‘l’ is 0. For the 2nd shell, n=2, so the number of subshells are 2 and the value for ‘l’ are 0 and 1. Similarly, it goes further. For every value of ‘l’ we have a corresponding symbol such as:
Value of l = 0 1 2 3 4…
Symbol/notation for sub shell= s p d f g…

So, the notation for different sub shells goes in this way:

Subshells can have just one orientation or more than one orientation along the coordinate axis in which the electron density can be found and these 3-D spaces around which the probability of finding an electron is maximum is said to be an orbital. In simple words, one subshell can be thought to have just one orbital or more than one orbitals for the filling of the electrons. The number of orbitals depends on the value of ‘l’ and each orbital can accommodate a maximum of 2 electrons.
Number of orbitals for a given subshell is equal to: 2l+1. So, in case of 1s (2*0+1=1, 1 orbital only) the subshell itself acts as orbital. Similarly, for 2s, there’s just one orbital and the subshell itself acts as orbital. For 2p, the possible number of orbitals is 3 (2*1+1=3) which are 2px, 2py, 2pz, so the 2p subshell has possible orientations in which electrons can be accommodated i.e. 2p subshell has 3 orbitals and so on.
And as stated earlier, each orbital can accommodate a maximum of 2 electrons. So, 1s can accommodate 2 electrons, 2s can accommodate 2 electrons, 2p can accommodate 6 electrons (3 orbitals*2 electrons each= 6 electrons) and so on.
And filling of the electrons for writing the electronic configuration of the elements is done according to the Aufbau rule, Pauli’s exclusion principle and Hund’s rule.
Aufbau rule states that the order of filling various subshells by means of increasing order of energy levels using (n+1) rule. The order of the filling of the orbitals is as follows according to the Aufbau rule/principle:
1s,2s,2p,3s,3p,4s,3d,4p,5s,4d,5p,4f,5d,6p,7s… 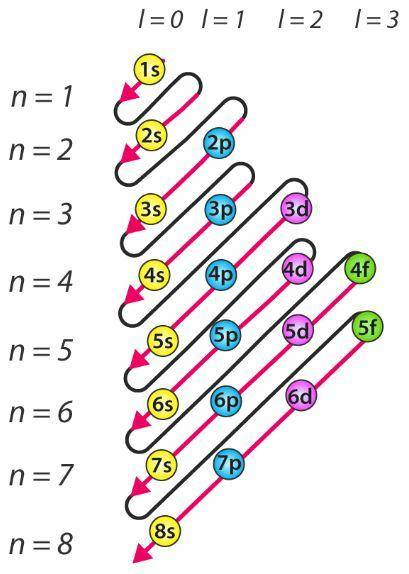