VIEW MORE
Introduction
Forests are important for the survival for all living beings. They are vital for our life as they provide oxygen, food, shelter, fuel and means of livelihood for the tribal people living in and around the forest area. Forests are home to 80% of the global terrestrial biodiversity and is the source that fulfills all basic needs for adjacent human settlements. Everything from the oxygen we breathe to the wood used from fuel to use in construction comes from forests. It is a self-nourishing system, which is a host to a number of organisms. The ecosystem of every forest includes both biotic (living) and non-biotic components. The biotic components include plants, trees, shrubs, vines, grasses, mosses, algae, fungi, insects, mammals, birds, reptiles, amphibians, and microorganisms.
Forests are made of four main layers as shown below.
Emergent Layer
The tallest trees in the forest which are around 200 feet form the emergent layer. These trees have broad leaves and get abundant sunlight.
Canopy Layer
Canopy layer is just below the emergent layer. It is thickened by a maze of smooth oval leaves and branches. It is the primary layer of the forest.
Understory Layer
Sunlight cannot reach the layers below the canopy layer and hence the plants develop larger leaves to absorb it.
Forest Floor
Sunlight cannot reach the forest floor and hence it is dark and humid in this layer. It offers a rich source for the growth of fungus. Dead leaves, branches and dead animals’ decay in this layer.
There are three major forest zones based on the distance from the equator, which are the i) tropical, ii) temperate and iii) boreal forests. Tropic rainforests have different subcategories as follows:

Trees are the world’s largest storehouses of carbon which is important to maintain global temperatures. The rise in carbon levels is believed to be the main reason behind global warming. In spite of the advantages of forests, deforestation has become very rampant in the modern era causing several problems like pollution, soil erosion, and climate change. Here are some of the reasons that explain the importance of forests for all living beings (See figure 1) and why they should be preserved proactively.
What is the importance of forests?
Forests are natural habitat to many animals. The trees supply oxygen to the atmosphere. They affect the rainfall in a particular region. They also provide us wood, medicines, food, perfumes, paper, clothes etc.
Uses of trees to absorb greenhouse gases

Forests maintain the ecosystem by absorbing greenhouse gasses like carbon dioxide that are believed to be the reason for climate change. Carbon is stored in the biomass within the forests. Tropical forests alone harbor a huge amount of carbon (around a quarter of a trillion tons) that can be disastrous if it is released into the atmosphere. 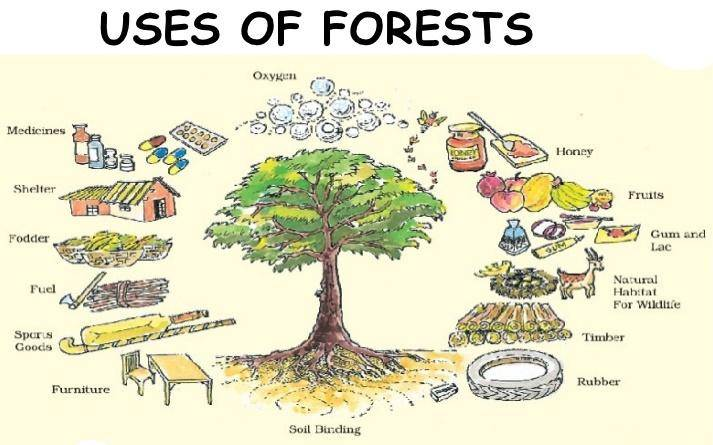 Figure 1: Uses of forests
Importance of trees to provide a natural habitat

Forests provide a sustainable environment for the survival of millions of animals. It is home for several species including snakes, turtles, crocodiles, insects, birds, butterflies, monkeys, and other wild animals. It provides an ecosystem for the animals to thrive. The forest floor is also a rich medium for microorganisms, which are essential for the conversion of dead matter into nutrients. Forests are also home to indigenous people who depend on them for their livelihood.
Importance of forests as watershed regions

Forest-based water tables, rivers, streams, and lakes are critical sources of water. The green cover preserves the water reserves from sun radiation. The Amazon forest is home to the world’s largest watershed and river system.
Importance of forests to support biodiversity

Globally, around 90% of the species including various plants and animals thrive in forests. They offer the necessary habitat and support biodiversity. They are home to the genes of biodiversity.
Importance of forests to purify the air

Photosynthesis is a critical function of plants to generate food and energy. Plants, shrubs, and trees absorb carbon dioxide from the atmosphere during daytime and release oxygen. According to an estimate, an acre of mature trees can provide oxygen for 18 people. They act as giant lungs purifying the air in the atmosphere by removing carbon dioxide and maintaining balanced levels of oxygen that we breathe every day. Trees absorb odors and pollutant gases like ammonia, and sulfur dioxide out of the air. These toxins are trapped in the leaves and barks.
Importance of trees to regulate global temperatures

Forests provide green cover which absorbs the sun’s radiation and keeps the temperature down. They regulate atmospheric temperature through evapotranspiration and breeze. Forests also promote rainfall that helps in maintaining the water table and a cool climate. Deforestation has the opposite effect causing the global temperature to rise dramatically.
Importance of forests to enrich the soil

Dead leaves and broken branches ultimately are converted to soil through the decomposition process and this conversion enriches the soil with nutrients. Microorganisms present in the soil convert the biodegradable material to simpler particles that can be utilized by the plants again. Trees have very strong roots that hold the soil intact in cases of floods or any other reasons that cause soil erosion. They are very critical in hilly areas or stream slopes as they slow the runoff and keep the soil intact. Uncontrolled soil erosion can destroy the fertile soil leading to barren conditions.
Importance of forests to regulate the water cycle

Forest is an important component of the water cycle process. They regulate evaporation, condensation, and precipitation of the water. They also nourish the aquifers thereby replenishing groundwater supplies. Trees allow the rainwater to flow down the trunk into the soil thereby preventing the stormwater from carrying pollutants to the ocean. They act as giant sponges that filter water and recharge the water table.
Importance of forests in our life

Forests are rich in herbs, plants, and trees of medicinal value. The extracts, seeds, leaves, barks from these plants and trees treat several diseases while being non-toxic to the human body. Some examples include quinine, curare, rosy periwinkle, wild yams, extracts of willow trees, calabar bean, and samambaia.
Forests provide economic benefits

Forests have a lot to offer to human beings. Every component of a tree including leaves, branches, stem, bark, fruits, seeds, and root are useful. Forests provide wood, timber, raw materials, vegetables, and fruits, which have significant economic value. The timber is used in construction and making furniture. Wood is also essential in the production of paper. The rubber extracted from trees is used to make several products. Even green waste has economic significance.
Millions of trees are chopped off every year to support the increasing need of human beings. We have to take proactive measures to preserve forests and increase the green cover in the interest of millions of living beings that depend on it.