VIEW MORE
What is Benzene?

Benzene is a colourless, flammable chemical used for various purposes. It is a highly toxic solution and carcinogenic (cancer causing), which has limited its use in applications today compared to the nineteenth century when it was invented.
It is generally used as a precursor in the manufacturing of complex compounds like petroleum products. One of its distinct properties is the odour, which is what gives petroleum products like petrol, kerosene, and natural gas their signature smell. This smell is important because it allows people to identify if there’s a leakage, whether in a factory capacity or a household.
Benzene is one of the most widely used chemicals in the world, with applications ranging from detergents to use in rubber manufacturing. It is also found on various products that we used to use on a daily basis. Some of these products are listed below. However, it should be noted that non-industrial usage has been limited due to its carcinogenic properties.

Benzene is made up of six atoms of carbon and six atoms of hydrogen. Therefore, its chemical formula is C6H6. Due to this property, it is also known as a hydrocarbon. It has alternating
double bonds and that’s why classified as an aromatic hydrocarbon. It is also a natural ingredient in crude oil.
Structure of Benzene

Figure 1. - Different ways to show the structure of Benzene

As shown in the above representation of Benzene (three forms), it is made up of six atoms of carbon and hydrogen each. Although it is distant from its parents, alkane and hexane, the pi-bond characteristics make it a preferred ingredient in chemical compositions where a pungent smell is a required property.
As shown in the eight representation in the diagram below, Benzene is often depicted with a circle inside a hexagon to showcase its nature of bonding, which is stable. 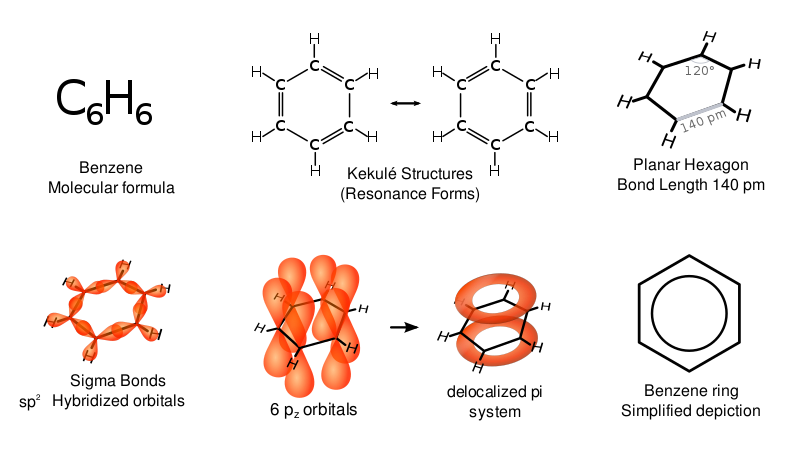 However, in basic chemistry, there are three ways of drawing the structure of Benzene. They are:

English scientist Michael Faraday is credited with identifying benzene in 1825, which was in the form of an oily residue during an experiment involving the production of illuminating gas. Experiments in production began in 1833 through a combination of benzoic acid and lime. After a series of more experiments and identifications in the nineteenth century,benzene became a common chemical for use in petroleum by the early twentieth century.

It had been used as an aftershave, decaffeinate, and degreasing. Since all of these involved its contact with humans, and since it was soon found that benzene has carcinogenic properties, its usage was soon stopped. Over the decades, lesser toxic solutions have been identified as alternatives for those purposes.
However, this has not limited its use in industrial applications such as the production of petroleum and plastic products.

Early Applications of Benzene
As stated above, Benzene was used in various applications as a catalyst. Here are some of those applications, most of which were recalled when it was found that the chemical solution is extremely toxic in nature.

For coffee decaffeination and the subsequent production of Sanka, a popular brand of decaffeinated coffee that was sold in the roaring twenties; it was later recalled due to the toxicity

Although some of these applications still find a place for benzene, many of them have been discontinued. This is supported by the identification of cheaper and healthier alternatives.

Modern Applications of Benzene
Although it is a harmful compound for humans, it is still a widely used solution for some of these applications:

Exposure to Benzene
As mentioned above, Benzene is a highly toxic substance that can cause cancer. Its exposure can have serious effects on humans as noted below:

Due to these effects, there are limitations to the use of Benzene in almost all industries. Government and organizations have come together to place these regulations so that workers involved in their production or usage do not fall prey to its harmful effects.

Occurrence of Benzene
The primary source of Benzene is produced out of petrochemicals, where it is a by-product. It is the only way to mass-produce benzene as all other natural sources produce it as traces.
Other such sources are coal, natural oil, and coke production. Countries like China, the United States, and regions of the Middle East and Africa are expanding on the production of Benzene due to its increasing demand.

Benzene Alternatives
Toluene and Xylene are two compounds that have replaced Benzene in almost all modern applications. However, this has only limited its usage. Benzene is still a widely used chemical solution.
VIEW MORE
Claim your FREE Seat in Vedantu Master Classes!
Register now
sign in