Ammonia molecule is:
(A) A nucleophile
(B) An electron deficient molecule
(C) A homolytic molecule
(D) An acid 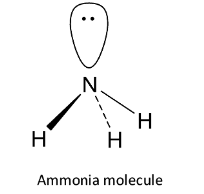 Thus ammonia contains a lone pair of electrons but has no charge. Hence, it is a neutral nucleophile. So, option A is correct.
An electron deficient molecule will try to take electrons from other sources and thus it is electron loving. Therefore, it will be an electrophile. So, option B is wrong.
A homolytic molecule undergoes homolytic fission to give free radicals. In homolytic bond fission, the shared pair of electrons is distributed equally between two bonded atoms. So, option C is wrong.
According to the Lewis concept, an electrophile accepts an electron pair and hence it acts as a Lewis acid and a nucleophile can donate an electron pair and hence it acts as a Lewis base. Thus ammonia is a base and not an acid.

So, option D is wrong.