One of the primary driving factors in the development of our civilization is the communication system. We have developed exemplary systems to communicate, omitting the hurdles of distance. The chapter Communication Systems in Class 12 Physics will explain how these systems work and how they are used in the modern world. This chapter will explain the scientific principles followed to develop a communication system for the exchange of information. To understand the concepts of this chapter, refer to the Communication System notes prepared by Vedantu.

The subject matter experts have compiled these notes with the prime aim of discussing the importance of a communication system in a concise format. The easier explanation of the fundamental principles of this chapter will help NEET aspirants to prepare and revise faster.

Download PDF of Revision Notes on Communication Systems for NEET 2023

Elements of a Communication System

All living things communicate at all phases of their lives. Regardless of the type, every communication system needs three components: the transmitter, the medium or channel, and the receiver.

There are Two Basic Modes of Communication: Point-to-point and Broadcast.

The message signal in a communication system may take the form of voice, music, a picture, or computer data. These signals each have a different frequency range. Depending on the band of frequencies thought to be crucial for transmission, a specific signal will require a specific type of communication system.

Different types of transmission media offer a range of bandwidths, much like message signals. Wire, open space and fibre optic cable are the three most often utilised transmission media. The bandwidth of coaxial cable, a commonly utilised wire media, is about $750 \mathrm{MHz}$. These cables are often operated at frequencies lower than $18 \mathrm{GHz}$. Radio waves are used for communication over free space at a very wide range of frequencies, from a few hundreds of kHz to a few GHz.

Propagation of Electromagnetic Waves In Atmosphere:

In this mode, the earth directs the radio waves, which move from the transmitter to the receiver along the earth's curving surface.

There are two types of surface wave propagations.

Surface field strength increases when the separation between the transmitting and receiving antennas is small. 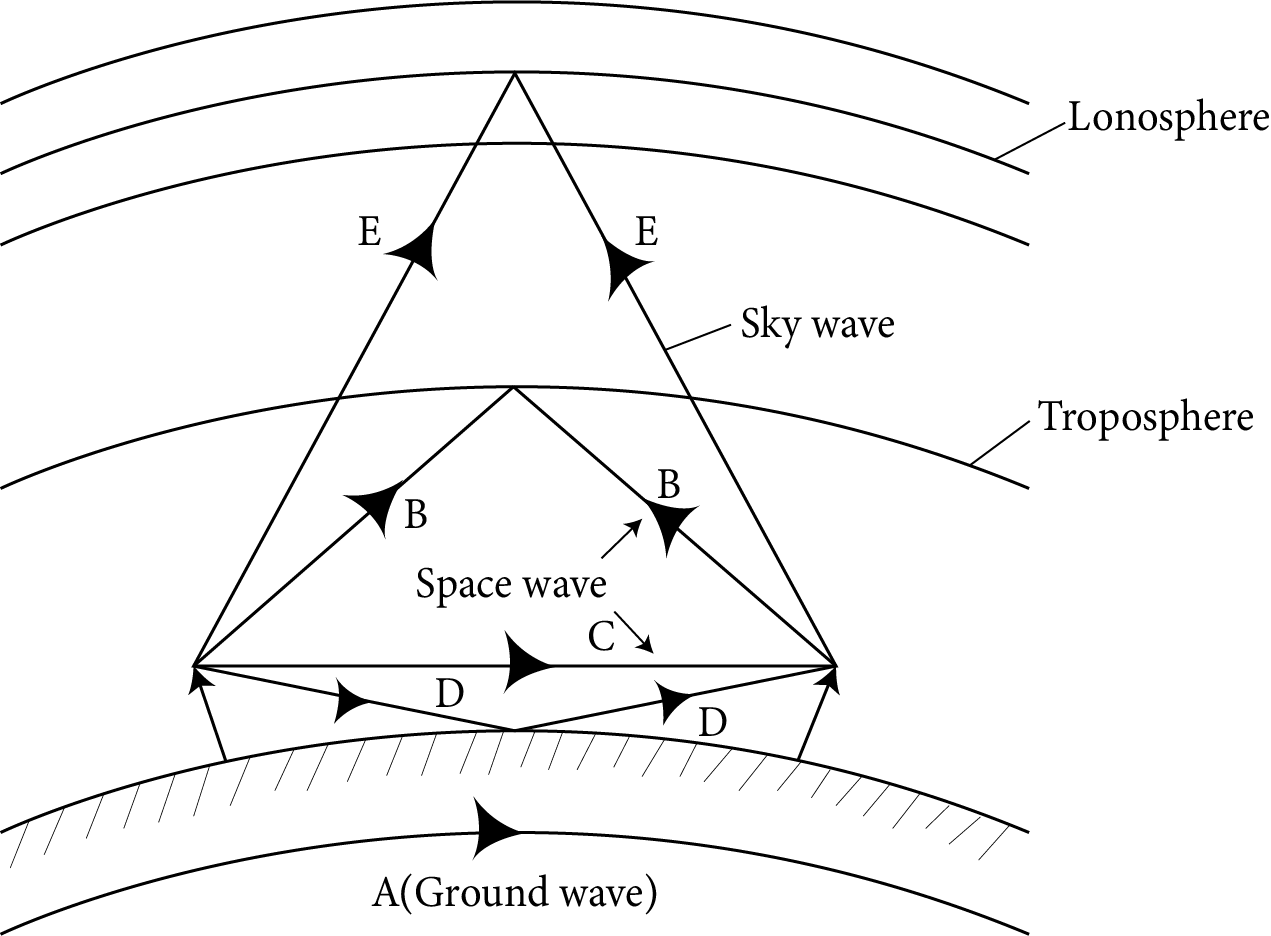 The antennas' heights and separations can be specified as follows to avoid attenuation and signal strength loss:

$\mathrm{D}_{\mathrm{m}}$ : distance between the two antennas

R: radius of the earth

Radio communications over great distances require a technique called ionospheric propagation. Due to route bending brought on by ionisation in the higher air layer, the energy content of the wave in this form of propagation reaches the receiving antenna (ionosphere). The ionisation in the ionosphere is not uniform but it is stratified, i.e. in the form of layers. The layers are designed as $\mathrm{D}, \mathrm{E}, \mathrm{F}$ and $\mathrm{F}_{2}$ layers.

Modulation and its necessity

A communication system's main objective is to send information or message signals, as was already established. Baseband signals, which effectively refer to the band of frequencies that represents the initial signal as transmitted by the information source, are another name for message signals. The signal bandwidth is the range of frequencies that the signal spans because, in general, no signal has a single frequency sinusoid. Let's say we want to send an electronic signal straight over a long distance in the audio frequency (AF) range $(20 \mathrm{kHz}$  or less for baseband signals).

Size of the antenna or aerial

An antenna or aerial is required for signal transmission. In order for the antenna to accurately perceive the time variation of the signal, it must be at least $\lambda / 4$ in diameter and have a size comparable to the wavelength of the signal. The wavelength $\lambda$ of an electromagnetic wave with a frequency of $20 \mathrm{kHz}$ is $15 \mathrm{~km}$. It should go without saying that such a long antenna is impossible to build and maintain.

Effective power radiated by an antenna

According to a theoretical analysis of radiation from a linear antenna, the power emitted is proportional to  $(\ell / \lambda)^{2}$. This suggests that the power emitted increases with decreasing $\lambda$, or rising frequency, for a given antenna length. Therefore, a long-wavelength baseband signal would have little effective power. High powers are required for effective transmission, which highlights the necessity of adopting high-frequency transmission.

Mixing up of signals from different transmitters

Another compelling defence against the direct transmission of baseband signals is more pragmatic in character. Let's say a lot of individuals are chatting at once or a lot of transmitters are sending baseband information signals at once. Because it will be difficult to tell one signal from another when they are mixed up,

This suggests a potential solution, which involves leveraging high-frequency communication and allocating a band of frequencies for the delivery of each message signal.

According to the aforementioned considerations, it is necessary to convert the original low-frequency baseband message or information signal into a high-frequency wave before transmission so that the translated signal retains the original signal's information.

Different types of pulse modulation are: 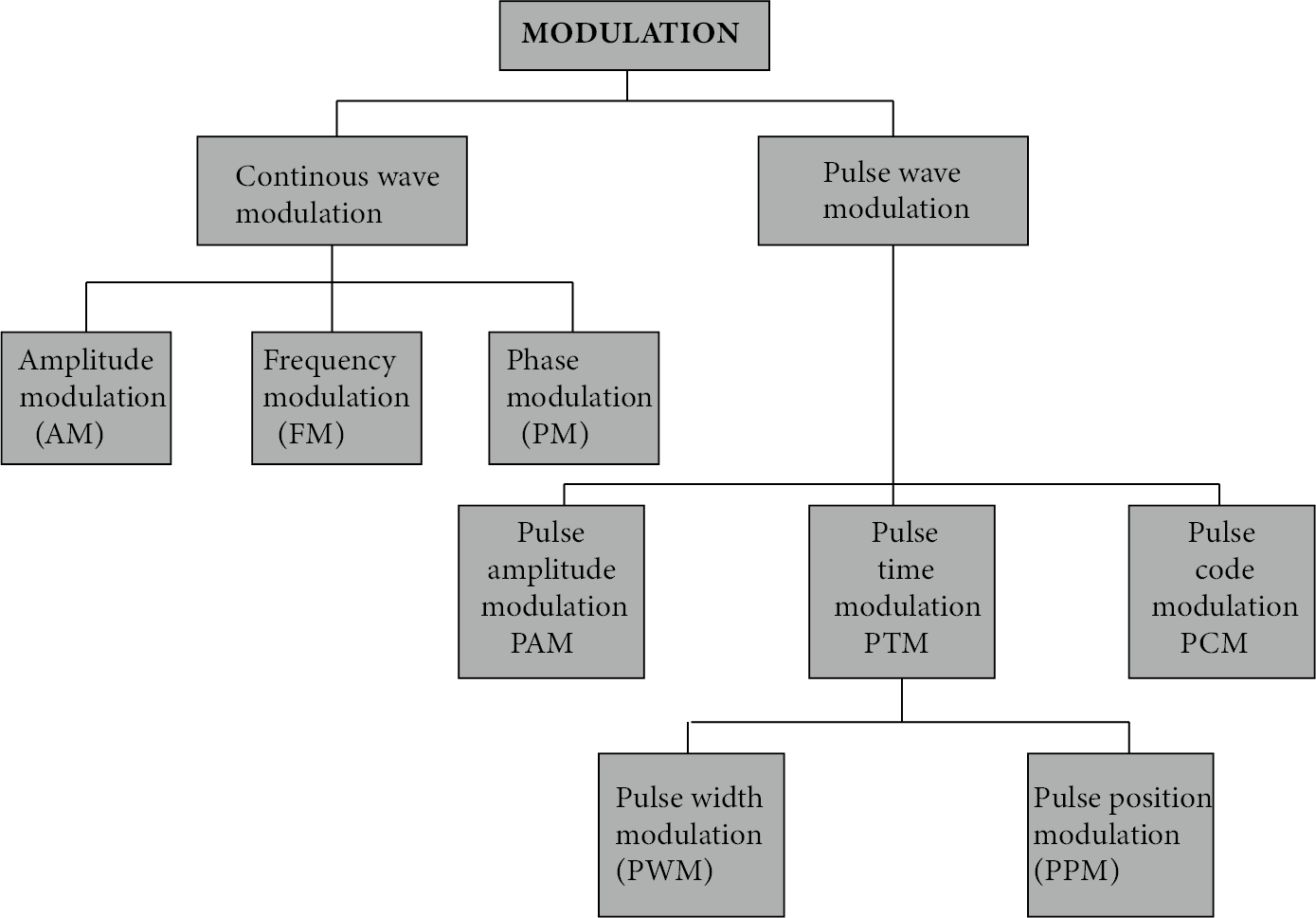 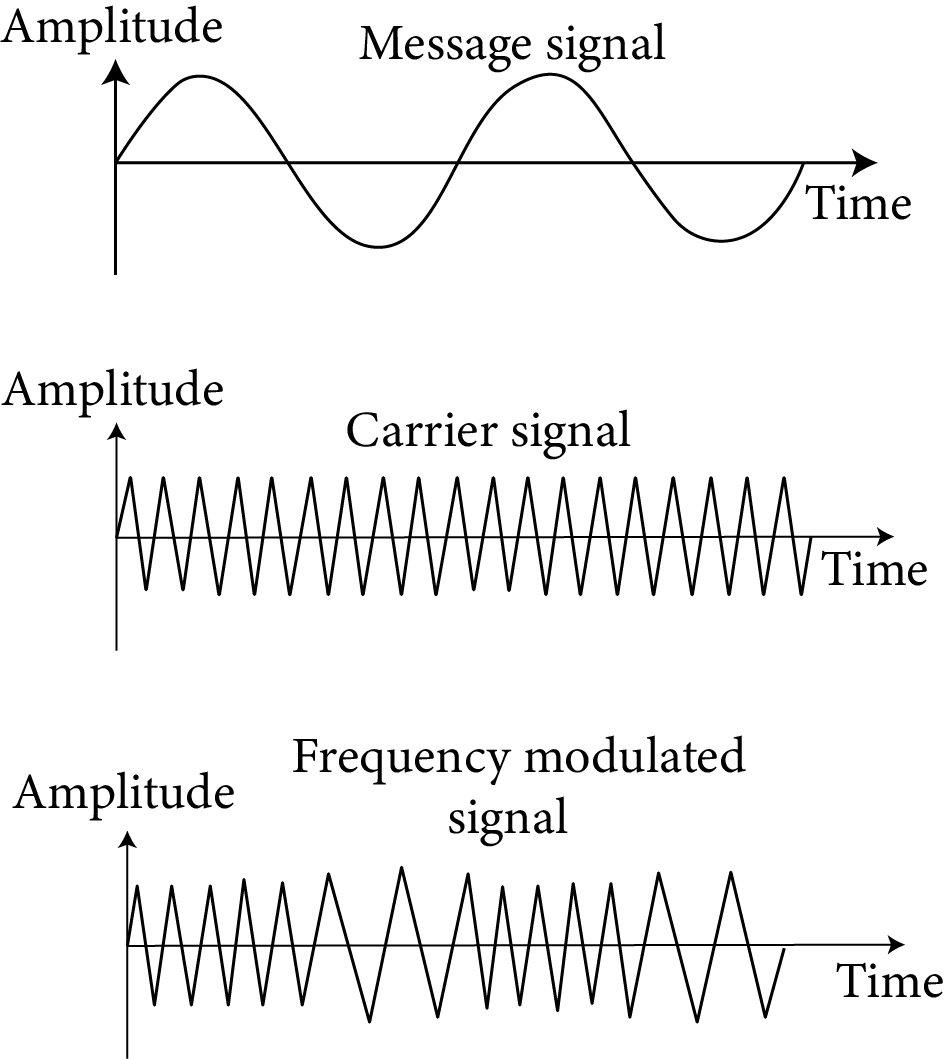 Side band frequencies and bandwidth in AM wave

Side band frequencies are generally close to the carrier frequency.

There are numerous ways to achieve amplitude modulation. The block diagram in figure illustrates a conceptually straightforward method.

When a message is transmitted, it weakens as it travels across the channel. An amplifier and a detector should consequently come after the receiving antenna. Additionally, the carrier frequency is typically shifted to a lower frequency by what is known as an intermediate frequency (IF) step prior to the detection to aid in further processing. It may be necessary to amp up the detected signal because it might not be powerful enough to be useful. Figure displays a block diagram of a typical receiver.

Frequency modulation equations mainly consist of a sinusoidal expression with the integral of the baseband signal that can be either a sine or cosine function.

It can be represented mathematically as;

$\theta \rightarrow$ is the phase of the modulating signal.

Such as amplitude modulation, when we try to modulate an input signal (information), we need a carrier wave,

Angular modulation, which means $\omega_{c}$ (or) $\theta$ of the carrier wave, starts varying linearly with respect to the modulating signal like amplitude modulation. Frequency modulation is the process of altering a carrier wave's frequency to match an audio frequency signal.

Amplitude modulated (AM) waves can be detected or demodulated using a diode. A diode essentially performs the function of a rectifier by reducing the modulated carrier wave to just the positive envelope.

The figure depicts the AM wave input. It appears as a rectified wave at the diode's output across PQ (since a diode conducts only in the positive half cycle). After going via the RC network, this rectified wave is devoid of the radio frequency carrier component.

When we look around, we may observe many individuals conversing on cell phones or mobile phones in marketplaces, on trains and buses, and as they cross streets. The way we interact and live has changed thanks to mobile phones. The appearance and functionality of mobile phones have changed along with technological innovation. In addition to making and receiving phone calls, the newest mobile phones also allow users to:

Example 1: An antenna is mounted on a $400 \mathrm{~m}$ tall building. What will be the wavelength of signal that can be radiated effectively by the transmission tower upto a range of $44 \mathrm{~km}$ ?

Example 2: A transmitting antenna at top of a tower has a height of $50 \mathrm{~m}$ and the height of the receiving antenna is $80 \mathrm{~m}$. What is the range of communication for Line of Sight (LoS) mode? Common Errors or Mistakes that Should be Avoided by the Students Keeping the Exam Point of View:

This chapter focuses on explaining the principles of communication systems used across the world. It explains how information is interpreted by a complex system of electronics such as a transmitter, channel, and receiver.

A signal is developed by the transmitter to send information to a receiver located at a distance. The distance can be quite far. It all depends on the strength of the bandwidth of a communication system sending messages.

In this chapter, students will learn the different types of communication systems used to send information according to the differences in the bandwidth of the radio signals sent. These signals are measured using the units of the frequency.

On proceeding further, it will explain what sky-wave propagation is and what critical frequency stands for. The mathematical expressions of all these terms will explain how we calculate and calibrate them to maintain a relentless communication channel. The use of Communication System notes for JEE Advanced will simplify the concepts so that the aspirants can understand them faster.

This chapter will also explain what remote sensing is and how we can modulate radio waves. The concept of developing a communication channel solely depends on radio waves sent across the world.

These revision notes will be the best study material you can have for free to complete studying this chapter. Revise this chapter in no time and use the easier format to remember the crucial concepts of communication systems. You can download and use this file according to your study sessions to add more convenience.

FAQs on Revision Notes on Communication Systems for NEET 2023

1. What is a digital signal?

A signal where the voltage or current has only two values is termed a digital signal.

2. What is an analogue signal?

An analogue signal can be defined as a signal that can change or modulate its magnitude of voltage or current relentlessly in accordance with time.

3. What is the transmission of signals?

The process of converting information into signals and sending them to a distant receiver is called the transmission of signals. It is done by using a transmitter. On the other end, a receiver receives the signals sent by a transmitter.

4. What do you mean by a communication channel?

According to the concepts of the communication systems, a channel or a path is set between a sender and a receiver for exchanging information. This channel is set by a system that can interpret information into radio signals and can transmit it using a transmitter and received by a receiver. This is called a communication channel.